Mother on 2013 attack: ‘This is someone trying to kill me’ 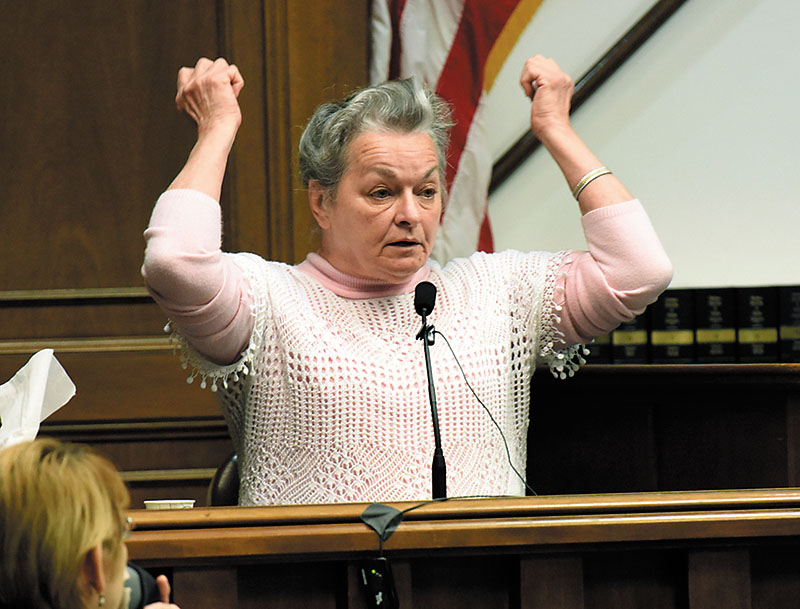 Sandra Steen on the witness stand shows how she tried to fight off her attacker. Photo by Wayne Hinshaw, for the Salisbury Post

SALISBURY — Sandra Steen said she was outside in “Nana’s Place,” where she sewed and did paperwork on occasion, when “I thought I heard raised voices.”

She gathered up some papers, cut off the lights in this building on her dad’s farm and started walking back toward the house along the driveway. It was then, she said, that a right arm came around her neck from behind.

Sandra immediately thought it was her son, Jeff Steen, picking on her and playing around. But she soon realized that the person meant to hurt her.

“I thought, ‘No, this is someone trying to kill me,'” Sandra Steen testified Thursday during the second day of the Rowan County trial in which Jeff Steen is accused of murdering his grandfather, 78-year-old J.D. Furr, and attempting to kill his mother.

Prosecutors say Furr was bludgeoned to death with a potato hoe, a tool kept near his farmhouse’s back door.

Furr’s death on his River Road farm near Richfield and the attack on Sandra Steen, after which she lay helpless for about 12 hours on a freezing night, happened Nov. 5, 2013.

With Sandra Steen on the stand all day Thursday, District Attorney Brandy Cook continued to build the state’s case that Jeff Steen’s money problems and his wish to inherit Furr’s farm lay at the root of his alleged crimes.

A second recording was made later the same day at CMC. A video recording was done Nov. 7, 2013 — again, at CMC. And Sandra Steen was still recovering at CMC on Nov. 21, 2013, when detectives conducted a video interview again.

Some inconsistencies surfaced between Sandra Steen’s morning testimony Thursday and what she told detectives in the recordings. In one interview, she said her assailant wore a ski mask and didn’t appear to have her son’s eyes.

“It was too short to be Jeff,” she added.

In another interview, she told detectives they were “barking up the wrong tree” if they thought Jeff could have committed these crimes.

At another point, she said she spent the night lying on the ground thinking maybe it was Jeff who had attacked her. But she told detectives she changed her mind in the morning when Jeff drove up to the farm and she heard his screaming reaction to finding his grandfather dead and her beaten.

When he couldn’t find a blanket, Jeff lay over his mother to keep her warm while they waited for 911 emergency responders to reach the farm the morning of Nov. 6, 2013, Sandra Steen testified.

But also during her courtroom testimony Thursday, as she described her attack to Cook, Sandra Steen said it had felt like Jeff’s arm coming around her neck that night.

The attacker, she testified, put his left hand over her nose and mouth, while she used her hands to punch and scratch and tried to kick backward with her right foot. “Then everything went black,” she said.

She said  her next memory was of opening an eye to see Jeff’s face. “Then everything went black again,” she said. “… I saw his face, and I thought he had come to help me.”

Sandra Steen described a remainder of the night in which she slipped in and out of consciousness. She said her legs wouldn’t work, her ribs hurt bad, and her hands were swollen, making it hard for her to grasp any grass and crawl.

She said she yelled on occasion, hoping her father would hear her from the house, but all she did was rouse the cows, chickens and ducks.

“Everybody was answering but Daddy,” she said.

The papers she had dropped during the attack were on the ground in front of her and bloody. Cook showed the jury photographs of other things found on the ground around Sandra Steen, including keys, a right shoe, water bottle, reading glasses and the bottom plate of her dentures.

Part of her left ear would have to be sewed back on. She was suffering from hypothermia.

Steen said she spent the night trying to reach a clothesline pole in the yard, thinking maybe she could pull herself up, but she couldn’t do it.

Sometime in the morning after daybreak, she testified, she heard Jeff scream, “Grandpa, Grandpa, oh, no,” and then he soon yelled, “Mama, where are you?”

“I hollered to let him know where I was,” Steen said. She told him to call 911, which he did, and they waited together. He told her Furr was not breathing and lying at the bottom of the back steps.

Steen told Cook it was unusual for her son to be at the farm in the morning. At the time, he was working the third shift at Norandal in Salisbury, and he usually went home to sleep after his shift.

Steen, who had been working as a nurse with Bayada, would spend three weeks in the hospital, including a week in intensive care. “I felt like I was in a bad dream,” she said.

It was more than six months before Steen, now 65, could drive again. She returned to the farm, where she had been living about two years before her father’s death. In court Thursday, she used a cane and said she has had balance problems since the attack.

She is on disability but hopes she can return to work. “I like to be around people, and I just like staying busy,” she said.

Sandra Steen testified that Jeff had been at the Furr house Nov. 5, 2013, to fix a ceiling fan in a back bedroom. He and his son, Jordan, left to retrieve a similar light for the fan Jeff had at his house, and Jeff returned later by himself and finished the job.

Steen said she showed her son a loan statement from Springfield Financial and discussed how he would pay her back for that loan. At one point, Jeff Steen accompanied his mother out to the Nana’s Place building, where she wanted to show him a porcelain doll she had purchased in Texas for one of Jeff’s daughters.

They went back to the house, and Jeff Steen and Furr were having a conversation while she was organizing stuff from her recent trip to Texas. She had to take items out to Nana’s Place, she said, and she also stopped by her car for some items.

According to testimony, she saw Jeff come down the back steps and he said he was going to work. Meanwhile, she went inside her building and stayed five to 10 minutes, Steen said.

She added she did not remember Jeff getting into a vehicle or driving away. Soon after she left Nana’s Place and headed for the house, the attack happened.

Testimony revealed Sandra had made at least six car payments — over $400 a payment — for her son over two years. He rarely made his payments, Steen said.

She had taken out a loan from Springfield Investments to help with her credit card debt and her son’s financial needs.

“We were going to get caught up,” Steen said. They faced 37 payments of $130 each, and Jeff had promised he would make the payments until the following January, when he planned to borrow from his 401-k retirement plan and pay everything off.

Jeff was on her cellphone plan, too, and was never paying his portion of the bill. “He just kept putting me off,” Steen testified.

Steen estimated that Jeff owed her about $6,000, and she said Furr had told his grandson he wasn’t going to help him any longer. Jeff was paying child support and never seemed to have money.

Steen said her father was irritated with Jeff “because he wasn’t stepping up to the plate.”

Together, Furr and Sandra Steen also were frustrated with Jeff’s repeatedly dropping off his three daughters every other weekend when he had custody, then leaving for the beach with his girlfriend.

Steen testified it was her and Jeff’s understanding that if her father died, she would inherit the farm, and it would pass to Jeff at her death. In reality, Steen and her sister inherited the farm.

Steen said Jeff talked about the farm all the time and had a place picked out where he wanted to build a house someday. “He loved the farm,” she said.

In other testimony, Sandra Steen described how her father kept a large sum of cash — upward of $10,000 — in a metal work building on the farm. The key to that metal box was either in his wallet or on one of his key chains, she said.

Furr also kept cash in individual envelopes and cigar boxes in the house, according to his daughter. She guessed he usually kept about $400 in cash in his wallet.

Cook asked Steen about her own relationship with Furr.

“Dad and I were real close,” she said. “… We just had a good dad-daughter relationship. I loved that man.”