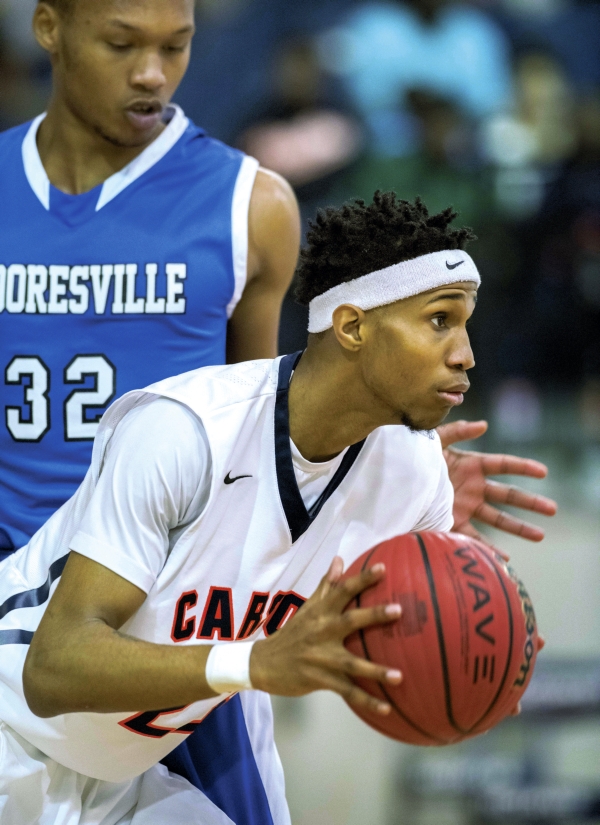 In the third it landed a haymaker and paraded off triumphantly, 78-49.

“I liked the way we came out in the second half and made those three big threes,” winning coach Brian Perry said after Carson (10-5, 7-3 SPC) snapped a two-game losing streak. “It was important to get that separation.”

It changed the game. East (3-13, 1-9) — seeking a rare, second consecutive win — erased an early 12-point deficit and nudged ahead 22-20 when sophomore Gabe Hinceman drained a 3-pointer with 5:10 remaining in the first half. Two minutes later teammate Brandon Jefferson’s bucket put the Mustangs in front, 26-25.

“Sometimes your best defense is your offense,” said East coach Kurt Misenheimer. “Sometimes when you convert on two or three possessions in a row, you think you can do it all the time.”

It’s a good thing the word ‘panic’ doesn’t appear in Carson’s playbook. The Cougars responded with a 10-1 run to close the first half, then used successive 3-pointers by Cole Perry, Jamarius Hairston and Brenden Westbrook to open the third quarter, delivering a knockout blow.

“We just had to keep our cool,” Carson guard Jailen Williams said Carson stretched an eight-point halftime lead to 44-27. “We were slipping defensively — until the second half when we made that run. That’s what we wanted to do and it worked out perfectly.”

It did, largely because of Hairston. The 6-foot-4 junior played like his Nike’s were on fire — driving for scoop layups, drawing fouls and collecting free throws and measuring up 3-pointers from anywhere on the floor. By game’s end he netted a season-best 29 points.

“After I hit my first shot (a 12-foot jumper), I felt the flow coming through me,” Hairston said with a post-game smile. “Then, when I hit a three from the corner, the rest of it started coming.”

Hairston, a nephew of former West Rowan standout Junior Hairston, is averaging 18.5 points-per-game for the Cougars, so none of this surprised Perry.

“We rely on him to score,” the coach said. “When he has big scoring games, we typically play pretty well. But when he’s scoring like that, and we’re making 3-pointers, you always have to look at Jailen Williams. Because Jailen is getting into the lane and kicking it out, giving us good looks.”

Williams is a 5-9 junior who has played with Hairston nearly year-round since they were 8-year olds.

“I love playing with him,” he said. “We feed off of each other. He knows when to drop down and how to get open. I know how to get him the ball.”

It’s produced an ‘A’ in chemistry this season. Carson took a 46-29 lead two minutes into the third period when Hairston took a pass from Williams and drove the lane for a layup. It stayed a double-digit difference for the rest of the night, reaching 28 points when Cameron Prugh was fouled intentionally and hit a pair of free throws with 2:21 to play, capping a 12-0 scoring spree.

“They hit more shots and hit more free throws,” Misenheimer said after East was limited to seven field goals in the second half. “I mean, we had lots of shots from the perimeter and got shots inside. We had opportunities. We just didn’t hit them.”

NOTES: Cole Perry, the coach’s nephew, matched his season-high with 15 points. Williams (13) gave Carson three scorers in double figures. … Carson made nine 3-pointers and East seven. Both teams return to SPC play next Friday, following a week of exams. … Hinceman had 11 points for East and Bryson Sprinkle contributed 10 0ff the bench. … Prugh played for the first time since undergoing surgery three weeks ago and was one tough hombre. He scored seven of his eight points in the fourth period.

From staff and wire reports North Rowan Middle’s top-seeded boys basketball team advanced in the first round of the conference... read more