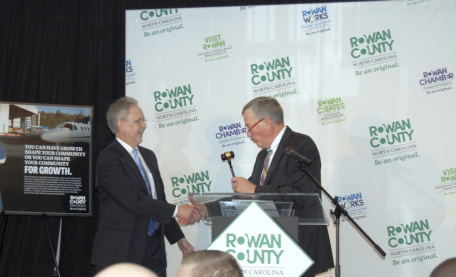 The event was sold out for the fourth year in a row.

The gala’s title sponsor was Novant Health Rowan Medical Center. It was held in cooperation with RowanWORKS Economic Development and the Rowan County Convention & Visitors Bureau.

The county’s new brand, “Be an Original,” was prominently featured, with two marketing videos showcasing it shown throughout the night.

Now Are the Foxes, a local improvisation group led by Cale Evans, kept the night rolling along with jokes between the speakers.

The gavel was passed from Ted Goins, 2016 chairman of the board, to Tim Norris, the 2017 chairman.

Goins, of Lutheran Services Carolinas, said it had been an honor to work with the chamber’s staff and business and community leaders for the good of businesses in the area.

Norris said he has learned a lot from Goins.

“He’s a guy that leads with a steady hand,” he said.

Norris presented the top priorities that came from a planning meeting, which included, “promote a positive Rowan brand and leveraging the chamber’s assets for increased community pride, work with law enforcement on crime prevention programs and youth engagement roles for the business community, and support and promote pro-business policies that help recruit and retain jobs, investment and talent in our community.”

Norris also said he wants the chamber to become a “sane center.”

“Your chamber will be a thoughtful, intelligent catalyst for seeking positive synergies and collaboration opportunities in the community,” he said.

Norris said the chamber takes the role of business advocacy seriously and will continue to lobby on behalf of businesses.

Representatives of RowanWORKS presented statistics from the past year and introduced Kendall Henderson, the new director of business development.

James Meacham, CEO of the Salisbury-Rowan Visitors and Conventions Bureau, ended the night by asking the audience to look for the Rowan Originals who were not represented among them so they could also be celebrated.

He also teased a new award for 2018 and hinted that it will have something to do with being a Rowan Original with another video.

The award winners were:

Autopsy: Laurent had 10 gunshot wounds from execution of…