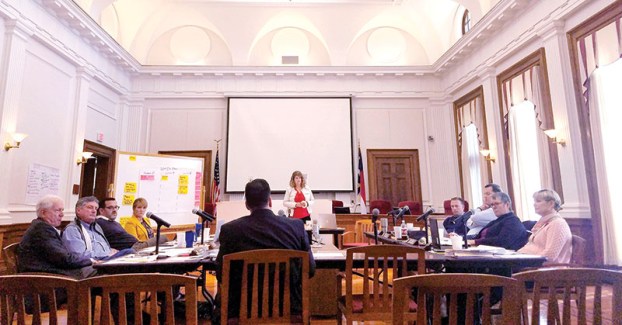 Josh Bergeron / Salisbury Post - County Commissioners and staff on Thursday listen to a representative of Charlotte-based ADW Architects during discussion about the next steps for West End Plaza.

For months now, the county has rented space at West End Plaza to third-party groups seeking events space. With the purchase of chairs and tables and other minor improvements, the county turned a former J.C. Penney store into an events center.

When commissioners gathered Thursday to discuss the future of West End Plaza, they informally agreed to take a number of small steps — starting a feasibility study about a convention or events center at West End Plaza, making some renovations to the former Penney building and making other site improvements— as money allows. However, the commissioners could not agree on when to build a convention center or if Rowan County could sustain such a facility.

The discussion included a testy exchange between Commissioner Craig Pierce and Commissioners Chairman Greg Edds. Pierce started by saying that local hotels could not handle large crowds of visitors.

“I’m not going to have the hotel people telling us that they don’t want us to grow,” Edds said.

“They’re telling us they can’t handle a large group,” he said.

“I’m not worried about that,” he said. “We start bringing folks here for tourism, they will build it, and I don’t care what the hoteliers say about, ‘Hey, slow down y’all; don’t do too much around here.’

“We shouldn’t be limited by what we’ve got now,” Edds continued. “We need to start thinking bigger. That’s our problem. We stood at the interstate with a ‘go around’ sign. ‘Y’all go on around, don’t come here.’ I won’t accept that at all.”

Some commissioners questioned whether Rowan County could attract enough events to make a convention center worthwhile.

Commissioner Mike Caskey was the first to propose a feasibility study to determine whether the county needs a convention center. Caskey said he would not vote for one unless a study showed it could succeed. Caskey’s suggestion became a middle ground among the commissioners.

If the board approves a study, it would be the second one in recent history. The Salisbury City Council completed a convention center study in the mid-2000s. At the time, Susan Kluttz was mayor. The site under consideration was the building where Integro Technologies is located. Currently, there is no city-owned convention center.

Commissioners Vice Chairman Jim Greene on Thursday said it’s “common sense” to conduct a feasibility study before building a convention center. However, he also said it’s time for the commissioners to “start making some decisions” at West End Plaza. Commissioners “keep kicking the can down the road,” he said. If the board doesn’t make decisions soon, it may be best to sell the former shopping mall, he said.

Discussion about whether to build a convention center also came up when commissioners were told that West End Plaza needs $22 million in improvements by an architectural firm hired to oversee work there.

Pierce framed Thursday’s discussions in the context of the many projects on the county’s plate. When commissioners purchased the former Salisbury Mall and named it West End Plaza in 2013, a county-owned water and sewer system was just a concept, Interstate 85’s widening wasn’t scheduled until 2022 and an interstate exit at Old Beatty Ford Road was further in the future, Pierce said.

The county purchased West End Plaza in 2013 because a number of departments needed office space.

So far, the most significant construction work at the facility includes replacing part of the roof and moving the county Veterans Services and Board of Elections there. Social Services and the Health Department are next on the move-in list.

At one point during discussions, a commissioner said that employees in cramped offices have not been forced to sit on the floor or work in closets. County Manager Aaron Church said that’s not entirely true, but he added that he does not get regular complaints from county departments about a need for space.

By Josh Bergeron josh.bergeron@salisburypost.com ROCKWELL — East Rowan will be the first site of a new job-training program developed by... read more