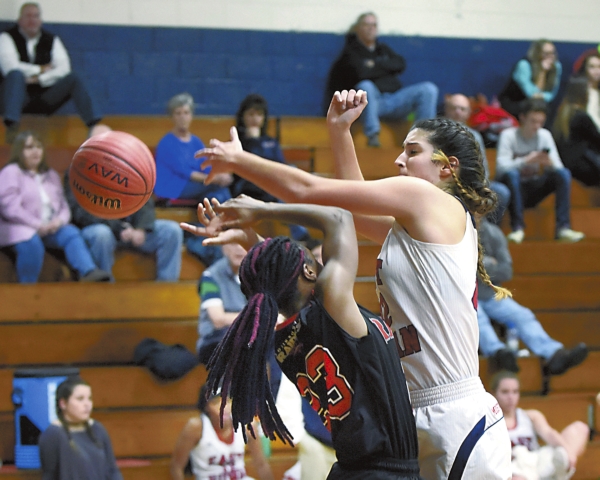 Downs, a 5-9 guard, outscored the Mustangs by herself with 28 points on a dazzling array of drives, scoop shots and three-point plays. It was close to her career-high of 30 and drew her closer to the 1,000-point career mark.

“Janiya is a special basketball player,” said Raider head coach John Davis. “She has got a great work ethic. She defends, she scores, she passes and she rebounds. Just a lot of positives for her.”

The win, coming off a long layoff for both teams due to the winter weather, evened South’s record at 4-4 in the South Piedmont conference, 8-6 overall. The Mustangs suffered through another cold shooting night and fell to 4-11, 1-8 in the SPC.

The Raiders sprinted out to a 13-2 first quarter lead as Downs scored eight points to go with a couple of blocks and two steals. It was the South defense that set the tone, however, as their pressing, trapping attack forced eight quick turnovers to build their margin.

“Pressure defense has really bothered us all year,” East coach Kevin Holland said. “We had so many turnovers in the first quarter we gave them that cushion. We played better in the second quarter, but by then we were already so far down.”

The margin stayed on double figures throughout the second quarter as East turned it over a total of 14 times. The Raider defense was also effective in shutting down the Mustangs inside game and keeping top scorer, point guard Adalie Harrison, scoreless for the game.

“That is one thing we bring to the court every game,” said Davis. “We play hard on defense and that is just effort. We didn’t always play smart defensively, but our speed was a bit of a difference tonight, too.”

Things did not get any better in the second half for the Mustangs as they managed just nine points. Downs put up seven quick points, then Keara McClary bombed in a 3-pointer to put the Raiders up, 37-15. South went to the bench in the fourth period and still expanded the lead to the final 29-point margin.

Downs was the only Raider in double figures and also had eight rebounds. Riley Corriher and Tazah Hardin contributed seven points each. The Mustangs were topped by reserves Gracie Honeycutt and Caroline Houpe with seven points each.