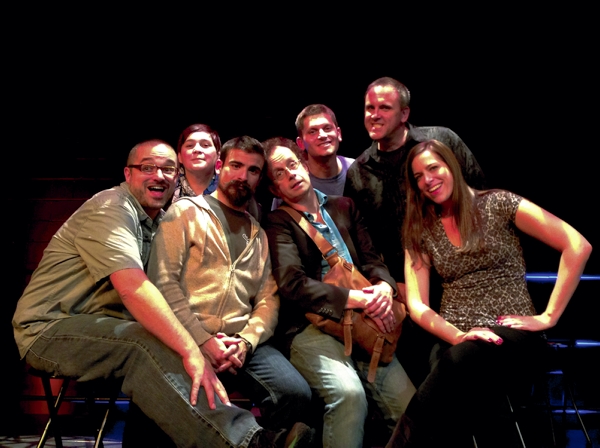 Now Are the Foxes pose with Kevin McDonald from The Kids In the Hall, after a show at Lee Street theatre.

There will be more than 25 improv, sketch and stand-up acts performing on Jan. 27-28. CHARLOTTE — Charlotte’s funniest unite for a weekend of shows and workshops.

This month, Queen City Comedy and Acting Out Studio will host the first ever Comedy Festival in Charlotte, led by Salisbury’s own Cale Evans.

The weekend will be packed with improv, sketch, and stand-up shows from Charlotte’s leading improvisors, actors and comedians.

There will be more than 25 acts performing on Friday, Jan. 27 and Saturday, Jan. 28 with insane names like Robot Johnson, Now Are the Foxes and Mom’s Adhesive.

There will also be workshops taught by local and regional instructors where aspiring performers can hone their comedy chops.

“Laughter is needed now more than ever, and this festival is intended to shine a spotlight on the fantastic comedy talent that exists in the Charlotte comedy community,” says festival co-founder Cale Evans.

According to the festival’s other co-founder Elizabeth Byland, “Some of the best improvisors and comedians in the country are right here in Charlotte. This first of its kind festival provides a showcase for them, and a chance for the rest of us to just laugh for a weekend.”

Held at Acting Out Studio, 8145 Ardrey Kell Road. Tickets are available at www.queencitycomedy.com

Submitted This year instructor Kindra Steenerson is offering three acting courses that are sure to inspire and educate: A beginner’s... read more