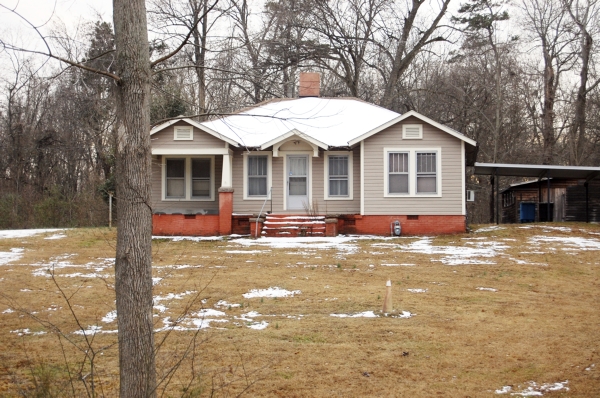 Amanda Raymond/Salisbury Post The Salisbury Parks and Recreation Department hopes to turn this property at 705 Ryan St. into offices for maintenance staff.

SALISBURY – The Parks and Recreation Department hopes to use a recently acquired property for offices for maintenance staff.

Nick Aceves, Parks and Recreation director, and Stephen Brown, maintenance manager, went before the Planning Board on Tuesday to discuss a special use permit to allow government services to operate from a single-family home at 705 Ryan St.

Brown said the department wants to convert the building into office space for the maintenance staff. They will update the driveway and put up a six-foot fence with barbed wire around three sides. The side of the fence that faces the street would be the one without barbed wire. There would also be a screen between the property and the neighboring residential property.

Preston Mitchell, Development Services manager, said it helps that the department is not tearing down the structure but instead adaptively reusing it. The problem may be making the property visually compatible with the rest of the area.

Mitchell also said it would help to bring in a Realtor or appraiser to testify that the proposal will not negatively affect surrounding property values when they go before City Council.

Chairman Bill Burgin suggested that the screen be extended to block the view of the chain link fence.

“I really think that will help you answer the question that visually it will feel like a neighborhood,” he said, adding that he did not think any other surrounding houses had chain link fences.

Board member Eric Phillips asked if barbed wire was necessary at all if it would not be across the front of the fence as well.

Board member Thomasina Paige said the barbed wire may suggest that something bad may happen in a neighborhood that is generally safe.

Aceves also said there were issues of vandalism and theft at another facility.

Later in the meeting though, Aceves said they would be OK with leaving the barbed wire off of the fence.

Burgin said they could always put the barbed wire up later if needed.

Board member Bill Wagoner asked if the property would use high-intensity lighting, where the runoff will go and how neighbors will be protected from the fumes and noise coming from some of the equipment.

“(City Council) likes to know about how you will operate that site to protect those neighbors because if not, I believe property values then come into question,” he said.

Brown said the lights would be aimed towards the woods so it would not shine directly into a neighbor’s windows.

Wagoner pointed out that, according to the topography map, runoff will probably run towards the north and west, away from neighbors.

Aceves said there will not be any large-scale equipment on the property. Brown mentioned there would probably be a couple of gas pickup trucks and a diesel pickup truck.

Aceves also said the staff will be out in the field most of the time.

Burgin said one of the most important things the applicants will have to show City Council is how they will make a commercial operation look residential.