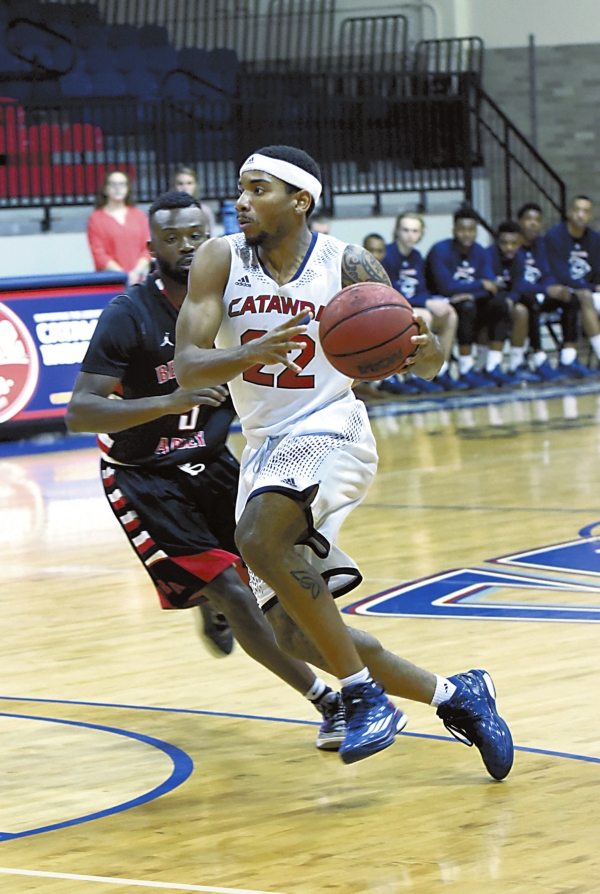 Wayne Hinshaw/for the Salisbury Post ... Catawba’s Jerrin Morrison (22), driving to the basket during an earlier game this season, scored his 1,000th point last night at Wingate.

WINGATE — Down one point with 3:35 remaining, Catawba’s men’s basketball team was in position to get a huge road win  at Wingate’s Cuddy Arena

But it didn’t happen. Wingate hammered the Indians with a 19-5 finishing kick, winning 97-82, and that meant Catawba junior Jerrin Morrison’s 1,000th career point came in a losing cause.

Catawba  welcomed talented redshirt freshman Malik Constantine back to its rotation after an injury, but the Indians still dropped behind the hot-shooting Bulldogs (8-7, 5-4 SAC) by 15 points in the second quarter.

Wingate rode the torrid hand of Mike Baez, who had 18 of his 30 points in the opening half.

Catawba (10-5, 4-5 SAC) fought back to a 41-34 deficit at halftime behind some sensational play by junior guard Jameel Taylor, and then started strong in the second half.

The teams fought back-and-forth over the next five minutes before the Bulldogs spurted to a 74-67 edge with 6:14 to go. The Indians sliced the margin to a single point twice, the last time on a dunk by Constantine  at 78-77 with 3:35 remaining.

But the Bulldogs answered that dunk with the next 11 points, a devastating run that decided the contest.

Taylor paced the Indians with 28 points. Morrison added 16 points and joined Taylor and Arrington in the 1,000-point club. Arrington and Constantine chipped in with 10 points apiece.

Baez canned 8-of-11 from the field and was a perfect 11-of-11 at the line in scoring 30 points. Anthanee Doyle made five 3-pointers and scored 18 points and Isiah Cureton had a double-double of 14 points and 10 rebounds. Zeriq Lolar scored 12 points.

Catawba shot just 37 percent from the field, but the difference was mostly at the foul line where Wingate shot 28-for-30.

Catawba travels to Lincoln Memorial on Saturday for a 4 p.m. tip.