Keion Adams: Former Salisbury star is getting ready for the next step 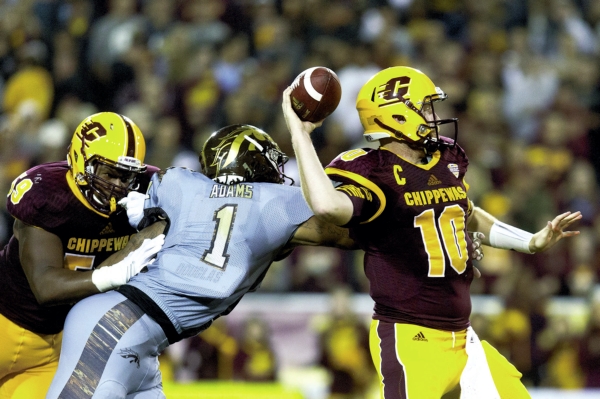 Adams, who graduated from Salisbury High in 2013,  has been working out at  Fit Speed Athletic Performance as he prepares for the next phase of his life.

“Relaxing a little bit and enjoying the weather,” Adams said. “But also putting in very tough workouts. I’m working on agility and speed.”

Adams is ranked 18th on the list of draft-eligible defensive ends by NFL Draft Scout and he’s ranked as the 24th-best outside linebacker by NFL Draft Countdown.

That tells a lot about the 6-foot-2, 245-pound Adams. Obviously there are people who believe he should  hear his name called in the later rounds of April’s NFL Draft, but opinion is sharply divided on what his best position is.

Adams is a “tweener.” He  understands the doubts that come along with that label.

“Obviously I’ll play anywhere in the NFL someone wants me to and I’ll do anything a team asks,” Adams said. “But if you told me I could pick my position, I’d pick outside linebacker in a 3-4 defense. I’m athletic enough to make plays there, but that’s something I’m going to have to prove because I’ve been a defensive end for four years.”

Adams was an impact player as an end the last two seasons.  As a senior, he piled up 18 tackles for loss to lead the Mid-American Conference and he had  7.5 sacks to pace a strong team that went unbeaten in the regular season before falling to Wisconsin, 24-16, in the Cotton Bowl.

“Keion had a great college career,” said Joe Pinyan, the current Carson coach who coached Adams when they were at Salisbury High. “But he’s going to have to find just that right fit, that right situation in the NFL.”

Size-wise Adams is a prototype NFL outside linebacker, but that position involves a different skill set than what he’s been doing in college. In high school, Pinyan used Adams all over the place — fullback, tight end, safety, linebacker, even cornerback, and he excelled everywhere. But that was high school.

“There are people who want to see if I can bulk up to 260 pounds and still maintain my speed and play defensive end in the league,” Adams said. “But most scouts want to see what I can do as a linebacker. That means covering backs and tight ends and it means tackling people in space. I believe I’ve got the quickness and the movement to do that, but I’ll have to show it.”

Adams is going to get chances to shine prior to the draft. His major showcase opportunity is going to be the NFLPA Collegiate Bowl. Everyone invited to that televised game (Fox Sports) is a prospect. Adams will be heading to California on Jan. 15 to get ready for a game that will be played on Jan. 21. It will be his first trip to L.A.

“This whole season has been a cool ride,” Adams said. “This will be one more amazing experience.”

Adams was all set to go to Ball State as a high school senior, but Ball State withdrew its offer late in the recruiting process.

“For a while, Keion didn’t have anything,” Pinyan said. “But then (Western Michigan assistant) Bill Kenney shows up and starts talking up Western Michigan.”

To Adams, Kalamazoo sounded like a fairy-tale place, a make-believe city where the Cat in the Hat hung out with The Grinch.

But he didn’t  have many options as far as playing big-time football, and so he headed 676 miles north to Kalamazoo. He quickly fell in love with it.

“The best decision of my life,” Adams said. “I needed to get away from a lot of negativity, and start fresh. Kalamazoo changed my life and not just on the football field. I grew up. I matured. I’m a different person now than when I left Salisbury.”

He didn’t get to redshirt. New head coach P.J. Fleck needed the wide-eyed freshman for depth right away. That team went 1-11, and Adams got thrown around by bigger opponents. He kept plugging.

By his sophomore year, Adams was a part-time starter. His junior year he was on the brink of stardom. As a senior, he was a standout.

“Second team All-MAC,” Adams said. “That’s an honor because I’d never made All-MAC before. But I would like to have been first team. It means people still doubt me. That adds more fuel and motivation. I’ve still got a lot to prove.”

Adams had sacks in five straight games this season. That led to more double teams. The sacks dropped off, but the tackles for loss kept coming, and he had three forced fumbles, including a game-changer against Toledo.

The biggest play he made as a senior was probably a strip-sack/forced fumble against Toledo.

“Close game and I had a feeling if we were going to stay undefeated, if we were going to keep our dreams alive, I needed to make a big play,” Adams said. “When I got a shot at the quarterback, I wasn’t going to settle for the sack. I wanted to get the ball back for our offense.”

He made that play, and it helped Western Michigan — which rose from 1-11 obscurity to 13-1 in Adams’ four years — get into the Cotton Bowl against a mammoth Wisconsin offensive line.

“We actually have a pretty big defensive line, but we looked small against guys who were 6-foot-8 and 310 pounds,” Adams said. “They ran it downhill at us a lot. It was a tough day, but I believe I held my own and played with energy. I showed I’m not just a pass-rusher. I’m someone who will stick his nose in there.”

Adams had a tackle for a loss of 5 yards in that game to cap his college career.

But now Adams moves past the fun. Showing what he can do in the practices leading up to the  NFLPA Collegiate Bowl and the game itself are his main focus. Then, in March,  he’ll have his Pro Day at Western Michigan, and he hopes to run a strong time in the 40-yard dash. He usually runs a 4.8, but a 4.7 on that day would do him a lot of good.

Adams’ teammate and close friend, Corey Davis, a receiver, is a sure first-round pick.

The fallback plan will be a college degree. Adams, a criminal justice major, is only a few hours short of a diploma.

“No one is pulling harder for Keion to make it in the NFL than I am,” Pinyan said. “But the biggest thing is he’s grown into a great person. He’s going to be successful in life no matter what happens with football.”