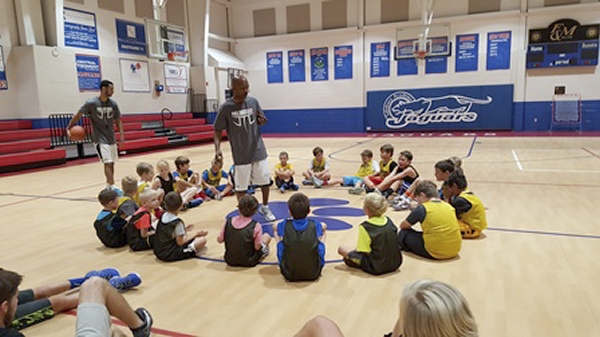 JLT Fieldhouse is named after Antwaun Thompson’s father, Sgt. Major Joe Lewis Thompson, who Antwaun says is his inspiration. ‘This organization is founded on my father’s foundation of giving more than you receive,’ says Antwaun. Pictured, Antwaun leads a leadership talk at a JLT clinic. Submitted photo.

SALISBURY — Connecting with and mentoring the younger generations has always come naturally to Antwaun Thompson. It’s simply who he is. Having witnessed years ago a lack of mentorship in today’s society, Antwaun discovered that basketball — his greatest passion — was an inspirational avenue through which he could help children better themselves.

“Yet even after 31 gratifying years of coaching basketball, I realized that I had more to give to the sport,” says Antwaun. “The bug really bit me.”

It was then that the idea of JLT Fieldhouse, a basketball program for children of all backgrounds, was born. Antwaun didn’t have a facility of his own to use, but he had experience, skill and passion. He also had the confidence of Beverly Fowler, head of school for Salisbury Academy.

“Antwaun has been a positive force of mentorship and character modeling since they day he first walked through the academy’s doors,” says Fowler. “Students light up when they see Coach Thompson.”

And so it’s no surprise that after approaching Fowler with the idea of starting JLT Fieldhouse, Antwaun quickly gained approval to use the Salisbury Academy gymnasium for camps and lessons.

“Salisbury Academy has a strong desire to be a community resource, and JLT Fieldhouse so beautifully represents our school values of teamwork and leadership,” says Fowler.

JLT Fieldhouse started out offering private lessons on Sundays for two students each week. Today, the 501(c)(3) non-profit organization is almost three years old and averages 40 to 50 kids each Sunday — a mix of boys and girls ranging from age 6 to 17.

For the 126 students currently in the program, JLT Fieldhouse offerings include private lessons and clinics, camps and an annual tournament. And the dynamic mix of athletes involved is something special, Antwaun says.

“Getting kids from different socioeconomic backgrounds in one place and showing that everybody is equal, now that is important,” says Antwaun. “My legacy would be to see no boundaries and to offer opportunities to all who want to get better.”

One such student who originally came on board to improve his own game, 18-year-old Logan Hammill, eventually became one of Antwaun’s key assistants. After starting private lessons through JLT Fieldhouse, Logan went on to work as a coach while he was a senior at Gray Stone Day School.

“It’s a wonderful sense of community that Coach Thompson has established there,” says Logan.

Today Logan is a freshman at N.C. State, majoring in history education and seeking a minor in coaching. He helps out at JLT Fieldhouse camps whenever he is home, and already sees how the leadership skills he’s gained at the camps are helping him to be successful in life.

“Every drill in camp we emphasize teamwork, leadership and responsibility, whether that’s on the court or translating to your life through helping with chores or finding your career path,” says Logan.

Today, with increasing community need and a camp schedule packed as full as the school schedule at Salisbury Academy will allow, JLT Fieldhouse stands at yet another horizon. You could even say that the bug of change has bit Antwaun yet again.

“As much as I love being in the Salisbury Academy facility and am endlessly thankful for their belief in me, I can only take so many kids due to the shared space,” says Antwaun. “It’s a good problem to have. It’s pushing me to think of ways to grow our program.”

With a strong foundation of community support from groups and individuals ranging from Mayor Karen Alexander to City Manager Lane Bailey to UNC basketball star Al Wood, Antwaun is exploring the possibility of opening his own JLT Fieldhouse facility within the next few years. The space would be for more than basketball. In additional to multiple courts, the space would also include rooms for innovation centers and tutoring.

“Antwaun is the perfect person to work with our young people,” says Wood, friend and consultant of Antwaun. “His demeanor is a perfect fit to be able to influence, teach and direct young people. This is what we need in all of our communities.”

As the most critical piece of the plans for expansion, Antwaun has a team of individuals eager to join the growing operation: Antwaun’s nephew Haden Lewis Thompson, and former players Malcolm “Bo” Meriwether and Dr. Michael Torrence.

“To be successful you have to surround yourself with good people, and these three individuals will give a loving environment that embraces learning, teaching and mentoring,” says Antwaun.

And while the facility of the future may look very different from the Salisbury Academy gymnasium, the camps, the drills and the talks will continue to offer the very same message that Antwaun delivers to his players today. It is a message of teamwork, respect for the game and leadership.

“It’s not about being flashy. It’s about staying true to who you are and connecting with the right people,” says Antwaun. “Our mission is about mentoring and doing what is best for the young people.”