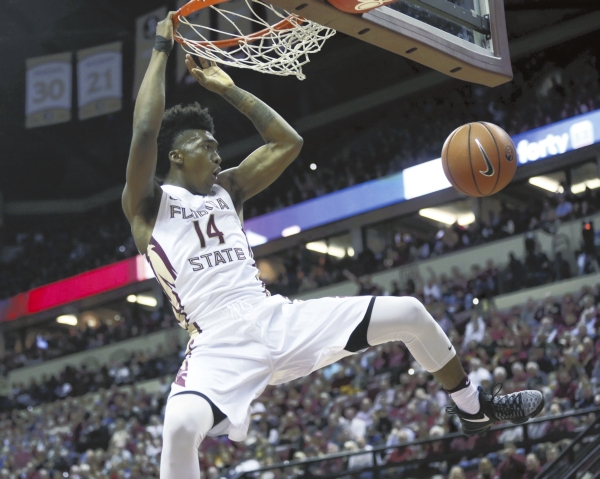 TALLAHASSEE, Fla. (AP) — Florida State celebrated its return to the top 10 with another impressive performance, wearing down Duke with its size and depth.

Xavier Rathan-Mayes scored 18 of his 21 points in the second half, helping the ninth-ranked Seminoles pull away from the No. 7 Blue Devils for an 88-72 win on Tuesday night.

Playing its first regular-season game as a top-10 team since 1993, Florida State rolled to its school-record 12th straight victory, breaking a mark that had stood since 1970. The Seminoles (16-1, 4-0) also improved to 4-0 in the Atlantic Coast Conference for the first time.

“They definitely got frustrated in the second half because they don’t have as many guys they can sub as we do,” said Dwayne Bacon, who had 13 points. “We’re gonna wear teams down all year until a team that can match our depth will be able to play with us like we have.”

Florida State’s reserves outscored their counterparts 21-4, but the biggest difference was points in the paint. With Duke’s Amile Jefferson sidelined by a bone bruise in his right foot, the Seminoles enjoyed a 56-28 scoring advantage inside.

When Duke started putting more pressure on Bacon and Terance Mann (13 points) in the second half, it created more space for Rathan-Mayes, who was 7 for 13 from the floor for the game.

“It was me taking and reading what the defense gave me,” Rathan-Mayes said. “They were trying to take Bacon out of his sweet spot and I saw a few gaps where I was able to be aggressive and knock down a few jumpers.”

The Blue Devils took a 50-48 lead on a Luke Kennard jumper before the Seminoles grabbed control with a 16-4 run over a five-minute span. All but two of the points came in the paint.

“They are a good team to keep out of the paint. They drive and ball screen you to death,” Duke interim coach Jeff Capel said. “Obviously size they can throw it up there and hurt you on the glass. They throw guys on you and wear you out.”

Duke: With Jefferson out, Matt Jones started as the Blue Devils went with three guards. Harry Giles and Chase Jeter, who need to step up in Jefferson’s place, combined for just six points.

Florida State: Midway through a run of possibly facing six straight ranked teams, the Seminoles are 3-0 with two of the wins coming against teams ranked in the top 12. The past two times an ACC team has had a similar run in the regular season — 1992-93 Maryland and 1979-80 NC State — those teams were a combined 2-10.

In his first true road game since coming back from a suspension, Duke’s Grayson Allen heard several profanity-laced chants from FSU’s student section, and there were a handful of signs about tripping opposing players. One of those incidents last season was against Rathan-Mayes, drawing a reprimand from the ACC.

Allen, who scored just nine points, suffered a blow to the head battling for a loose ball with 5:36 remaining and did not return.

“We played hard and fought,” Allen said. “They just made a run at the end when we were trying to press. They beat our press and extended the lead.”

Rathan-Mayes said the matchup was personal to him because of what happened last year.

“Ever since he did that I’ve been waiting a long time to see him again,” Rathan-Mayes said. “Allen is the head of the snake for Duke. When he goes, they go. I wanted to be able to take him out of the game early and I think I did a good job of that.”

“It was extremely motivating for our players,” Florida State coach Leonard Hamilton said. “You’d like to see this every night. This is a little bit of a dose of the same medicine when we go and play at every arena in the ACC.”

Duke: The Blue Devils have another tough road test on Saturday against No. 14 Louisville. Duke is 2-1 against the Cardinals since they joined the ACC.

Florida State: The Seminoles travel to 11th-ranked North Carolina on Saturday, a place where they have lost 10 times in their last 11 trips.