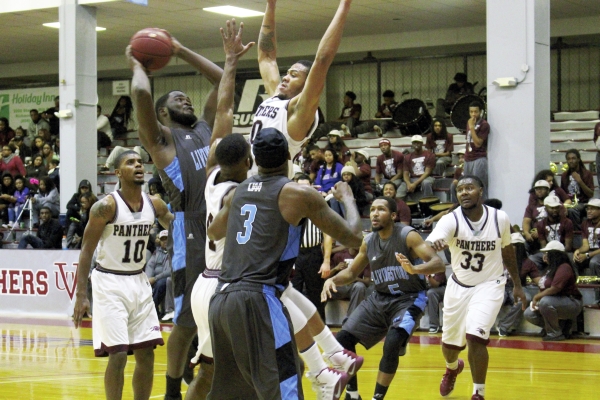 Submitted photo A Livingstone player goes up for a shot in traffic during last night’s CIAA men’s basketball game against Virginia Union in Richmond, Va. The Panthers won, 86-78.

RICHMOND, Va. — Virginia Union built a 13-point lead midway through the second half and then held on for a 86-78 CIAA men’s basketball victory on Wednesday night.

A layup and foul shot from guard Roger Ray got the Blue Bears to 78-74 with 2:05 left. After two Virginia Union free throws, a jumper from Emarri Bailey made the score 80-76 at the 1:42-mark.

Livingstone could get no closer as the Panthers made their shots down the stretch.

The Blue Bears, led by post player David Duncan, who scored half of his 24 points in the first half, led at the break, 41-40. Livingstone had played an excellent first half on the road against a team which is undefeated in the conference.

Following Duncan’s 24 points and eight rebounds was Ray and Bailey with 10 points each. Ramel Belfield had a bad shooting night and scored just five points but he did grab eight rebounds.

The Livingstone teams return to action on Saturday with a doubleheader at Shaw, beginning at 2 p.m.

Livingstone women give No. 3 Panthers a battle