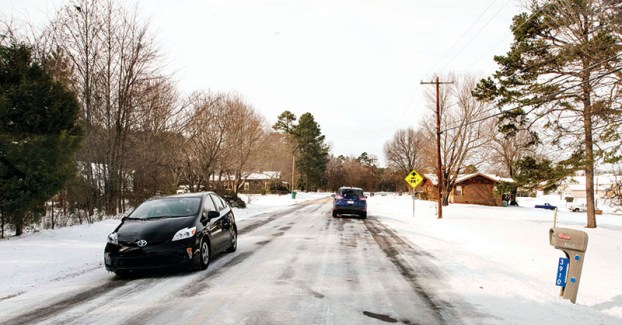 JON C. LAKEY / SALISBURY POST Long Ferry Road still has several icy spots in the shaded areas. Rowan-Salisbury Schools are closed today, due in part to the below-freezing temperatures and the residual ice that remains in the typical trouble spots in the rural parts of Rowan County. State and municipal crews have been working daily to clear the roadways of ice.

SALISBURY — On Sunday afternoon, Rowan-Salisbury Schools made an unusual decision — calling two snow days at once.

“This was a unique situation,” Superintendent Lynn Moody said.

Usually, the school system makes the decision to close schools day by day, but with several inches of snow on the ground, a buildup of ice on roads and plummeting temperatures, the district made the two-day call to keep everyone safe at home.

Rowan-Salisbury Transportation Director Tim Beck said Monday that he and his crew always “err on the side of safety” when they choose to recommend a closing or delay.

Typically, crews deploy at 3:30 to 4 a.m. to scour the county. This year, though, they got to take their time, Beck said, because the snow came over a weekend and was expected.

Moody said that Rowan County Emergency Management was “pretty confident” that back roads would not be safe for buses or teenage drivers before Wednesday morning. Beck said that the Department of Transportation was out plowing and salting roads very quickly. But when it comes to closing schools, it’s not the main thoroughfares that Beck and his crew look at — it’s the back roads.

“You’ve got roads out here in the county … that may never see a snowplow, just because they’re so rural,” he said. “A lot of people forget how rural our county really is.”

School system crews check roads such as Steele and South River Church Road in the west and River Road and High Rock Road in the east. Sometimes, they’re the last roads where snow and ice melt. But they’re still ones that buses and students will have to drive.

Beck and his crew also take the entire county into consideration. Often, he said, it may snow and ice heavily in the northwest part of the county but be dry as a bone in the southeast.

“We don’t have a crystal ball, but we try our very best,” he said.

Canceling school is a “balancing act” between making sure roads are safe and making sure that instruction time is preserved, Moody said. In a “best-case scenario,” schools have only 180 days of classes.

“So each day is important to us,” Moody said.

“We have found that that doesn’t help us very much,” she said.

The shorter delay means that it’s still dark when buses pull out to make their rounds and doesn’t allow enough time for a significant temperature increase. Over the past few years, Rowan-Salisbury Schools have leaned towards three-hour delays and closures for this reason.

While temperatures didn’t clear freezing over the weekend or on Monday, they are supposed to warm over the next few days. Beck and his crew planned to check road conditions and temperatures later Monday using precise laser thermometers to get the exact temperature of pavements and bridges.

“We expect a lot of melting to take place,” Beck said.

Moody said that the days will be accounted for using predetermined snow makeup days.