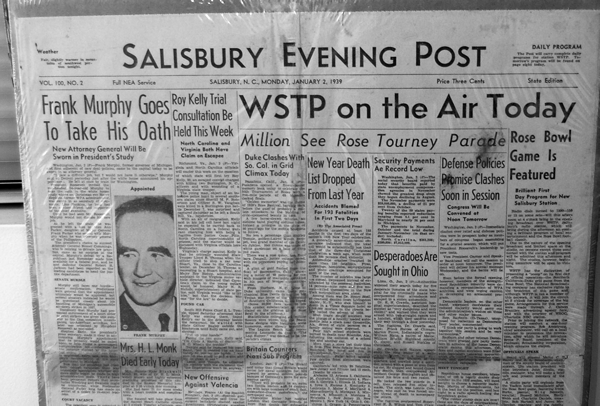 Emil Sparger of Spencer wanted us to see the front page of the Jan. 2, 1939, edition of the Salisbury Evening Post, which included a story about WSTP Radio 1490 AM hitting the airwaves for the first time. The radio station had a long, successful run for 77-plus years until it went off the air in 2016. The station’s feature presentation on its first day of programming was the 1939 Rose Bowl game between Duke University and the University of Southern California. Sparger said this newspaper was a bonus within four boxes of 1940-45 newspapers he acquired through a friend from a woman in Cooleemee. Sparger said he loves old stuff, and he knows people would be amazed at some of the prices advertised in this 1939 edition of the Post. You might notice the newspaper cost 3 cents then. ‘I thought that was pretty interesting and might be interesting to older people,’ Sparger said of the vintage front page, which he protects in plastic. ‘Some young people have no idea.’

Yesterday: When brothers were sailors