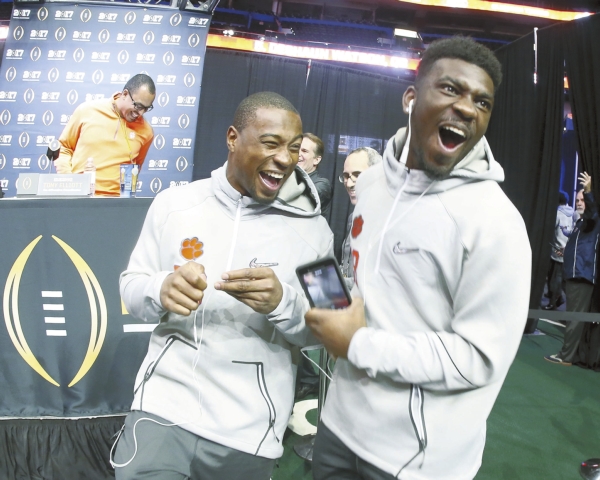 With a window closing, Clemson’s shot at a football title is now

TAMPA, Fla. (AP) — Clemson coach Dabo Swinney still has a picture from that night on his phone.

Swinney and Alabama’s Nick Saban were on the same dinner cruise in March near Boca Grande, a popular fishing spot in southwest Florida. Swinney approached Saban early in the trip and handed him a gift certificate to his favorite restaurant in the vacation destination.

On the back was a message: “See you in Tampa next year.”

Ten months later, they’re here and getting ready to play for the national championship Monday night.

Saban and the Tide are regulars on college football’s biggest stage, having advanced to five of the last eight title games. Swinney and the Tigers, who lost the finale to Alabama in Glendale, Arizona, last season, are back for another shot.

It might be their best — and maybe last — chance.

At least for awhile.

The window is closing on Swinney’s talented team. Sure, Clemson has recruited as well as anyone in the country in recent years and has all the resources and facilities to remain a yearly threat to win it all.

But there’s little doubt that this team is special and unlikely to be matched next season.

“We know this is our opportunity,” receiver Mike Williams said Saturday. “We’re losing a bunch of guys and need to get it done.”

The Tigers (13-1) are losing just about everyone.

Quarterback Deshaun Watson, who became the first player in Football Bowl Subdivision history to top 1,000 yards rushing and 4,000 yards passing in 2015, is turning pro after graduating in three years.

Running back Wayne Gallman, Williams and fellow receiver Artavis Scott will join Watson in the NFL. Gallman set the school’s single-season rushing (1,527 yards) last year. Williams is widely expected to be the first receiver draft in April. And Scott is Clemson’s all-time career leader in receptions (242).

Throw in tight end Jordan Leggett and center Jay Guillermo, and Clemson will have to replace a big chunk of its high-scoring offense.

They will have nearly as many losses on the other side of the ball, with cornerback Cordrea Tankersley, safety Jadar Johnson, linebacker Ben Boulware and defensive end Carlos Watkins all gone. That’s the team’s top two defensive backs, who have nine interceptions between them this season, its leading tackler and sacks leader.

So now’s the time to get it done.

Clemson’s lone national championship came in 1981, the year before NCAA probation hit in a recruiting scandal.

“I think we’re just now building our brand,” Boulware said. “For a long time, we haven’t been that good. We were very inconsistent. We weren’t ever really a part that have national championship conversation up until the past couple years.

“It takes a while to get the respect. It’s slowly but surely getting there.”

“Got to beat them,” Boulware said. “If you want to be the best, you got to beat the best. And that’s Alabama right now. So we’re definitely, in my opinion, at their heels. But they’re the standard, and they have been the best for a while, but we want to get up there, too.”

Clemson blew its chance last year, losing 45-40 thanks partly to two blown coverages against tight end O.J. Howard and a 95-yard kickoff return. Those three plays have haunted the Tigers for a year.

It’s also provided motivation to get back.

“We’re definitely the underdog,” Guillermo said. “It’s one thing that I feel like people love an underdog story and people love the guys who aren’t supposed to win who are able to get it done.”

Saban told Swinney that night on the cruise that he thought Clemson had a “great opportunity” to return to the title game because of all of Swinney’s returning players. Swinney is reminded of that conversation every time he scrolls through his phone and sees the picture they took wearing matching green shirts.

They might, though, need to get it done this year.