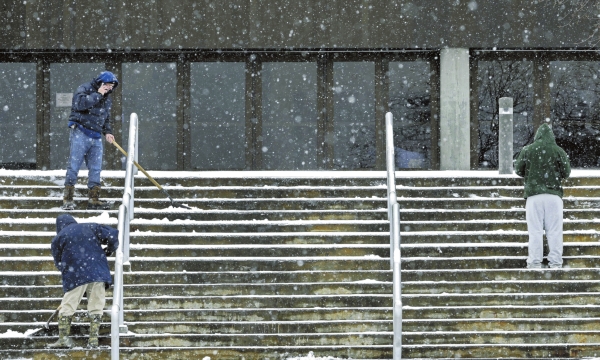 AP Photos/Gerry Broome Workers shovel snow and sleet from the stairs outside the Dean E. Smith Center in preparation for today’s game in Chapel Hill.

RALEIGH (AP) — The rivalry game between No. 14 North Carolina and North Carolina State scheduled for Saturday night in Chapel Hill was postponed a day because of winter weather and potentially dangerous road conditions.

In a news release Saturday afternoon, UNC said the game would be played at 1 p.m. Sunday. A storm brought snow, sleet and icy conditions to the area starting Friday night.

UNC athletic director Bubba Cunningham said in a statement that school officials “are not comfortable with the idea that thousands of people … would be leaving the arena tonight after 10 p.m.” Temperatures are expected to remain below freezing Sunday.

“Everyone attending the game on Sunday will still need to use extreme caution in getting to and from the game,” Cunningham said, “but we think there is a huge difference between driving in the daylight as opposed to this evening, when conditions are expected to be treacherous.”

Atlantic Coast Conference policy is for games to be played as long as teams, officials and essential support staff can make it to the venue. N.C. State had been scheduled to have an afternoon shootaround and team meal on its campus, then make the roughly 30-mile drive to Chapel Hill for the game.

“We were prepared to travel to Chapel Hill for this evening’s game, since both teams and the officials were available,” N.C. State athletic director Debbie Yow said in a statement. “While we are disappointed in the postponement, we look forward to playing tomorrow.”

The decision came despite No. 8 Duke hosting Boston College in nearby Durham despite the poor weather.

Weather postponements have been a touchy issue in the ACC, including as recently as October when Duke, UNC and N.C. State all played football games as scheduled despite heavy rain and wind from Hurricane Matthew that made the conditions arguably unplayable.

A year ago, then-Gov. Pat McCrory discouraged fans from attending N.C. State’s home game against Duke because of a winter storm and dangerous travel conditions, telling fans to “enjoy the game on TV.” But the game went on as scheduled, with both teams and officials able to make it to PNC Arena.

And in 2014, Duke was unable to make it to Chapel Hill for its game against UNC due to icy conditions following a winter storm, forcing the rivalry game to be postponed until the following week.

Newly elected Gov. Roy Cooper has declared a state of emergency for all 100 counties in the state and discouraged the public from traveling “unless you absolutely have to” due to dangerous driving conditions.

Speaking about the postponement Saturday afternoon, Cooper said: “I think that was a good move by the teams and by the ACC for safety reasons.”

Duke tops BC in first game under Capel