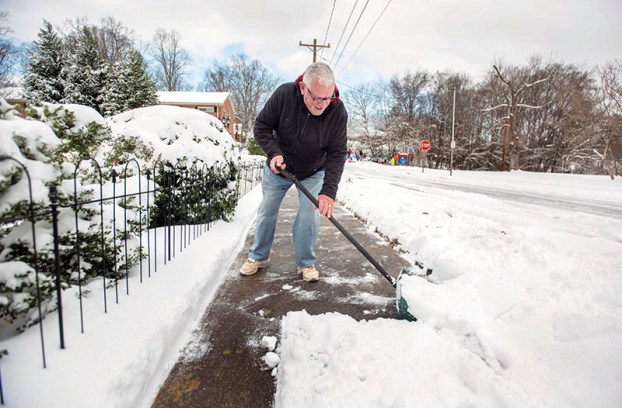 JON C. LAKEY / SALISBURY POST Joe Dufour shovels the snow off the sidewalk in front of his home on Wiley Avenue. Various amounts of snow fell across Rowan County overnight that encouraged many people outside on Saturday. Some worked and some played, while others just enjoyed the beauty of the day. Saturday, January 7, 2017, in Salisbury, N.C.

A generous snowfall blankets Rowan, but now a bitter cold sets in

SALISBURY — Joe Dufour knows something about shoveling snow. He used to live in Wisconsin.

In fact, Dufour recently went back to Wisconsin for some deer hunting, and while he was there, he bought a good snow shovel. It came in handy Saturday as he shoveled off about 6 inches of snow from his sidewalks and driveway on Wiley Avenue.

“This here is just a sprinkle to us,” said Dufour, who witnessed some real snow accumulations in Wisconsin.

Rowan County generally recorded 5 to 7 inches of snow by the time winter’s first storm had passed through Saturday. The snow quit by noon, and the sun and blue sky followed quickly, though the day’s high struggled to reach the freezing mark.

Accumulations east of Interstate 85 seemed a bit less. Snow measurements in Gold Hill, for example, were closer to 3 inches.

The city’s and county’s major arteries were clear, if a bit slushy, by mid afternoon Saturday. Many businesses chose not to open or delayed opening. Those which operated often took the time to clear their parking lots of snow first.

Fire and police departments in both Rowan and Cabarrus counties reported lower-than-normal volumes of calls and few accidents.

Frank Thomason, chief of Emergency Services for Rowan County, cautioned that travel would remain hazardous through the weekend, and people should only travel if necessary.

“Some traffic accidents have occurred across the county with local public safety handling those and also checking on numerous stranded or abandoned vehicles, with no significant injuries,” Thomason said.

Many of the Saturday’s athletic events and activities were canceled before the storm hit.

People greeted the first snow in many different, but time-honored ways. Kids went sledding or dove into the deep carpet of snow to make snow angels.

Many people rode their four-wheelers up and down slippery roads. It was a great day to take dogs for a walk and allow them to explore the vast whiteness.

Dufour enjoyed the sound of the large number of kids sledding down Centennial Park’s steep hill in Fulton Heights.

“I love it — I love to watch,” DuFour said. “Kids are happy when they get this.”

But Dufour had to keep shoveling.

“It was a perfect sledding day,” said Laury Gobble, who spent the morning at Centennial Park with her husband, Riley, and their children Jake and Josh.

“It goes fast,” Grace said of the hill, which falls quickly away toward the main part of the neighborhood park, “and everybody knows each other.”

While sleds, coasters and snowboards were the main modes of travel, Margo May Pryor, 4, decided to just roll down the hill on her own, giggling all the way.

The hill got better as the day went on.

Allison Wilson watched her children, Molly and Graham, speeding down the hill for a good part of the morning. Molly Wilson was expertly guiding a snowboard with a long handle.

“This is a good little spot,” Allison said.

The toughest part for all the kids was knowing they had to trudge back up the hill once they reached the bottom.

As people ventured outside Saturday, other common sounds were connected to the brushing, sweeping, blowing and scraping off of snow from cars and porches.

Ashley Ferguson took a long walk in the Hurley Park and City Park areas with her two dogs, Grady and Biscuit.

Down in Gold Hill, Lawrence Johnson was slipping and sliding his Honda four-wheeler through the old mining district.

“It has turned to slush now,” Johnson complained of the roads. “Too much traffic, and the state did a pretty good job brining.”

Bill Key, a maintenance engineer with the N.C. Department of Transportation in Rowan County, said crews concentrated on Interstate 85, primary roads and major secondary roads through the night.

“Our primaries are in pretty good shape,” Key said, as long as motorists used caution and drove sensibly.

After a lull in the snowfall early Friday evening, the storm settled in about 9 p.m. and continued on through the night. Crews from the DOT and city of Salisbury worked non-stop into the morning and kept going Saturday afternoon as the sun came out.

The attack plan on major roads included combinations of plowing, salt/brine and sand. Key described the snowfall as a “wet snow” that was good for plowing.

The DOT concentrates a lot of its early efforts toward achieving bare pavement on the primary roads, and that was accomplished in many areas Saturday.

In Rowan County, the DOT had 24 trucks on the road, along with six contract trucks and nine contract motor graders.

Key, who had not slept since 7 a.m. Friday, said Saturday most of his crew members also have been working on around-the-clock shifts. He expected to have emergency crews available Saturday night to catch any trouble spots before the full force went back to road clearing Sunday, which is forecast to be sunny but cold.

Once the temperature drops too low, Key said, it’s difficult for plows to have any success in scraping roads.

Powers said his crews divide into seven different sections of Salisbury, including all neighborhoods. One of those teams concentrates on emergency routes.

“We’ve got everything we’ve got on them,” Powers said.

Powers expected to check back with his men Saturday afternoon to reassess things and determine how to proceed into the night and Sunday. Again, with the expected falling temperatures, making much headway on the streets Saturday night was difficult.

“If it’s just ice, that changes up our approach a bit,” Powers said.

Steve Monday, a local weather forecaster who constantly updates his Rowan County Weather website and Facebook page, acknowledged Rowan County saw the 5 to 7 inches of snow accumulation that he and other forecasters were predicting.

“It’s been right in that target area,” Monday said.

At 7 a.m. Saturday, Fire Station 3 in Salisbury, which is an official National Weather Service weather station, reported 4.8 inches of snow, which was similar to 5 inches of snow reported by Susan Waller near Catawba College.

But those reports came before the additional snowfall throughout the morning. Waller later said she measured 7.5 inches at noon.

Monday switched his focus after Saturday morning to the frigid temperatures coming into the region. Lows of 9 Saturday night and 6 Sunday night were in the forecasts.

“That’s probably going to go lower because of all this snow on the ground,” Monday said.

Monday said he took “catnaps here and there” Friday night and Saturday morning while tracking the winter’s first snow.

SALISBURY — Snow continued to fall in Salisbury and Rowan County this morning, as road crews worked steadily in trying to keep... read more