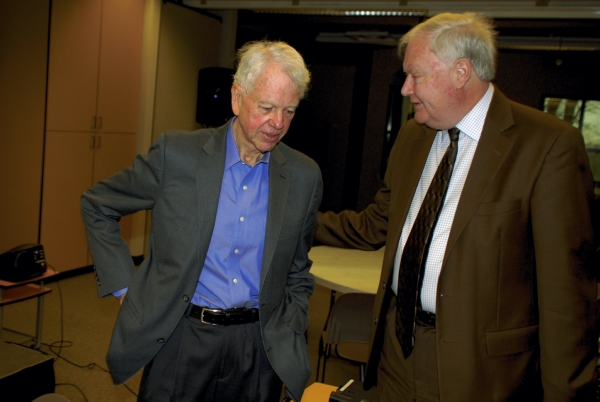 As keynote speaker for the second annual First Pitch Dinner set for Jan. 14, Catawba is bringing in Bob Ryan, one of the country’s most recognizable sportswriters and still one of the best at his craft, even in semi-retirement.

This is like sending Mickey Mantle to the plate after Roger Maris. Or to put it in  modern terms, and since Ryan is a hardcore Boston sports guy, it’s like sending Dustin Pedroia to the dish to follow Mookie Betts.

Ryan has been a regular visitor to Salisbury since he first came to town to receive a national award in 1997. As a four-time national sportswriter of the year, he returned often, and he’s developed a friendly relationship with the city and Catawba College. His role as chairman of the National Sports Media Association — that’ s the organization founded in 1959 as the National Sportscasters and Sportswriters Association —  has meant more interaction with Salisbury in recent years,

“Salisbury and Catawba have been hospitable,” Ryan said. “Speaking at this First Pitch Dinner is a natural evolution for me.”

Ryan said he’s shaken hands with Catawba baseball coach Jim  Gantt, a fervent New York Yankees supporter, but he doesn’t know him well yet. No doubt, they’ll put aside their rooting differences and get a long for one night. Both are lovers of baseball, and this is for a good cause.

The First Pitch Dinner will take place in the Gordon A. Kirkland Lobby  in the Abernathy Physical Education Center on the Catawba campus.  Catawba had hoped to have former slugger Darryl Strawberry as a special guest, but Strawberry had a scheduling conflict. Now the special guest will be George McGovern, chaplain for the Yankees and the NFL’s New York Giants.

Cost for the dinner is $75 with proceeds going to support Catawba’s baseball program.  For more information or to purchase a ticket,  call 704-637-4394 or visit www.catawba.edu/first pitch. Cocktail hour is from 5-6 p.m., with dinner and speaker from 6-8 p.m.

Among other events, Ryan has covered  20 NBA finals, 20 Final Fours, nine World Series, five Super Bowls and seven Olympics, so he can discuss almost any topic with first-hand experience.

Growing up in Trenton, N.J., Ryan’s first involvement with sports came as a 5-year-old scorekeeper in a local basketball league.

As far as his playing days, basketball  was Ryan’s forte, but his passion for baseball dates back to his pre-school days.

His education and history degree came from  Boston College. His fantasy job was to work at the Boston Globe, and that wish materialized . He was hired as a sports intern in the summer of 1968. The tale’s been told before, but it’s worth repeating that the first person he met at the Globe was recent North Carolina graduate Peter Gammons, who would become an equally iconic figure in sports journalism. Gammons and Ryan were sports fans first, but they were sports fans who could really write.

As a rookie, Ryan became the Globe’s beat writer for the Boston Celtics, a job that would’ve been his second pick of all the occupations available in the world. His first pick would’ve ben Red Sox beat writer.

The Bill Russell-led Celtics  (with lots of assistance from John Havlicek) won 11  championships in 13 years in a run that ripped through the decade of the 1960s, but they were sometimes third-class citizens in a region that worshiped the Red Sox, no matter how much they struggled at Fenway Park, and revered hockey’s Boston Bruins.

Pounding away at his typewriter to produce some of the best on-deadline game stories ever written, Ryan’s forceful word-smithing had something to do with Boston embracing the Celtics when they began tacking on additional championships in the 1970s with teams energized by Dave Cowens.

By the time Larry Bird, Robert Parrish and Kevin McHale arrived in the 1980s to fuel three more Boston NBA titles, Ryan was regarded as a basketball guru nationally. Fans figured he knew at least as much — probably more — than the guys actually coaching the teams.

Ryan still regards two teams from that golden era — the 1985-86 Celtics who  had Bill Walton coming off the bench to back up Parrish and McHale, and the 1986-87 “Showtime” L.A. Lakers, with Magic Johnson, Kareem Abdul-Jabbar and James Worthy —  as the greatest teams ever assembled.

Ryan’s profile rose considerably when the “Sports Reporters” debuted on ESPN in the late 1980s, and  Ryan’s appearances on “Pardon the Interruption” and “Around the Horn” as the years rolled by made his face familiar to America’s sports fans.

Ryan was only the Red Sox beat writer for one season for the Globe, a year in which Gammons was  working at Sports Illustrated.  That was 1977, when the Red Sox had a homer-launching team led by young sluggers Jim Rice and Fred Lynn. Those Sox also got sensational seasons from veterans Carl Yastrzemski and George Scott and bottom-of-the-order masher Butch Hobson.

In the summer of ’77, Ryan saw a lot of baseball. He witnessed 132 Red Sox games in person, including the one in which they walloped four homers off the Yankees’ Catfish Hunter in the first inning. Ryan still remembers Catfish, head held high, walking off the mound when he was relieved with just two-thirds of an inning logged in Ryan’s scorebook.

Ryan was sideswiped by a Bloodmobile while driving to  his first day of work in 1968, but he managed to stay healthy and put in 44 years at the Globe.

Married to his wife, Elaine, since 1969, he officially retired from deadline-racing newspaper duties in 2012,  after filing his gold-medal basketball game story from the Olympic Games in London.

But he hasn’t strayed far from diamonds, stadiums, arenas and gymnasiums. He’ll turn 70 next month, but he still produces columns for the Globe.  He’s knocked out  a library shelf full of books, still writes regularly for Basketball Times and  still makes TV appearances.

“I do stay busy,” Ryan said.  “This isn’t retirement. This is just Transition to Phase Two.”

While he began his sportswriting days, thumping keys on a typewriter and dispatching his stories to the Globe via Western Union, Ryan remains relevant even as technology advances in ways  unimaginable in 1968. Ryan blogs and tweets, and his Twitter followers number more than  93,000. When Ryan weighs in on a hot topic, such as the Grayson Allen soap opera at Duke, people care about his opinion.

“A competitive, entertaining, fast-paced game,” Ryan said. “College sports are not just about the Big Picture.”

Since he’s going to be in Salisbury for the First Pitch Dinner, Ryan has made plans to travel 18 miles east to watch a Pfeiffer home game at Merner Gym. He’s intrigued that the Falcons are putting up points so rapidly— they pace Division II  with 105.8 points per game —  and he relishes watching fast-break basketball done right.

On Jan. 14, Ryan will get a chance to speak on behalf of a Division II  baseball team that’s been  doing it right for a long time. Catawba has won at least 30 games 17 straight seasons. Gantt has a record of 717-367.

Catawba’s baseball season is scheduled to open on Feb. 1 at Pfeiffer.