Snow, frigid temps look to be heading our way 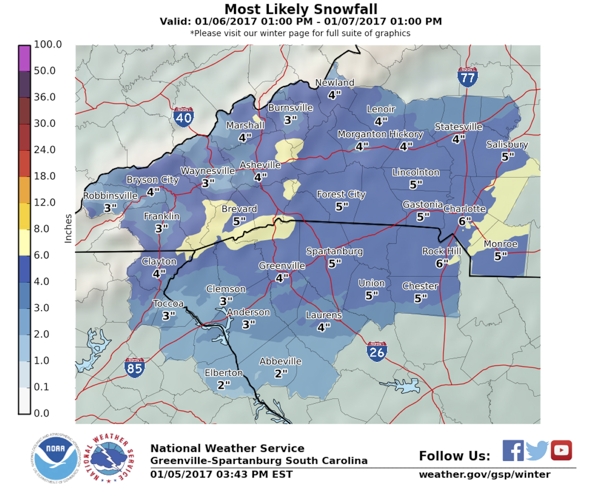 SALISBURY — Forecasters say Rowan County likely will see an accumulation of snow Friday night and into Saturday morning, possibly up to 6 inches.

But the bigger concern could be just staying warm over the weekend. The low Saturday night is expected to be 15 degrees, and it could drop to as low as 9 degrees Sunday night.

Salisbury resident Ruth Harper said she is especially concerned for dogs who are kept outside not having an adequately warm doghouse or any protection against the cold. The smaller the dog, the more he is in danger with the kind of temperatures forecast, Harper said.

She made a personal plea to dog owners — or their neighbors — to make sure dogs are brought inside or have adequately warm accommodations outside.

The National Weather Service office in Greenville-Spartanburg, S.C., issued a winter storm warning Thursday afternoon that said snow accumulations in this section of the Piedmont could be 4 to 6 inches Friday and Saturday. That’s a shift from an earlier winter storm watch saying that 3 to 5 inches were possible.

As of 7:30 p.m. Thursday, Rowan County Weather was forecasting 2 to 4 inches for the county.

As always, the dangers with heavy snow are slick roads and possible power outages, which are an even bigger concern with the frigid temperatures expected Saturday and Sunday nights. Saturday’s high is expected to be 32 degrees with a low of 15. Sunday will be sunny, the Weather Service said, but the daytime high will be 32 and the overnight low possibly down to 9 degrees.

The high Monday is supposed to be 34 degrees.

Bill Key, a maintenance engineer with the DOT, said state crews have put salt brine on the surfaces of all primary routes in the county. In addition, all the DOT’s snow equipment is loaded and ready.

DOT crews are expecting to be busy Friday night and Saturday.

“We’re going to be here with bells on,” Key said.

Craig Powers, assistant public services director for Salisbury, said city departments, including Fire, Police and Public Services, had a preparation meeting Thursday morning. City equipment will be fitted with plows and sanders, and crews could be pre-treating some areas Friday and be ready later in the night with plows, sand and salt in case the storm comes as predicted.

Powers had seen a wide range of predictions Thursday on possible accumulations.

Likewise in Kannapolis, crews hooked up snowplows to trucks and loaded salt spreaders. Brining on the streets began Thursday morning.

Both Salisbury and Kannapolis concentrate their efforts on prepping and maintaining all major streets — especially those that lead to public facilities, such as hospitals, urgent care centers, fire departments, the police department and schools.

“These are heavy and difficult pieces of equipment to operate safely,” Public Works Director Wilmer Melton said. “A plow adds nearly 8 feet to the front length of a truck.

“Motorists should be careful and give our crews plenty of room to work safely. We encourage citizens to stay home. With the prediction, of not only snow but ice, the safest option is for everyone to stay off the streets.”

In anticipation of bad weather coming in Friday night, Carson and North Rowan high schools in Rowan County moved their basketball games to Thursday night. North Rowan played at Lexington, and Carson was at home against Cox Mill.

While the storm is not expected to cause widespread power outages, emergency management officials in the state gave these winter safety tips:

• Keep alternative heating sources prepared. If you have a fireplace, store a good supply of dry, seasoned wood.

• Keep fire extinguishers on hand, and make sure your family knows how to use them.

• Do not use charcoal grills or generators indoors; the fumes can be deadly.

• Turn off electrical appliances that were on when the power went off to avoid a power surge when the electricity is restored.

• Use flashlights. Do not use candles; they greatly increase the chance of having a fire in your home.

• Limit your activities to no more than two rooms and close off unneeded rooms.

• Stuff towels or rags in cracks under doors and cover windows at night to keep cold air out and warm air in.

• If you have well water, fill tubs and buckets with water so if the power goes out you still have water.

• Remember to eat and drink regularly. Food provides the body with energy to produce its own heat.

• Keep your body replenished with fluids to prevent dehydration.