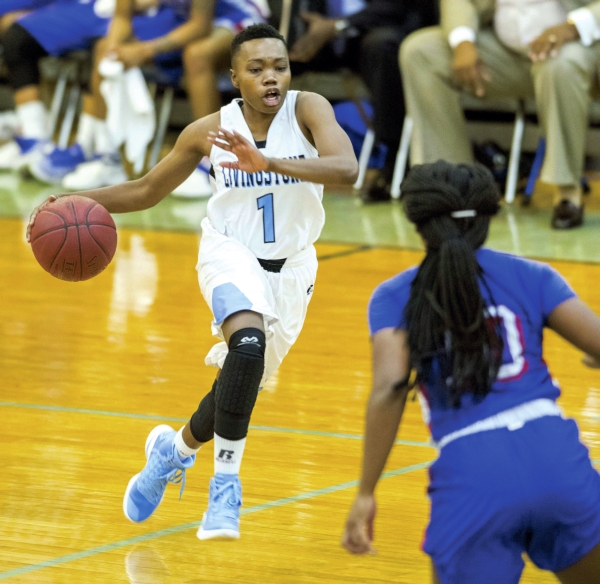 SALISBURY — Livingstone raced out to a 21-8 lead in the first quarter and went on to defeat Elizabeth City State, 88-49, in women’s college basketball action here at New Trent Gym Thursday night.

The Blue Bears (6-7, 1-2 CIAA) made nine of their first 18 shots and also went 3-of-9 from the 3-point line in the first period and never looked back. Guard Zena Lovette scored nine of her 24 points in that initial frame and Bria Patterson added seven points.

Livingstone started the new year with just eight players and with sub Zenetria Redfern out sick, there were just seven dressed last night.

Another big story continues to be junior guard Deonna Young. The sharpshooter, who red-shirted last season, has scored 76 points in the last three games. Last night, Young led Livingstone with 30 points, blistering the nets from downtown (8-for-14 on 3-point shots).

“I was feeling ‘it’ tonight, and felt strong energy from my teammates,” said Young, from Winston-Salem, who acknowledged that she’s alway been a “shooter.” “I’m just happy to have this opportunity. I’m not looking at it that we have seven players and ‘I’m going to play.’ It’s just that whoever’s on the court, we’re going to bring it. We all want the same thing — we want to win.

“And we really wanted the win tonight,” continued Young. “To be 3-0, coming back from the break, it feels great.”

Silver is pleased that the remaining players seem to have secured a strong bond.

“Sometimes you get addition by subtraction,” said Silver, in her first year as head coach at Livingstone. “I think that’s where we are as a unit. It feels good, feels better, coming to the gym and seeing the smiles and energy that we have now. It has definitely has translated into what we’ve seen these past three games.”

And while there is a rotation of the two-to-three bench players, Silver is not concerned about the team eventually hitting a wall.

“Walls are man-made, and that’s why we have ladders,” added Silver. “We’ll climb up and climb over, if we get to that point, but we’re not going to put that into the universe. We don’t need that kind of energy, because we’re in a good place.

“There are a lot of teams with long benches and short rotations,” continued Silver. “We just have a short bench and short rotation and we’ll get the same result. We had good momentum coming into tonight and had a chip on our shoulder about CIAA games because we felt like we had two earlier conference losses that should have been wins.”

Like Young, super quick Lovette had a big game with 24 points, 12 rebounds and six assists — and just two turnovers. Patterson scored 10 points and the cakewalk allowed an off-shooting night from senior guard Brittany Taylor (2-of-10) to be a non-factor.

The Blue Bears led at halftime, 40-16, and extended the lead in the third quarter to 58-30 and then really poured it on, outscoring the Vikings in the final period, 30-19. The lead reached 41 points on a jumper from Asia Green before ECSU scored the final basket of the game.