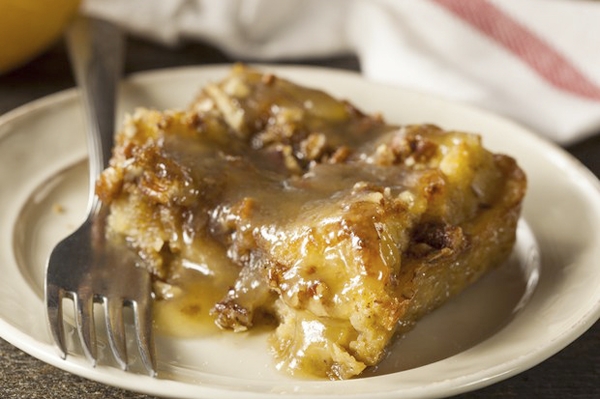 Now that you have plenty of milk and bread, what are you going to do with it?

French toast is one easy option, with many variations.

I’m having visions of my grandmother’s bread pudding. Sadly, I never got her recipe. But what I remember is luxurious, custardy pudding, the bread becoming one with the sweet, soft custard. There were a few brown bits on top, but mostly it was a warm bath of bread, milk (or cream) and sugar. Cinnamon and nutmeg were a must, and my memory includes a buttery, silky whiskey sauce on top.

I’ve looked at a number of recipes, and none sounds exactly like what she did, but a couple come close.

They key is to let the bread soak in the custard, even begin to break down a little, before cooking.

Combine milk, cream and butter in a pot and simmer gently until butter melts. Mix together eggs, sugar, vanilla, salt, cinnamon and nutmeg. When milk mixture has cooled slightly, add the egg mixture. Place cubed bread in a buttered baking dish, 13-by-9 or slightly smaller. Pour warm custard over the bread and allow to soak for at least two hours or overnight.

Preheat oven to 350 degrees. Add raisins to soaked bread mixture and bake for 45-50 minutes, or until set.

Coffee or hot tea is wonderful with this and you’ll feel warm all over.

Snow, frigid temps look to be heading our way