Column: Amid abuses, college sports sometimes gets it right 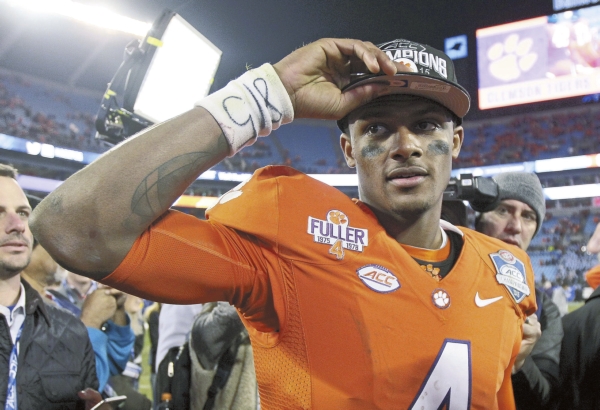 We’re not talking about anything he’s done on the football field.

The Clemson quarterback may be going for a national championship Monday night, but he’s already scored one of the biggest victories of his life.

In just three years, Watson became the first member of his family to graduate from a four-year college. He walked across the stage a couple of weeks ago, wearing a cap and tassel rather than a helmet, to claim his degree in communications.

“No one can take that away from me,” Watson said. “I put the time and the work in, and knowledge is something you can’t take away from a person.”

For all the well-documented abuses in college athletics, from players getting someone else to do their schoolwork to the massive academic fraud carried out by North Carolina, there are plenty of guys who do things the right way.

Many of them will be on the field in Tampa, suiting up for both teams.

They’re all deserving of a shout-out.

Jonathan Allen , Alabama’s star defensive lineman, returned to college for his senior season — time spent not only boosting his stock in the upcoming NFL draft but earning his diploma in financial planning.

Even if Allen goes on to have a long, successful career in the pros, he figures that having a degree will come in handy when he’s done.

“There’s no telling what I’ll want to do after my football career,” he said. “Just having that degree opens up way more doors.”

That’s a message that Alabama coach Nick Saban preaches to all his players.

“We tell guys when they come here, ‘You’re in the business of developing two careers, one off the field by graduating from school, and one on the field if you can become a good enough player to have an opportunity to play at the next level,’” Saban said

Even at a powerhouse school such as Alabama, which is going for its fifth national title in eight years and sent countless players to the NFL, there are no guarantees of future riches on the gridiron.

“The key thing is the importance of education, the importance of developing a career off the field,” the coach said. “If you’re a great football player, which may be 1 percent of all college football players, you may play football for five, six, seven, eight years, probably no more, which means you’re 30 years old and then your career is over. What do you do for the next 50 years of your life?”

The last two teams standing in college football both scored well on the most recent Academic Progress Rate (APR) released by the NCAA. Clemson ranked third in the ACC, trailing only Duke and Georgia Tech, while Alabama tied with Florida for the third spot in the SEC behind Vanderbilt and Auburn.

Of course, there’s no denying that plenty of athletes — especially in big-time football and basketball programs that are really nothing more than farm systems for the pros — have no concern about actually learning anything while in college.

Often, they are directed into so-called clusters — courses of study populated with star athletes, many of them largely intent on making academics as easy as possible so they can stay academically eligible just long enough to get started on their NFL or NBA careers.

But Watson’s mother Deann, who battled cancer while raising Deshaun and his siblings on her own, had no intention of letting her son go down that path.

She stressed all along that he was at Clemson to not only play football, but to get his degree.

Watson took her prodding to heart, graduating a year ahead of schedule so he’d already have his diploma in hand before he headed off to the NFL after his junior season.

“It’s amazing how he accomplished all this stuff,” said Sonia Watson, who is Deshaun’s aunt. “Not too many people could do that.”

Watson graduated early from high school so he could enroll at Clemson in January 2014. He took on a massive workload during the 2015-16 school year, completing 37 academic hours so he would have a light class load for his last semester in college.

The entire family was on hand to celebrate when he got his degree.

Watson’s influence wore off on his teammates. His top receiver, Artavis Scott, also graduated in three years with a communications degree.

Clemson coach Dabo Swinney said Scott wasn’t “very committed to being a great student coming of high school,” but he began to realize the value of an education while rooming with Watson.

“It’s just been awesome to watch (Scott) transform his life here and really value and be as hungry to be great academically as he’s been athletically,” Swinney said. “Those two just took off together.”

College athletics has a lot of problems.

But sometimes they get it right.