The Smoke Pit hopes to open by Jan. 14 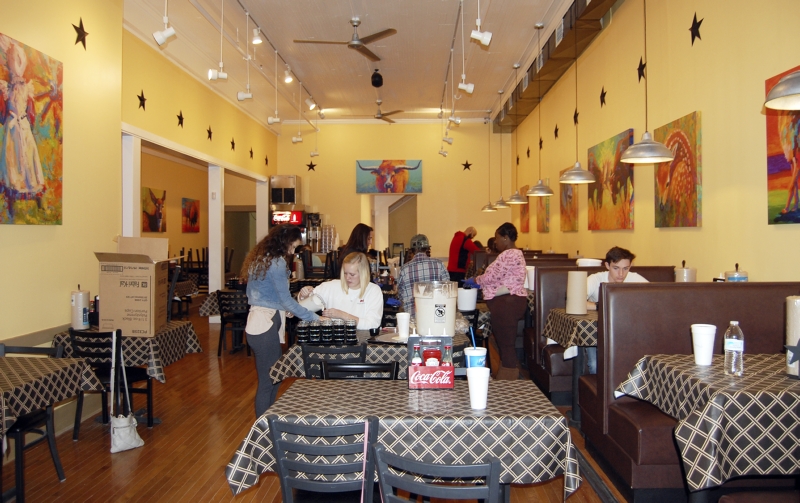 Amanda Raymond/Salisbury Post Employees of The Smoke Pit, on East Innes Street, are hard at work preparing for the highly anticipated opening. Owners hope to hold the grand opening by Jan. 14.

SALISBURY – The process that started about a year ago hit some snags along the way, but it looks like The Smoke Pit may finally open this month.

Business partners Devin Barbee, Joey Graham and Jeremy Beaver originally wanted to lease the space at 115 E. Innes St., which used to house Romo’s Pizzeria and Restaurant. Barbee said they expected to do a little renovating and be open in a few months, but with the popularity of the location in Concord, they realized they need more space for seating.

The Texas-style barbecue restaurant won the Golden Helmet Restaurant of the Year award from the Cabarrus County Convention and Visitors Bureau in 2015. It also is ranked No. 1 out of more than 200 restaurants in Concord on TripAdvisor.

Its customer base has gone from 30 people a day to 700 a day since the restaurant opened in 2014, according to its website.

Expecting the same reception in Salisbury, the partners decided to rent the space next door to add more seating. The new space, which gave the restaurant about 60 more seats, had to be outfitted to meet building and fire codes.

Certain steps required permits, architect drawings and approval from the city. In addition to a fire system, the partners had to install an exhaust system and Southern Pride Smokers, disabled-accessible restrooms, offices and a ramp because the floor in one space was higher than the other.

“We wanted to be open six months ago,” Barbee said.

Many in Salisbury have been eagerly awaiting the opening of the restaurant, and it seems like it may have been worth the wait.

The spaces have a rustic, country feel, with colorful paintings of animals and Texas-style stars on yellow walls. Part of the space has brick walls and cedar accents.

“You have to give a person a good feel when they walk in,” Barbee said.

Unlike the Concord location, the Salisbury Smoke Pit will be a full-service restaurant. It has a new drink station and, although there is a bar, Barbee said the restaurant will be family-friendly.

Barbee said he wanted to wow customers with the decor first and then the food.

The restaurant’s best item may be its brisket, Barbee said. The meat is smoked for up to 16 hours. Diners also love the ribs, jumbo chicken wings, collard greens, and macaroni and cheese, he said.

And the restaurant does not skimp on the food. Barbee said most customers leave with a to-go box.

Barbee, who also owns the Stock Market, a meat market next to the Smoke Pit in Concord, said he did not plan on opening a location in Salisbury. Michael Young, owner of the building, approached him about the available space, and things just fell into place.

Barbee said The Smoke Pit is not trying to take away from other barbecue restaurants in town but instead add to the city’s growing landscape of dining choices.

Construction is in its final stages, and employees are being trained. The restaurant added 45 new jobs to the area.

Barbee said he hopes to have a soft opening soon and a grand opening by Jan. 14.

“We definitely want to be a big part of Salisbury,” he said.

To contact The Smoke Pit in Salisbury, call 704-754-8336. The restaurant also offers to-go orders and catering.