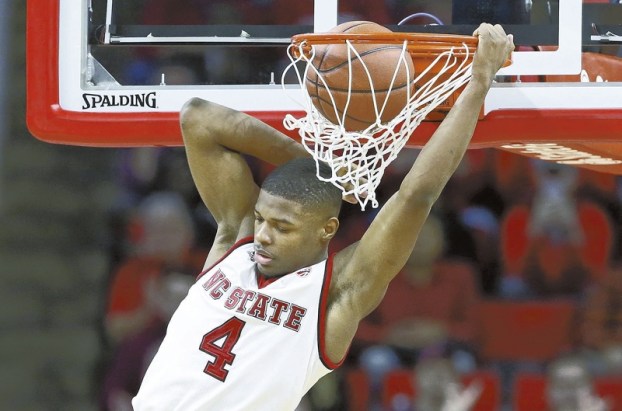 RALEIGH (AP) — Freshman guard Dennis Smith Jr. had 27 points, 11 assists and 11 rebounds for the second triple-double in program history, and North Carolina State rode a dominant first-half performance to a 104-78 victory over No. 21 Virginia Tech on Wednesday night.

Ahmed Hill scored 17 points for Virginia Tech (12-2, 1-1), which was coming off a home win against then-No. 5 Duke that pushed the Hokies into the AP Top 25 for the first time since November 2010. But just about everything went wrong Wednesday, down to 6-foot-10 freshman starter Khadim Sy sitting out after rolling an ankle during the afternoon shootaround.

Virginia Tech: Perhaps the most alarming part of the first half was the Hokies’ defensive struggles. Too often N.C. State players got to the rim and encountered no last-line defense, at times threatening to turn this into a dunking display for a thrilled home crowd. In one play that illustrated those troubles, Wolfpack center BeeJay Anya (6-foot-9, 320 pounds) had time to back a defender down from near the elbow to deep in the paint for a hook shot with nary a rotation from a help defender.

N.C. STATE: The Wolfpack’s young roster got a rough introduction to league play in a weekend loss at Miami, but this was a reminder of what that potential-filled group can do when it’s on. In addition to Smith’s triple-double, Terry Henderson (17 of his 22 points before halftime) got loose early and Abdul-Malik Abu added 20 points and 11 rebounds.

Virginia Tech: The Hokies visit No. 12 Florida State on Saturday.

N.C. State: The Wolfpack visit No. 14 North Carolina on Saturday in the next meeting between the longtime rivals.