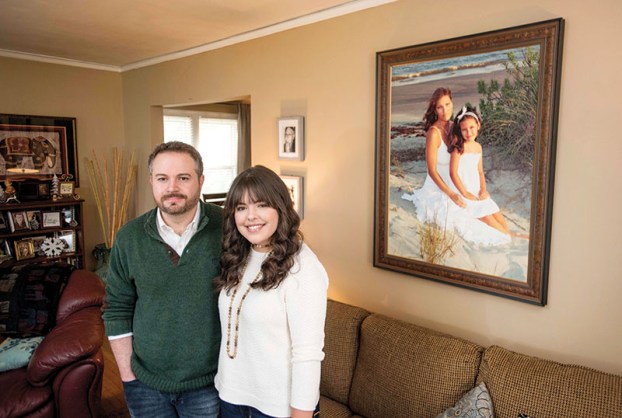 JON C. LAKEY / SALISBURY POST Tyler Kent and his step-daughter Isabella Alvarez pose in the living room of their Salisbury home. Kent’s wife and Alvarez’s mother, Chanty Freeman Kent, passed away after falling into a diabetic coma on Nov. 1, 2014. Alvarez, a Salisbury High senior, has decided to pursue a medical career, in part due to watching her mother suffer from her medical problems. A large portrait of Chanty and Isabella taken in Charleston, S.C., hangs on the wall.

SALISBURY — Isabella Alvarez said she always hated hospitals. Growing up, her mother was often in and out of them dealing with Type I diabetes. For Isabella, they carry bad memories.

But when mother Chanty passed away in November 2014 after falling into a diabetic coma, Isabella started thinking about becoming a doctor.

‘It would be an honor to help people like my mom get home to their families,” she said.

Now a senior at Salisbury High, Isabella, 18, is motivated to succeed and is working hard towards a future she can be proud of. And for her, the key to that is a good education.

Life wasn’t easy growing up. Isabella’s mother struggled to hold down a job while dealing with diabetes, and the two spent a number of years dependent on food stamps and disability. But Isabella said she always saw education as a way out.

The two moved to Salisbury from Charleston, S.C. when Isabella was still in elementary school. Isabella said they moved to be closer to family.

“Just because I think she needed help, in part, raising me,” she said.

They stayed in a property owned by Isabella’s grandmother. The same grandmother also paid for Isabella to attend Salisbury Academy from fourth- to eighth-grade. Coming from a public school system, the rigorous classes were an adjustment, and Isabella remembers she had to do a lot of extra work to catch up — it didn’t take long.

“Soon, I was comfortable. I was in my element. I was making all A’s,” she said.

In the meantime, she and her mother weathered what life threw at them — from medical complications to being out of work. Through it all, though, Isabella remembers that her mother was warm, supportive and her best friend.

“She was the mom that you wanted,” she said.

While the two never went hungry, life wasn’t easy either. Isabella said attending a school like Salisbury Academy sometimes made her struggles stand out in sharp relief.

“People were going to like, the Bahamas for the weekend and I couldn’t afford to take swimming lessons at the YMCA,” she said.

For a while, it was just the two of them. But in 2010, Isabella’s mom married Tyler Kent. Kent knew Chanty from high school, and said he had a crush on her, even then. He said she had a presence — outgoing, storytelling and entertaining. Everyone was in love with Chanty, he said.

Though Kent admitted he was nervous about becoming father to a 10-year old, he and Isabella hit it off quickly.

And Kent couldn’t be prouder of her.

Kent describes Isabella as smart, warm, compassionate, community-minded and someone who has a strong work ethic. In a Dec. 17 Facebook post honoring Isabella’s 18th birthday, Kent recalls the first time he met Isabella, and said she was a “a funny, beautiful, shy little girl, whose nose was always buried in a book.”

The two leaned on each other as Chanty’s health deteriorated. And Isabella threw herself into her schoolwork.

“That does put a toll on you,” she said of her mother’s illness. “It’s hard to focus on things sometimes. But, in a way, my schoolwork was also an escape from all of that.”

She took AP courses, joined clubs and became a member of the National Honor Society.

In November of 2014, Isabella’s sophomore year of high school, the worst happened. Chanty was what doctors called a “brittle diabetic,” meaning her sugar levels could plummet or skyrocket at random. On Nov. 1, 2014, she went into cardiac arrest, and then a diabetic coma that left her brain dead. She passed away on Nov. 3 — it was a month before Isabella’s 16th birthday.

Always good at compartmentalizing, Isabella kept up with her schoolwork, but said she resigned from clubs and other activities for the year. She chose to stay with Kent, and thought the past two years have been “tough” they helped each other through the grief.

“We were both too young to experience that kind of loss,” he said.

As the two healed, Isabella set her sights on becoming a doctor.

“That’s become my goal for the past two years,” she said.

She re-joined clubs and took on more responsibilities — more AP classes, a part-time job. And it’s hard work, but she knows it will pay off.

“I know that someday what I’m doing now is going to directly translate into the rest of my life,” she said.

While she doesn’t know what kind of medicine she’d like to specialize in, Isabella plans to major in biology when she gets to college. Right now, the University of North Carolina is her top choice, but she’s applied to some high-level schools, and in December, she had an application interview with Yale.

And while she doesn’t know what her future holds just yet, or where she’ll end up, Isabella said she thinks she’ll be returning to North Carolina.

“There aren’t many female Hispanic doctors, especially in the South,” she said.

To practice here would be “trailblazing, groundbreaking, something new for this area.”

Isabella said she was thankful for the wonderful network of support she’s had over the years — her mother, grandmother, Kent and her boyfriend of two years, John Dunham, and his family.

For other students who are going through difficult times, Isabella said that if they work hard, it’s possible to get out of a bad place — they don’t have to be stuck there.

“There is hope, there is a way for you to improve your situation,” she said.

From Davie to D.C.: Budd sworn in to Congress