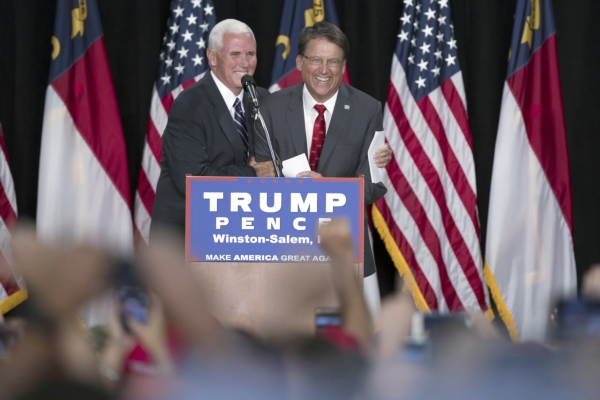 To assess Pat McCrory’s four years as governor, we must begin in 2012. McCrory was a popular, moderate Charlotte mayor, leading the Queen City during a time of explosive growth. Tens of thousands of new jobs were created and infrastructure and transportation improvements were made. Property tax rates and the crime rate were lowered.

Defeated by Beverly Perdue in the 2008 gubernatorial contest, McCrory geared for another run in 2012. Candidate Pat was likable but said our state had a broken government, broken economy and broken educational system. As an outsider, he pledged to bring a fresh perspective, restore trust in state government and promised a “Carolina Comeback.”

On Election Day 2012, North Carolina had the fourth-highest unemployment rate in the nation and our economy was sluggish in recovery. Our state had borrowed $2.5 billion to help pay unemployment claims. Personal and corporate income tax rates were among the highest in the Southeast and fewer than eight of 10 students who entered the ninth grade graduated.

Let’s examine the McCrory record, understanding that our chief executive is considered one of the weakest in the nation and requires legislative cooperation to accomplish major objectives.

One of his first initiatives was “Project Phoenix,” repairing and modernizing state buildings. In his first year, the most substantial tax reform in 80 years reduced both corporate and personal income taxes. The $2.5 billion debt to the federal government was rapidly repaid by cutting benefits to unemployed workers while also raising employer contributions to the system.

Education budgets, cut during the Great Recession, were increased greatly in 2013 and 2015. Teacher pay was increased substantially. The state’s high school graduation rate improved to 85.4 percent and education outcomes improved. The cap on charter schools was lifted and a low-income voucher program gave families more choices.

There was a “Carolina Comeback” in our economy. North Carolina’s unemployment rate dropped to 5 percent, just slightly above the national average. More than 250,000 new jobs were created, and the economy today is stronger and growing faster than in most states in our region. The state treasury stored up almost $2 billion in reserves for emergencies.

And few will deny that Pat McCrory did an exemplary job in handling the aftermath of Hurricane Matthew.

McCrory should have been a shoo-in for re-election, but Pat never fully overcame his outsider status. He traveled tirelessly as cheerleader-in-chief, but after initial cooperation the legislature often ignored or was openly hostile to him.

Rather than use his bully pulpit to enlist public support and call them out, he signed too many initiatives into law he should have vetoed, notably HB2. He did veto at least five bills, all overridden, though McCrory was successful in taking lawmakers to court (and winning) when they exceeded legislative authority.

But just as a governor takes credit for positive accomplishments, Pat got the blame for bad legislation, especially by the media and by courts that overturned many of the bills he signed into law. His 2016 re-election campaign was not well run, focusing too much on teacher pay hikes, supporting I-77 tolls and defending a highly unpopular HB2 instead of touting his positive accomplishments and asking voters to let him finish the job he had started.

He will be remembered as the first governor to be defeated seeking re-election, especially in a year when Republicans dominated. Given the cards he was dealt, it is unlikely any Democrat or another Republican could have been much more effective. History will say he made positive accomplishments and was a good, not great governor.

Chicago has come a long way from the idealized lyric “my kind of town, Chicago is,” which Frank Sinatra made... read more