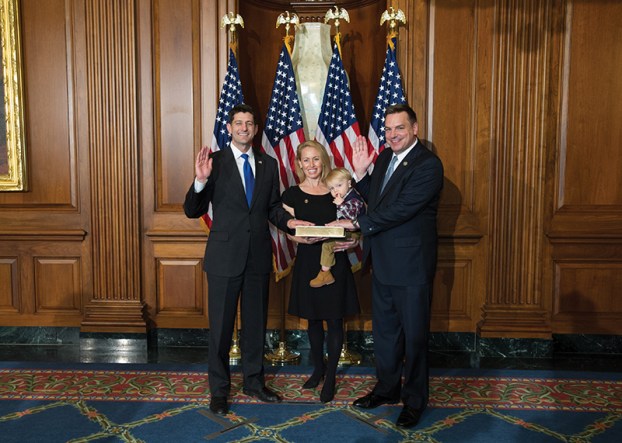 WASHINGTON — U.S. Rep. Richard Hudson already has two terms under his belt, but his third will be notably different.

Hudson, a Republican who represents the 8th Congressional District, was was sworn into his third, two-year term on Tuesday. Hudson says he’s hopeful about his next two years in Congress because of the “unified Republican government.” Republicans hold majorities in the U.S. House and U.S. Senate. Republican Donald Trump will be sworn in as president later this month.

It’s not that Hudson hasn’t been hopeful before about Congress. This time, Hudson believes the pace of progress will be faster than it was during either of his earlier terms.

“I think we’ve got an opportunity before us because we have a unified government and because I think we have a mandate from the people that they want something different than what they’ve been getting from their government,” he said Tuesday after a swearing in ceremony. “I think there’s so many things that we can work together on and get accomplished in the next year to two years.”

At the same time, he said Congress can’t get wrapped up in pushing for solely partisan solutions. Republicans need to ensure Democrats are part of the process, he said.

“I hope we don’t just descend into naked partisanship,” he said. “I think we’ve got an opportunity to bring people together. Repealing Obamacare is going to be very divisive, but why can’t the replacement be bipartisan? Why can’t we bring Democrats in to help craft what’s next?”

Hudson said it’s an honor to be elected to a third consecutive term. In a special June primary, he won by a hefty margin over his Republican challenger Tim D’Annunzio. In November’s general election Hudson beat Democrat Thomas Mills by another comfortable margin — 59 percent to 41 percent.

“It’s always an incredible honor when people choose you to be their voice, and I take that very seriously,” Hudson said. “There’s so many people out there that feel like government isn’t listening and they’re out of touch with them, that this country is going in a direction they don’t agree with.”

On Tuesday, Hudson stood next to Rep. Ted Budd, R-13, as the entire U.S. House took the oath of office. The pair are longtime friends. Later, he participated in a photo opportunity with House Speaker Paul Ryan. Hudson was joined for the picture by wife Renee Hudson and son Lane.

In an interview on Tuesday, Hudson said it’s his job to work to make sure people are adequately represented, that people don’t feel like government is out of touch with their needs.

Hudson says he will serve on the Committee on Energy and Commerce during the 115th Congress, which began on Tuesday. As a result, Hudson said a notable portion of his attention will be devoted to topics related to the committee. Hudson said he will likely also drift into other topic areas, including a “concealed carry reciprocity bill” that he attempted to get passed last session.

The Committee on Energy and Commerce is an exclusive committee, which means that Hudson won’t serve on any others.

Hudson is beginning a new two-year term to represent the 8th Congressional district, which stretches from Concord to Fayetteville, and includes a majority of Rowan County voters. In Rowan, the 8th District in concentrated in the southern and eastern parts of the county.

Hudson plans to open an office in Fayetteville because of the shift in his district’s boundaries. It will be located at Festival Park Plaza 225 Ray Ave Fayetteville, NC 28301.