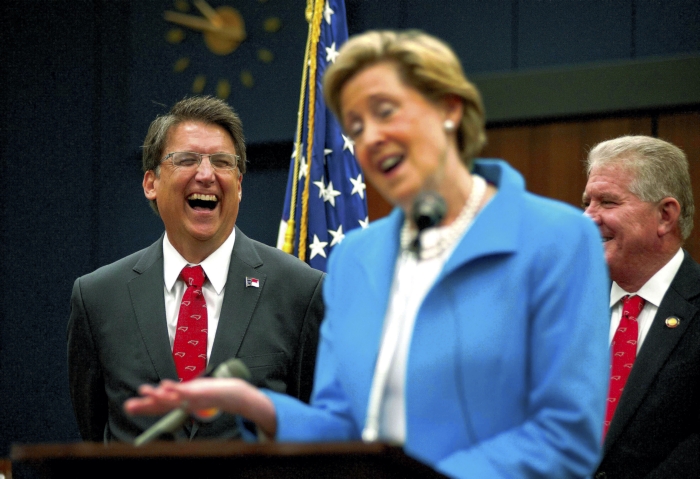 North Carolina Governor Pat McCrory and North Carolina Secretary of Cultural Resources Susan Kluttz came to Salisbury to bring attention to the Historic Tax Credits. State and federal tax credits are credited for the ability for spur renovation of historic residences and buildings by owners. The previous historic tax credit legislation has expired but many, including the governor, believe that they benefit the state and local communities. A large number of buildings in Salisbury would not have been restored without the former credits. JON C. LAKEY / SALISBURY POST

Reams have been written about the end of Gov. Pat McCrory’s administration and the legacy he leaves after serving as one of the state’s few Republican governors. Attention also should go to former Salisbury Mayor Susan Kluttz, a member of the McCrory administration who made a positive impact on the state and the Department of Natural and Cultural Resources she headed.

A longtime Democrat, Kluttz broke ranks and loyally supported McCrory’s election in 2012. She had gotten to know McCrory when both of them were serving as mayors, he of Charlotte and she of Salisbury. Founding members of the North Carolina Metropolitan Mayors Coalition, they seemed cut from the same leadership cloth — practical, popular and dedicated to steering their cities forward.

Naming Kluttz to head what was then the Department of Cultural Resources was a wise move for McCrory; she proved to be an adept administrator and leader. The appointment also seemed to signal that McCrory would continue in the moderate style he used while leading Charlotte, acting more as a pragmatist than an ideologue.

Kluttz and McCrory teamed up to breathe new life into the Historic Preservation Rehabilitation Tax Credit program, which sunset on Jan. 1, 2015. Traveling around the state, Kluttz and McCrory highlighted historic properties that had been saved with the help of the tax credits. Kluttz was particularly relentless, telling the tax credit story to anyone and everyone. She and the governor succeeded in stirring widespread public support, and lawmakers finally agreed to revive the credits in altered form.

Also under Kluttz’s leadership, the Department of Natural Resources was merged with Cultural Resources by adding the N.C. Zoological Park, the N.C. Aquariums, the N.C. State Parks, the N.C. Museum of Natural Sciences, the Clean Water Management Trust Fund and the Natural Heritage Program. The parks were a good fit for a department overlooking historic sites and other cultural gems, and Kluttz embraced them.

When McCrory lost to Roy Cooper, Kluttz didn’t need a pink slip to know she was out of a job too. Unlike McCrory, Kluttz flourished in Raleigh and seems destined for an even greater role. She may be leaving her cabinet-level post, but she emphasizes that she is not retiring. What comes next? Kluttz hasn’t said, but public service is clearly in her blood. So is a knack for positive leadership.