From Davie to D.C.: Budd sworn in to Congress 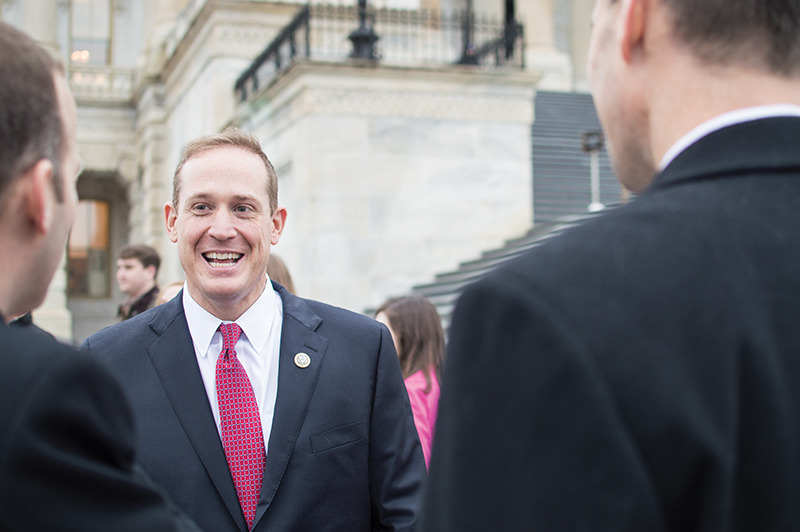 WASHINGTON — A friendship that began roughly 15 years ago continued Tuesday when two North Carolinians took their congressional oaths of office.

Davie County businessman Ted Budd began his first-ever term in elected office with a pat on the back and word of encouragement from a longtime friend, Rep. Richard Hudson, R-8.

“Congratulations, I’m proud of you,” Budd recalled Hudson saying immediately after the U.S. House finished the oath of office.

Moments earlier, Hudson, standing at the back of the chamber, walked up to stand next to his longtime friend, Budd. Hudson recalls the friendship starting roughly 15 years ago. Budd recalls it starting as a result of a hunting trip.

“When the time came to take the oath, I actually walked down to where he was because I wanted to stand with him and take the oath with him,” Hudson said. “I have known him for so long and I knew what kind of journey he took to get here. So, it was special to share that moment with him.”

Budd also shared the moment with a large group of friends and family. His daughters Kathryn and Macy sat next to him on the House floor. Other family and friends sat just above Budd in the House gallery, including wife Amy Kate and son Joshua. After the formal swearing in, Budd took part in a photo opportunity with House Speaker Paul Ryan and then mingled with friends and family outside of the U.S. Capitol while posing for more pictures.

Asked about officially becoming the congressman for the 13th District, Budd called it a great honor.

“It’s a great responsibility and I take it very, very seriously,” Budd said.

People frequently complain about government but not many commit to run for office, he said shortly after filing to run in 2016. At the time, he said Congress needed someone who didn’t intend to make the position a career. On Tuesday, he said that statement still held true.

“I want to come here and not stay past the day that I’m useful,” he said. “I still feel that. If other people feel differently about themselves running and people keep sending them back, then that’s fine. For me, I want to get up, work hard and just stay as long as I’m useful.”

A businessman from Davie County’s Advance community, Budd won his seat by campaigning as an outsider who had never run for office before. Prior to becoming a congressman, Budd ran a gun shop in Rural Hall. Before that, he worked for his family’s facility services business — The Budd Group. He has a bachelor’s degree from Appalachian State University, a master’s degree from Wake Forest and another master’s degree from Dallas Seminary.

Along the way, Budd got nearly $500,000 in financial help from the Club for Growth, who bought TV ads on his behalf. Throughout the campaign, Budd contested the notion that the advertising dollars alone helped him win his congressional seat. Budd said he filled out a questionnaire just like others in the Republican primary.

After winning the primary and nearly doubling the vote count of the second-place finisher, Budd won the 13th District general election by a comfortable margin over Democrat Bruce Davis. Budd got 56 percent of the vote and Bruce Davis received 43 percent. The incumbent at the time, Rep. George Holding, ran for and won the 2nd Congressional District race.

North Carolina Republican Party Executive Director Dallas Woodhouse was in Washington D.C. for swearing-in ceremonies in the U.S. House and Senate. Woodhouse commented on why Budd will serve the 13th District well.

“Congressman Budd is ready to hit the ground running and we could not be more excited,” Woodhouse said. “His deep experience in small business makes him the perfect representative to make America and the new 13th Congressional District great again.”

On Tuesday, Budd’s first vote came shortly after 1 p.m., when he cast his vote for House Speaker Paul Ryan to serve another term in the same position. As members of the U.S. House cast voice votes, Budd sat three rows from the rear of the chamber with his two daughters. The trio shared laughs as members of the House added their own short statements to the start of each voice vote.

With some exceptions, votes fell along party lines and Ryan would go on to win.

Budd said areas where his attention will be focused largely depend on his committee assignments, which he hasn’t yet received. Whatever committee he’s placed on, Budd said he’ll focus on reducing government regulation.

Already, Budd has decided on locations for his district offices, which will be led by District Director Todd Poole.

One office will be located off of NC 801, near Interstate 40, in Davie County’s Advance community. He plans to place another in Mooresville.

Budd said he looks forward to being a “real representative” for the people of the 13th District. Amy Kate Budd, his wife, said Ted will be a great congressman because he has a “great moral compass,” is a hard worker and cares about people.