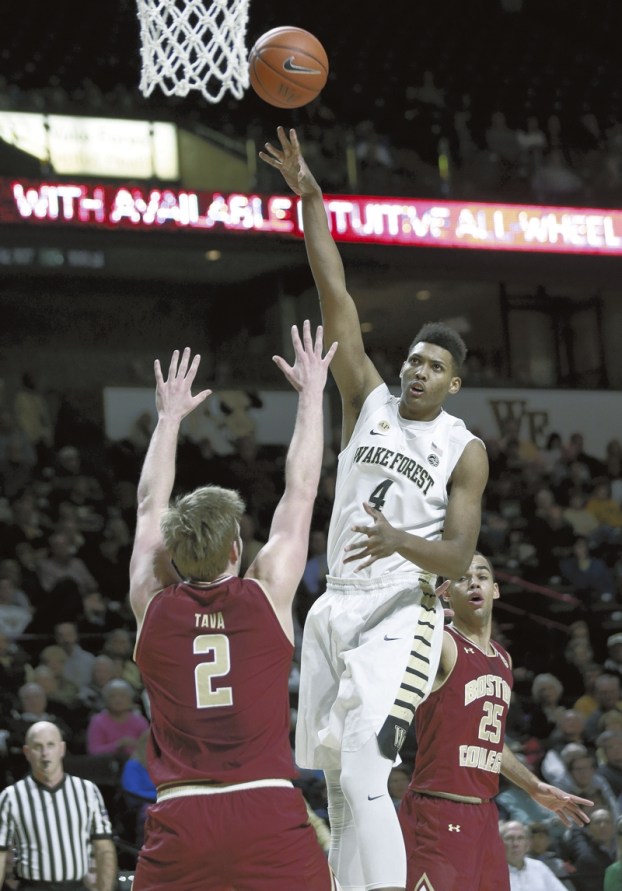 The Demon Deacons struggled for long stretches of the first half, and trailed 43-38 when Jerome Robinson hit a 3-pointer in the early in the second. The Eagles with without a field goal for eight minutes, 55 seconds as Wake Forest (10-5, 1-2 ACC) took a 66-50 lead with 5:57 to play.

Boston College (8-7, 1-1) made only two of its first 16 shots from the field in the second half. The Deacons took full advantage of BC’s futility, and a Collins dunk punctuated a 23-5 run that gave Wake Forest a 61-48 lead.

The crowd at Lawrence Joel Veterans Memorial Coliseum was energized for the first time all night. But groans were audible when Collins, the Deacons’ leading scorer at 16.5 points per game, hobbled off the court holding his knee with 13:06 left.

The fans’ fears were averted when the sophomore forward returned four minutes later, promptly grabbing an offensive rebound and scoring a putback.

Robinson finished with 20 points for Boston College. Ky Bowman added 14 points, but was only 3-of-15 from the field, including a 1 of 8 from 3-point range.

Wake Forest: The Deacons avoided what would have been an 0-3 start to ACC play and another disappointing home loss on the heels of their Dec. 31 setback against Clemson, in which the Tigers scored the game’s final 15 points to leave Winston-Salem with a 73-68 win.

Boston College: The Eagles’ return to winning ways in the ACC was short-lived. Boston College had lost 20 consecutive games against ACC opponents before knocking off Syracuse 96-81 to open its conference schedule on New Year’s Day.

Wake Forest: The Demon Deacons travel to No. 11 Virginia to play on Sunday night.

It will be their fourth game of the season against ranked opponents, all of which have come away from Winston-Salem.

Boston College: The Eagles continue their road trip through the heart of ACC country with a game at No. 8 Duke on Saturday.

Five questions for a new golf year, starting with Tiger