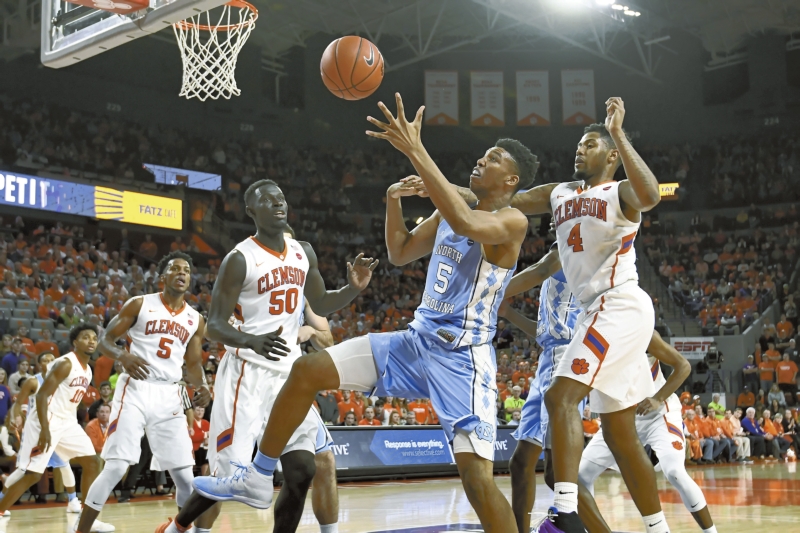 CLEMSON, S.C. (AP) — Joel Berry II was angry with his play in North Carolina’s loss to Georgia Tech last Saturday. He made up for that with a career night at Clemson.

Berry had career highs with 31 points and seven 3-pointers as the 14th-ranked Tar Heels bounced back from their Atlantic Coast Conference opening loss with an 89-86 overtime victory Tuesday night.

“I was very disappointed with my shooting the other night,” said Berry, who was 3 of 13 for eight points in the loss to the Yellow Jackets. “I just went back and put up a lot of shots. I know my team depends on me and I want to be a big-time player to help us win.”

“I kept asking Joel if he was all right,” North Carolina coach Roy Williams said. “It’s been a long time since I had someone play 41 minutes.”

The Tar Heels needed all of them to hold off the Tigers, who came in having won nine straight.

After Meeks’ go-ahead basket, Justin Jackson followed with a bucket and Clemson lost its ninth straight — and 19th of the past 20 games — to North Carolina.

Berry scored 23 points after halftime and appeared to have North Carolina on the way to a victory, ahead 75-67 with less than 4 minutes left. Clemson, though, closed the period with a 10-2 run, capped by Marcquise Reed’s tying 3-pointer with 29 seconds to go.

Meeks finished with 14 points and tied his career best with 16 rebounds. It was his fifth double-double this season.

Jaron Blossomgame had 24 points to lead the Tigers and Avry Holmes had 20 points.

Berry made nine of 13 shots after halftime, surpassing his career best of 24 points set against Oklahoma State this past November.

Clemson coach Brad Brownell said he was encouraged at how his team hung with the Tar Heels.

“We had a chance to win, but just didn’t finish the job,” he said.

North Carolina: The Tar Heels had a huge edge underneath the boards on Clemson — they outrebounded Clemson 51-32 — but they kept shooting and missing outside shots. North Carolina hit just three of 10 shots from behind the arc and several times had the ball stolen when attempting cross-court passes. The Tar Heels shot just 33 percent (19.2 percent from 3) in their loss to Georgia Tech last Saturday. Berry’s talent, though, pushed them through in the second half.

Clemson: The Tigers showed patience and poise when dealing with North Carolina. Each time the Tar Heels would slice into Clemson’s lead, the Tigers would use much of the shot clock and make the extra pass to find the open shot. Clemson hit six 3-pointers in the first half after averaging seven makes a game this season.

Brownell appeared angry with Williams in the postgame handshake. Both coaches, though, declined to discuss the matter with the media. “It was something between Brad and myself. I took care of it,” Williams said.

What’s a Clemson basketball halftime without an appearance by Tigers football coach Dabo Swinney? He and several players came out to cheers from fans eager for Monday’s national championship rematch with No. 1 Alabama. “Just wanted to wish everyone Happy New Year,” Swinney told the crowd. “I hope you had a good New Year’s Eve.”

Clemson topped Ohio State 31-0 on Dec. 31 in the Fiesta Bowl to advance to the finals.

Clemson faces another ranked team when it travels to No. 23 Notre Dame on Saturday.