Searching for something different: Principal of the Year Dr. Jamie Durant leads West Rowan with vision 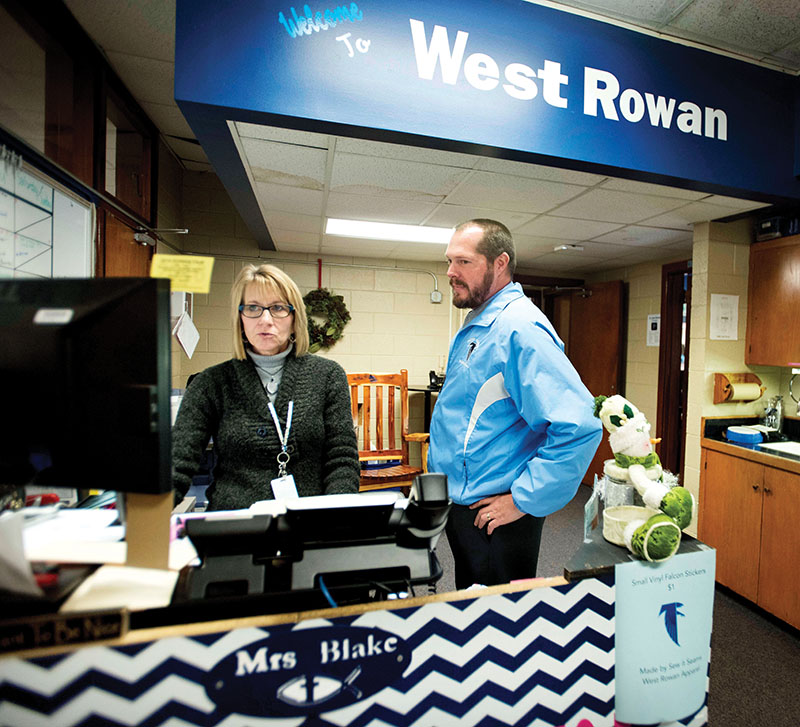 MOUNT ULLA — As he walks the halls of West Rowan High School, principal Dr. Jamie Durant stops often. He asks students about the project they’re working on, examines the cracked screen of a cellphone dropped the previous day or tosses jokes over his shoulder as he passes by.

Durant, 41, was named the Rowan-Salisbury Principal of the Year in August, in honor of the changes he’s made around West in during his nine years as principal.

In addition to pacing the halls and normal duties such as classroom observations, Durant tries to visit each of West’s scattered buildings each day and to check in on substitute teachers.

He’s also implemented a program called “unwall our office,” where he and other administrators take one day a week to spend working from a public location, such as the media center or one of the many hallway tables that pepper West Rowan.

It’s a hallmark of Durant’s leadership style, which he said includes making himself available to students and families. He tries to be laid back, and to let students know that he is someone who will listen.

Durant said he also tries to make student decisions based on the situation.

“I think the face of traditional administration has changed over recent years,” he said

It’s a belief that has left its mark on the school. At West, the expectation for students to sit in the same seat in a classroom for 90 minutes is “non-existent.” The students are up, working in groups, or holding up paper to the hallway walls as they map ideas.

And during lunch — or “Power U” as it’s known — students can work in the library, attend clubs or seek tutoring help. And West Rowan’s media center was one of the first to be remodeled to have a more collaborative, coffee shop atmosphere. It’s even got a café where students can purchase and eat lunch.

As principal, Durant guides the entire school, pulling the staff and students towards a better future. But it wasn’t always that way. In fact, he never planned to be a teacher.

Durant said that his dream growing up was to work in natural resources or to be a game warden.

“I kind of joke it’s a very similar job now that I’m in high school,” he said.

But as a college student in central New York in the mid ’90s, Durant also coached youth sports. It was that experience that led him to teaching. “You would be a good teacher,” he recalls a parent told him.

Curious, he signed up for a few education classes. A short time later, he changed his major — and the rest is history.

“I know I didn’t want a job where every day is the same,” Durant said remembering college.

And that’s what he found in teaching.

He and his family packed up and moved down to North Carolina in 1998. At the time, Durant was teaching fifth-grade, and then moved up to middle school.

But there was still an itch he needed to scratch.

“How do you have a bigger impact?” He wondered.

As a fifth-grade teacher, Durant could only affect the 25 students in his classroom. As a middle school teacher, he worked as a coach and was able to reach more students — but it still wasn’t enough.

For Durant, administration was the answer. He went back to school, and started his career as an administrator in 2002 as the assistant principal at West Rowan, and then at Southeast Middle. In 2007, he returned to West to steer the ship.

“Kinda been here ever since,” he said.

Over the past nine years, Durant has slowly made changes and transitions at the school to make West the place it is today. When he started in 2007, Durant said the graduation rate was hovering around 60 percent. Recently, it’s been as high as 94 percent.

A first-generation college student himself, Durant said he wants students to leave high school prepared for college and the future. His parents both dropped out of high school, and when he was growing up they emphasized the importance of a good education.

“That was an emphasis from them, and I think it carried over,” Durant said.

He thinks it works well. In the two years, Durant said he’s hired several teachers who graduated from West Rowan.

“You know you’re getting old when you’re interviewing students that went to school here,” he joked.

“So I guess my education span is K through Post-Secondary,” he said.

In the next few years, Durant said he’s looking forward to starting a farm-to-table program at West Rowan and to what each day will bring.

“Every day it’s something different,” he said.

Durant lives in Statesville with wife, Penni and two children, ages 5 and 9.