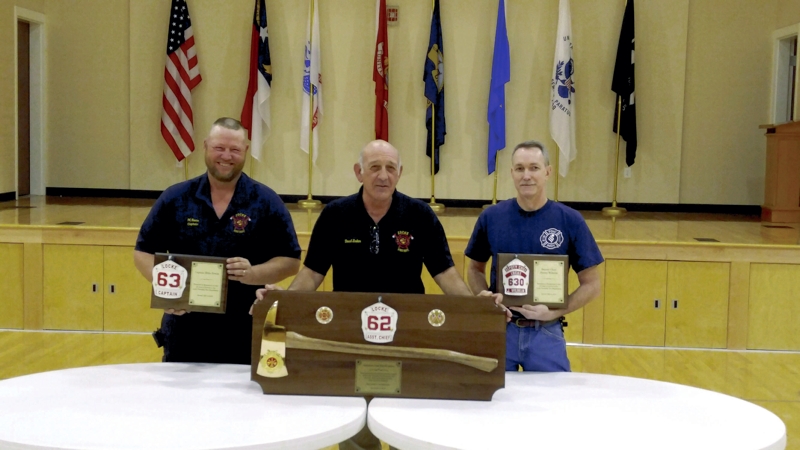 SALISBURY — It’s fair to say that firefighting is a family tradition for David Linker. He remembers when the alarm sounded watching his father, A.L. Linker, run from their house to the fire station nearby.

David Linker has been a firefighter himself, but on Thursday he walked away after 46 years.

“This is a family. The people who do this do it because they care. It’s a way of life,” Linker said of firefighting.

When asked the reason for retirement, Linker said he “got too old.”

“I thought maybe I should’ve done it a few years ago,” he said.

Linker was a student at Catawba College and dropped out along with friend, Glenn Eagle. His friend talked him to enlisting in the Army.

The pair were joining on the buddy system. Somehow Linker signed up for more years than his buddy.

Linker at one point spent 18 months in Okinawa, Japan, and 19 months in Turkey. Before joining the military, Linker had traveled a little within the United States, but not abroad.

Linker always felt Glenn “owed” him after Glenn made an early military exit and so his longtime friend set him up on a blind date.

Linker went on that date and nine months later he was married. He and his wife Peggy have been together for over 45 years.

When Linker’s time in the military was up, he returned to his family home in Rockwell.

Linker is one of five boys. When he was in high school, his youngest brother, Tim, was born. Tim is now the chief of the Rockwell Fire Department. Their father, A.L. Linker, was also a fire chief.

When David Linker joined with Locke Fire Department, they responded to between 150 to 175 calls and this year firefighters responded to 1,330 calls.

“We are all here because that’s where the good Lord put us,” he said.

Firefighters are the ones who run into burning buildings when others are running out, he remarked.

He and Bill Kluttz were the first EMTs at Locke Fire Department, Linker recalled.

Early in his career, all firefighters had to do was fight fires and now they have to obtain and maintain certifications. There’s also medical calls and regular training mandates.

“They’re expecting more out of fire service,” he said.

“Mutual aid — there’s no way we can exist without it,” Linker said.

Making it this far is one of his greatest accomplishments. Linker battled fires alongside Jim Shue, who at 49, died while en route to a call. He was driving a fire truck and was killed in a collision. He also has served alongside Lt. Chris Phillips, who died a few hours after working a traffic accident.

“Ultimately, you hope you do some good,” he said.

He hopes he’s instilling the same attitudes in the younger firefighters who are coming after him.

Locke Fire Chief Rusty Alexander said one of the greatest contributions he felt Linker has made to the department was his push for paid fire personnel who could work 24 hour shifts.

“You have to work as a team,” Linker said.

The fire department held a retirement banquet for Linker along with two others who also retired — Deputy Chief Jimmy Wilhelm after 33 years and Capt. Mike Erwin after 26 years.

This isn’t the first retirement for Linker. He was a property adjuster for Nationwide insurance. When he retired, he promised his wife they would take some trips. They haven’t taken as many trips as planned, but instead they’ve spent more time with their five grandchildren.