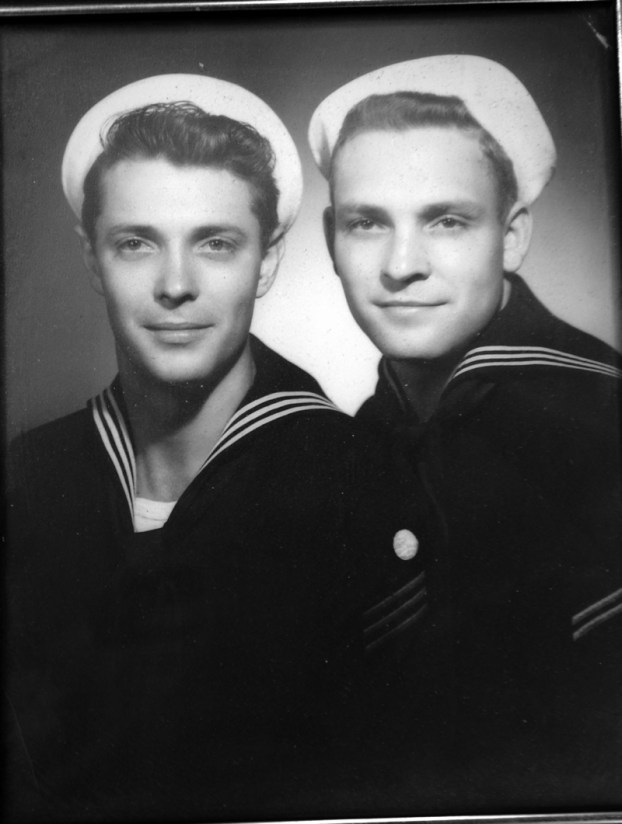 Yesterday: When brothers were sailors The brothers as children.

Jack Swicegood provided these two photographs to the Post. On the left, in a picture made in the 1930s, brothers Bobby Skinner Swicegood, left, stands with Jack in the yard outside their home in the Ellis Cross Roads community. Bobby was three years older than Jack. That’s Calvary Baptist Church behind the boys to the right. Jack thinks their mother made the sailor suits they are wearing. The picture on the right was taken in a portrait studio during a day in the early 1950s when the Navy brothers happened to meet each other in San Diego. Bob’s ship had just arrived in port, and Jack, whose ship also was docked for a time in San Diego, knew to look for his brother. It was a happy reunion and one worthy of taking a picture to document it. In the 1950s photo, Jack is on the left. Bob Swicegood died in December 2015 at age 87. Jack Swicegood still lives in the same family home in Ellis Cross Roads. A sister, Betty Swicegood Cruse, 91, lives next door to Jack and his wife, Peg. Betty, Jack and Bob were among eight children born to the late John Earl and Ora Skinner Swicegood.

Back on Nov. 21, the Post ran a photograph of people who worked in the No. 7 Weave Room at... read more