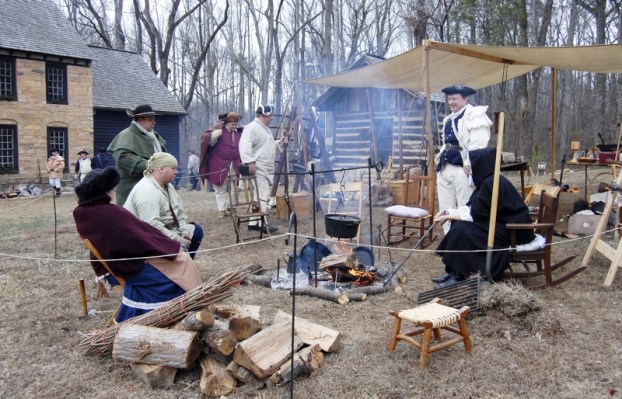 Amanda Raymond/Salisbury Post The First Regiment of the Mecklenburg Militia/Hopewell Company roasted food over a fire, marched and fired off rifles at the 32nd annual German Christmas Celebration at the Old Stone House on Saturday.

GRANITE QUARRY – Visitors got a look, and a taste, of how Christmas was celebrated during the colonial days of Rowan County.

The Rowan Museum sponsored its 32nd annual German Christmas Celebration on Saturday at the Old Stone House. The celebration will continue from 12 p.m. to 4 p.m. on Jan. 1 at 770 Old Stone House Road.

Visitors toured the Old Stone House, which just celebrated its 250th anniversary in September. The house was decorated with simple greenery on the window sills and a wreath that Kaye Brown Hirst, former executive director of the Rowan Museum, made with components that the residents might have used at the time, including a snake skin, bee hive and bird’s nest.

The Windsong Recorder Ensemble played music at the entrance of the house and guides dressed in period clothing led the tours, telling visitors of how colonial families celebrated Christmas.

In addition to tours of the house, visitors enjoyed basket-weaving, candle-making and food cooked over a fire, including potato soup and vinegar chicken. The First Regiment of the Mecklenburg Militia/Hopewell Company, a Revolutionary War reenacting unit, played a Rowan County militia roasting food over a fire, marching and firing off rifles.

People could also throw holly sprigs into a fire, signifying the burning away of troubles from 2016 and bringing in good luck for 2017.

The special highlight of the event was the use of a reconstructed outdoor bake oven to make fresh bread and cookies for guests. This event was the first time the oven had been used for the public.

“The bake oven adds a new dimension to everything,” Aaron Kepley, current executive director of the museum, said.

The museum partnered with the Brown-Fisher Association and private sponsors to rebuild the colonial-style oven.

Kim Sides and her family visited the house for the first time on Saturday. She said they are from Salisbury and her children were born in the county, so it was about time they paid a visit to the house.

Sides said her family enjoyed learning about the history of the house and showing her daughters what it was like to live in colonial times so that they were “thankful for what they have today.”

Frankie Raymer, wife Franda and daughter Misa live nearby and visited the Old Stone House a few years ago.

Misa said she enjoyed learning about the mattresses the colonial residents used to sleep on and how they used to make clothes.

“I love history,” she said.

Franda said it is important for people to know their history.

“Seeing history means more than reading about it,” she said.

Angie Lovingood and Michelle Sachse, co-leaders of a Girl Scout troop, brought a group of Girl Scouts to the event for them to earn a badge.

Lovingood said she enjoyed the tour led by volunteer Theresa Pierce, who focused on the women’s role in the house to help the girls earn the badge.

The girls said they learned about the life of Michael Braun, who built the house, and how women had to hand-make clothes and cook food over a fire.

Rain or shine, the celebration will continue on Jan. 1. Hirst said it is a time to appreciate a simpler way of life.

“People should come out here to celebrate the simple things in life,” she said.

Admission is $5 for adults and $3 for students. For more information, contact the Rowan Museum at 704-633-5947 or rowanmuseum@fibrant.com.

Rowan County homicides on the rise in 2016