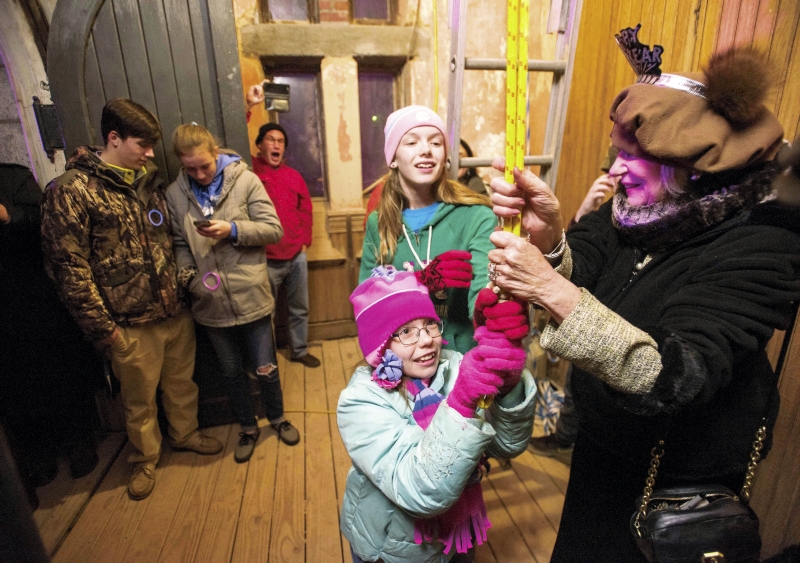 JON C. LAKEY / SALISBURY POST Salisbury mayor Karen Alexander (right) get some help ringin the bell in the bell tower from Abby (center top) and Hannah Bogle (front) A large crowd turned out at the historic Salisbury Bell Tower park to ring in the new year. The bell in the tower once again rang in the new year after a recent remodel project. Sunday, January 1, 2017, in Salisbury, N.C.

SALISBURY – The ringing of the bell from Salisbury’s iconic Bell Tower at the corner of West Innes and South Jackson streets was heard far and wide for the first time in years on Saturday night to bring in 2017.

The Parks and Recreation Department sponsored the annual New Year’s Eve at the Bell Tower on Dec. 31 from 8 p.m. to midnight.

In recent years, the Salisbury Fire Department has brought a bell to ring for the new year while the Bell Tower’s bell was kept silent for safety reasons.

General contractor Alfred Wilson and Co. was contracted to perform the repair work on the 1892 tower, which began in October with a grant from the North Carolina Department of Commerce.

The work was part of the Blanche and Julian Robertson Family Foundation’s first efforts at creating a downtown park on a 3.5-acre city block bounded by West Innes, South Jackson, West Fisher and South Church streets.

Mayor Karen Alexander and David Hagy, conductor of the Salisbury Symphony and advocate for the restoration of the Bell Tower and creation of the park, were the first people to ring the bell once the countdown was complete.

There was also a live feed of the New Year’s countdown from Times Square in New York City, food from a variety of food trucks, games and activities and music from Live House and DJ Doublebass to keep attendees dancing and having fun while they waited for midnight.

The Bell Tower was lit up in purple and a sparkling disco ball swinging from side to side could be seen through the top window. JON C. LAKEY / SALISBURY POST Salisbury’s Livehouse band entertained the crowd. A large crowd turned out at the historic Salisbury Bell Tower park to ring in the new year. The bell in the tower once again rang in the new year after a recent remodel project. Saturday, December 31, 2016, in Salisbury, N.C.

Earlier in the night, Liberty Brown said she was on her way to Go Burrito when the music from Live House drew her over to the Bell Tower.

“The band was awesome,” she said.

It was Brown’s first time at the event and she liked that all ages could have a good time.

“It brings the community together,” she said.

Beth Dixon and husband Glenn have been attending the event for years. Beth said she loves to hear Live House play. She said her family attended the event back when they could still ring the bell in the Bell Tower so it was cool to attend the event where it would be rung again.

“We think it’s pretty special to be back here again for that,” she said.

Debbie Hoffman attended the event several years ago, but spent the last few New Year’s Eves asleep. This year she was awake and excited. She loved the music and danced along to the “Electric Slide,” “The Wobble” and “The Cupid Shuffle.”

She said she was looking forward to hearing the bell.

“That’s good that I’m getting to hear it for the first time in several years,” she said.

At the night’s end, people gathered around the Bell Tower for their turn to pull the rope to ring the bell.

As “Auld Lang Syne” played, family and friends hugged and kissed their loved ones, ready to start the new year.