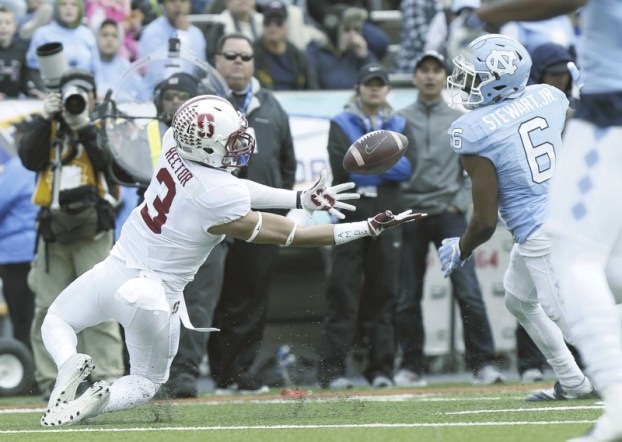 EL PASO, Texas (AP) — Stanford got its usual dual-threat, standout performance from its running back Friday, but this time it wasn’t Christian McCaffrey.

Bryce Love took over for the absent McCaffrey in the backfield, running for 119 yards and catching a 49-yard touchdown pass to help No. 16 Stanford beat North Carolina 25-23 in the Sun Bowl.

“I always feel like my next game will be my best one,” said Love, channeling his inner Tom Brady when asked if this was his biggest game or best win. He then added, “But it’s always good to win.”

“When the game was on the line and we had to make a big play, we did,” Stanford coach David Shaw said. “It was an outstanding football game. Two really tough, talented football teams played all the way to the end. Thankfully, our guys made enough plays at the end to seal the victory.”

McCaffrey skipped the bowl game to focus on his NFL career. Still, in the postgame press conference, Shaw made sure his contributions to the team weren’t overlooked.

“You heard my comments (in the postgame ceremony) thanking Christian,” he said. “When we weren’t playing well, he was playing great. At the end of the year, he played so well. He played so hard until the rest of us on offense started picking it up around him. So this six-game run that we finished the season on is a large part to him.”

Enter Love, who showed flashes of what he could do with a 100-yard-plus performance and a score against Notre Dame. He ran for more than 600 yards this season in a backup role, though everyone said they were excited to see what he could do. That included North Carolina, which also recruited the Wake Forest, North Carolina, product.

Stanford took a 25-17 lead on Conrad Ukropina’s 27-yard field goal with 3:23 left. North Carolina was forced to punt on its next series, but used two timeouts to get the ball back.

After taking over at their own 3, the Tar Heels drove 97 yards in 10 plays and 1:11. After competing passes of 44 and 27 yards, Trubisky capped the drive with the 2-yard scoring pass to Howard.

Stanford then sacked Trubisky on the 2-point try, a rush led by Solomon Thomas forcing the quarterback to retreat before being taken down. Thomas was selected the game’s MVP.

Stanford safety Dallas Lloyd intercepted two of Trubisky’s passes, returning the second 19 yards for a touchdown to give Stanford a 22-17 lead early in the fourth quarter.

“If you’re in the right place at the right time, good things will happen,” Lloyd said.

Trubisky also is projected by some as a possible first-round pick if he declares for the NFL draft. But the junior and former Ohio Mr. Football wasn’t ready to even think about that after the game.

“I’m not going to think about it for a couple of days,” he said.

Trubisky finished 23 of 39 passing for 280 yards, with two touchdowns and two interceptions.

Stanford: The Cardinal faced a lot of problems Friday. Starting quarterback Keller Chryst left with a knee injury in the second quarter, forcing backup Ryan Burns into the game. At that point, they were without their top two backfield weapons. They finished the game with 12 penalties for 85 yards, but still won. “We got a little sloppy,” Shaw said.

North Carolina: The Tar Heels hurt themselves in the first half with two turnovers, each of which led to a field goal, then added a killer in the third quarter when Lloyd intercepted Trubisky’s pass and returned it for a TD. UNC couldn’t overcome those mistakes.

Ukropina kicked four field goals to tie a Sun Bowl record and was named the game’s Most Valuable Special Teams Player. He also set a Stanford record for field goals in a season with 22. He set the record with his second-quarter kick, then added two more. “It feels great. I love winning with my teammates.”

Stanford: Going into the Sun Bowl without McCaffrey, Shaw was asked if anything would change. He said no. The same goes for the Cardinal going into next season. Their season opener is Sept. 2 at Rice.

North Carolina: The big question is whether or not Trubisky will return next year. The Tar Heels’ season opener is Sept. 2 at home against California.