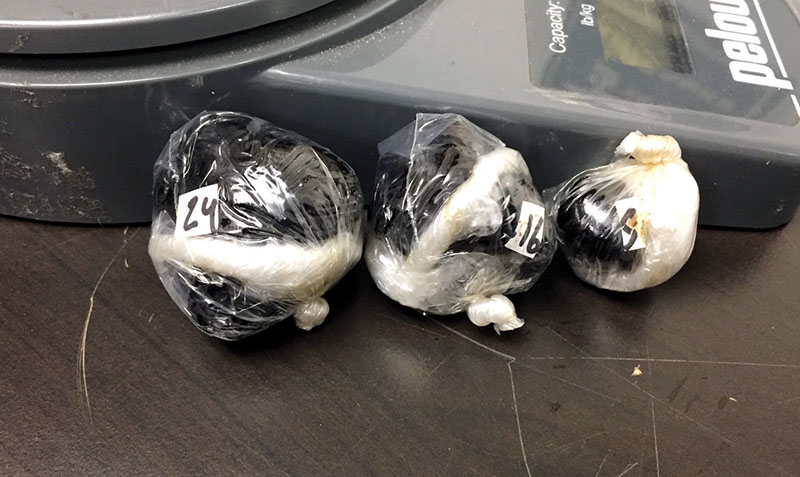 ROWAN COUNTY — Heroin, methamphetamine and prescription pills rank at the top of the list of controlled substances seized by local law enforcement in 2016.

Each year, investigators serve a number of search warrants where they seize drugs, firearms, cash and, in some cases, vehicles.

The Salisbury Post asked the Rowan County Sheriff’s Office and the Salisbury Police to provide some details of the search warrants served in 2016, particularly for drug busts.

Salisbury Police carried out nine such search warrants, leading to 28 arrests and 130 charges. The majority of the warrants were served in the latter part of the year, at the following locations: Oct. 13 at South Shaver Street, Nov. 3 at East Lafayette Street, Nov. 29 at Mocksville Avenue, Dec. 4 at Lakewood Drive and Dec. 13 at West Monroe Street.

The most recent drug bust, Dec. 13, resulted in charges for two men, Demarco Antoine Olgesby and Kenneth Derrell Lark. Police said the charges followed a two-month drug  investigation that led them to the Walmart parking lot, 323 S. Arlington St., where they arrested Olgesby after a short chase.

Officers seized crack cocaine and over $2,000 from Olgesby. They searched his West Monroe Street home and confiscated more than $8,000, some 97 grams of cocaine, pills and more than two pounds of marijuana.

Lark, 34, remains at large. He ran from the Monroe Street home while officers were conducting the search.

This year alone, the Salisbury Police have confiscated a total of $30,100.75, one vehicle and 13 firearms. In the course of their investigations, police have seized 276.8 grams of cocaine or just over half a pound, 177.4 grams of heroin, 6,895.6 grams of marijuana or slightly more than 15 pounds. Officers collected 311 pills and 960 grams of meth or just over two pounds. Of the search warrants served this year, police also seized 51 items of drug paraphernalia such as rolling papers, digital scales, and spoons or straws with drug residue on them.

Rowan County and many other areas around the Charlotte metropolitan area have been plagued by a continuing increase in heroin and prescription narcotic-related incidents, said Chief Deputy David Ramsey of the Rowan County Sheriff’s Office.

Ramsey said Rowan deputies have actually found heroin users passed out in vehicles at intersections or in parking lots after using the drug.

In July, a Woodleaf couple were found passed out in their car after an officer getting gas at a convenience store spotted them. Jessie Lee Hastings and her husband David Wayne Hastings were charged by Salisbury Police after they were discovered in the Sheetz parking lot. David Hastings had a syringe in one hand pressed against his other arm. Their child, who appeared to be about 2 years old, was in the back seat of the hot car, screaming.

Heroin is cheap and available, Ramsey said, so many prescription drug abusers turn to heroin.

The Rowan County Sheriff’s Office, assisted by federal, state and local partners, has made significant seizures of heroin from people trafficking heroin.

On Nov. 29, two people were charged following a six-month undercover investigation by the Sheriff’s Office, assisted by Salisbury Police and U.S. Department of Homeland Security Investigations. During that investigation, John Wayne Gray Jr. and Sarah Marie Hoffner Pharr, both of 314 Mocksville Ave., were arrested. The two delivered 43 grams of heroin in the parking lot of a business in the city limits of Salisbury. Investigators searched their home and found $480, heroin, pills, a shotgun and ammunition.

Some of these seizures this year have involved ounce and multi-ounce quantities, he said.

To date, these seizures have totaled almost one pound.

Rowan County continues to have a significant issue with methamphetamine ice, Ramsey said, that originates from Mexican national suppliers inside and outside North Carolina, as well as domestically produced from clandestine “one pot” lab operations. Cases originating in Rowan County have led directly to the seizure of over five pounds of methamphetamine ice, with the single largest seizure being three pounds.

On Nov. 18, Rowan authorities charged Cindy Barnes Dixon after a three-year drug investigation. She was arrested after delivering 27 grams of black tar heroin to a location in the southeastern part of the county. Investigators have said they determined she was obtaining significant amounts of heroin through Mexican national drug suppliers in the Charlotte metro area and then internally carrying the narcotics to Rowan County, where they were then distributed.

The Sheriff’s Office has seized over $500,000 in cash during the past year, with the single largest seizure being $346,000. These seizures occurred during traffic stops, arrests and execution of search warrants.

Ramsey said much of this money will be forfeited through sharing agreements with federal authorities or given to the North Carolina Department of Revenue for unauthorized substance tax violations. Some funds will be returned to local law enforcement for use in investigations and other authorized purposes.

Many of the drug-related investigations have resulted in the seizure of firearms by armed felons. The bulk of these cases are screened by the Rowan County District Attorney’s Office and the U.S. Attorney’s Office for the Middle District of North Carolina, for federal prosecution, with follow-up investigations conducted by the United States Bureau of Alcohol, Tobacco, Firearms and Explosives (ATF).

This cooperative effort has been an effective tool in taking armed and dangerous criminals off the streets, Ramsey said.