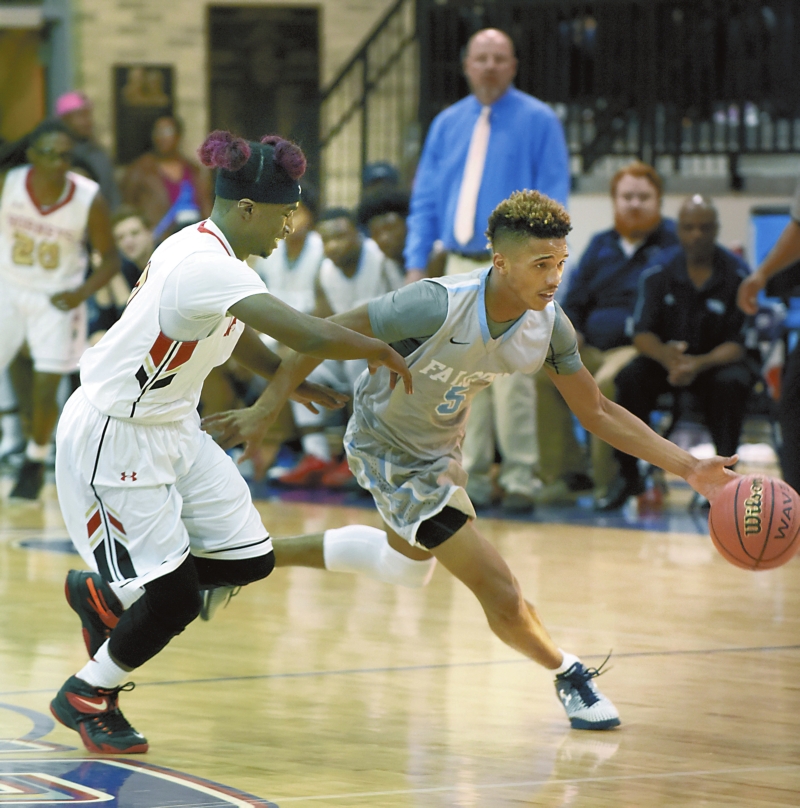 Two nights ago the Falcons dethroned defending champion North Rowan in their Dale’s Sporting Goods/Sam Moir Christmas Classic opener at Goodman Gym. On Thursday, they planted the tournament’s No. 1 seed, shuffling past Salisbury, 73-65.

“It’s kind of a big statement,” senior Austin Love said after fourth-seeded West (7-3) earned a berth in tonight’s championship game against Carson. “Everyone expects the No. 1 team to win the whole thing. Well, here we are.”

There they are after placing five scorers in double figures and forcing Salisbury (6-3) away from what it does best — penetrate the lane, crash the boards and beat you up inside.

“We took 20-something 3-pointers,” coach Bryan Withers reported. “That’s not us. The crowds get big and some of our guys don’t react well to it. Everyone was trying to make the big highlight play.”

West made enough of them to win for the sixth time in its last seven games. Junior Caleb Mauldin contributed 16 points and 12 rebounds despite ongoing foul trouble. Love (10 points, 12 rebounds) had a double-double while teammates Paris Hillie (16 points), Kortez Weeks (13) Darius Kure (13) each made had-to-have-it baskets in clutch situations. Salisbury’s Trell Baker had a game-high 23 points while Shaleek Williams scored 15.

“It’s gonna be a big game, whether it’s in the Moir or Spencer or Salisbury or Mount Ulla,” said winning coach Mike Gurley. “You play North and Salisbury and you’ve got to bring a lot of toughness. We feel fortunate to be where we are because we’ve beaten two really good teams.”

And did it in similar fashion. For the second straight night the Falcons lost a halftime lead in the third quarter before rallying. Salisbury erased a 37-31 deficit and ever-so-briefly went ahead, 40-39, when Williams muscled in for an offensive rebound and put-back with 5:37 remaining in the period. “They came out and took the lead,” Gurley emphasized. “Kind of like deja vu from last night. I think we recovered a little faster tonight.”

Even during that 9-2 run Withers had trouble recognizing his own team. “In the third quarter we made a run doing things we don’t normally do,” he said. “We were shooting threes. We need to get in the paint and use the boards. We just didn’t do and didn’t play the way we’re capable of playing. That’s what bothers me the most.”

West trailed for only 40 seconds before Weeks drove the lane for a layup that pushed the Falcons back in front. And with Mauldin chained to the bench with four personals, they went up by five points late in the period when Hillie needle-pointed a bounce pass to Love in the lane for an uncontested layup.

Hillie caused further damage in the fourth quarter when he repeatedly found a seam in Salisbury’s defense and attacked. He had a layup and converted six of 10 free throws in the final period. “That was Paris Hillie’s kind of game,” Gurley said.

“Straight-line drives aren’t acceptable,” Withers added after the Hornets were called for 32 fouls. “Someone like that, you’ve got to make him bubble-drive.”

West never felt comfortable with the lead, but appeared in good shape after Kure sank two free throws and provided 69-60 edge with 1:11 to play. The Falcons took care of the ball in the closing seconds, playing keep-away until SHS was forced to foul.

“You always want to slow the game down in that situation,” said Weeks. “Get your offense right, run a play and look for a shot.”

For their next trick the Falcons will try to make Carson disappear. They outscored the Cougars, 76-59, on Dec. 6 in an early-season SPC matchup.