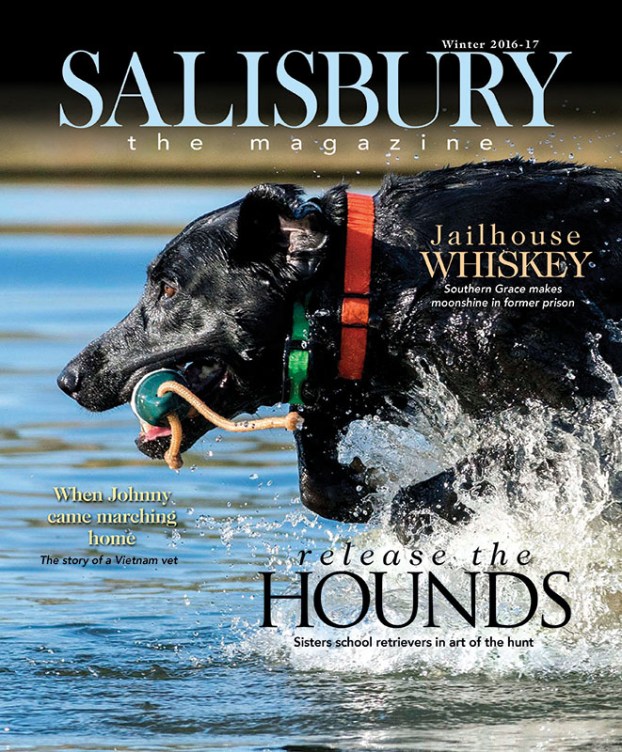 The cover of the winter edition of Salisbury the Magazine. Cover by Andy Mooney, Salisbury Post.

SALISBURY— The winter issue of Salisbury the Magazine has reached subscribers, and the cover story features Sloan and Samantha Williams, sisters in Cleveland who train hunter retrievers.

A visit to the women’s S&S Outdoors off Amity Hill Road offers an inside look at how Sloan and Samantha prepare Labrador retrievers and other breeds to work and show as hunting dogs.

The magazine also tells the story behind Southern Grace Distilleries Inc. and its new home in the former state prison facility in Mount Pleasant. A place where convicted moonshiners once served prison sentences is now where Southern Grace makes its legal, 130 proof Sun Dog corn whiskey.

Elsewhere in this issue, contributing writer Dicy McCullough introduces readers to Dr. Johnny Graham and how his experiences in the Vietnam War stayed with him as he tried to re-establish his life back home.

Deirdre Parker Smith shares recipes and some of the traditions behind the foods we eat for a prosperous new year. Elizabeth Cook highlights the East Bank Street home of Carol and Acey Worthy, who found the 1899 cottage quite to their liking.

The winter issue also includes features on piano man Joe Ponds, the fashion choices behind ‘Tweeds and Steeds,” a guest column from Diane Dillon Hooper and a question-and-answer visit with Rowan Original Rita Foil, the voice students and parents long to hear on snow days.

As always, Smith gives some new reading recommendations in “Bookish,” Jon Lakey shares an interesting photograph in “Through the Lens,” and plenty of Rowan Countians populate the “Scene” pages.

The March issue will reach subscribers in mid to late February. Salisbury the Magazine publishes nine times a year.