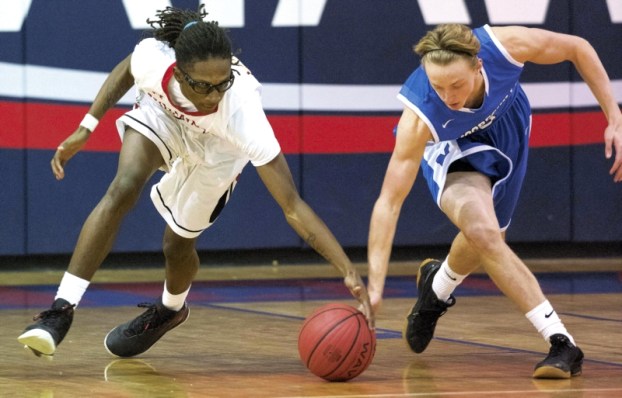 SALISBURY — Top-seeded Salisbury’s boys basketball team never found its happy place in the Dale’s Sporting Goods/Sam Moir Christmas Classic at Goodman Gym this week.
What the Hornets did find was third place, courtesy of Friday’s 74-71 consolation-round victory over Mooresville.
“It’s not what we wanted,” senior Tre Oats said after Salisbury (7-3) struggled to shake off the sixth-seeded Blue Devils. “But we had to take advantage of what was there. It’s what was given to us.”
Salisbury’s Jekyll-and-Hyde performance included three-and-a-half minutes of lights-out basketball to start the second half, when it scored 17 points in a hurry and built a 39-24 third-quarter lead.

There was Oats banging inside for three big-man layups, Trell Baker connecting on a 15-footer and Will Leckonby finally finding his range with a 3-pointer from the left side.
“We were just playing our game, inside and outside,” said coach Bryan Withers, who found more to dislike than like in the win. “But it’s not the game we wanted. These guys thought they should be playing for the championship. That made it really tough to motivate them.”

That became apparent midway through the third period, when Mooresville (5-7) began carving into its deficit. Sparked by high-scorer Noah Allen (23 points) and power forward Tay Davis, the Blue Devils used a 20-5 scoring frenzy to tie the score, 54-54, early in the fourth quarter.
“Turnovers,” said Oats. “We couldn’t connect on a lot of passes. We needed to get back to doing what we did early in the season.”
They did, but not before falling behind, 66-60, on Allen’s three-point play with 3:49 remaining. “We had to get them going again,” said Withers. “You find out who your real players are when you’re down like that.”
Salisbury’s climb out of the hole started when Baker (18 points, 7 assists, 6 steals) converted a pair of free throws, then swiped a pass and turned it into a full-court, runaway layup. Oshaun Robinson’s layup — off a lovely feed from Oats — tied the score 68-all with 1:57 to play. And Leckonby’s tip-in provided a lead the Hornets never relinquished.
“It was just passing the ball around and finding open people,” Oats said after contributing 20 points, 13 rebounds and six blocks. “We were determined to come back after last night’s loss.”
The 6-foot-6 Oats was a one-man SWAT team in the fourth quarter, when he blocked five Mooresville shots.
“Tre did some things in the second half that I really liked,” Withers said. “But I’d still like to see him become more aggressive. He’s got the body. He’s got those long arms.”
Yet, when it ended, neither Oats nor any of his teammates were turning cartwheels.
“I saw stuff today that will take me the rest of the weekend to get over,” said Withers. “This may have been our worst game of the year, but we’re fine. Disappointed, but somebody had to finish third.”

By Marny Hendrick sports@salisburypost.com SALISBURY — The North Rowan girls came within a whisker of securing their first win of... read more