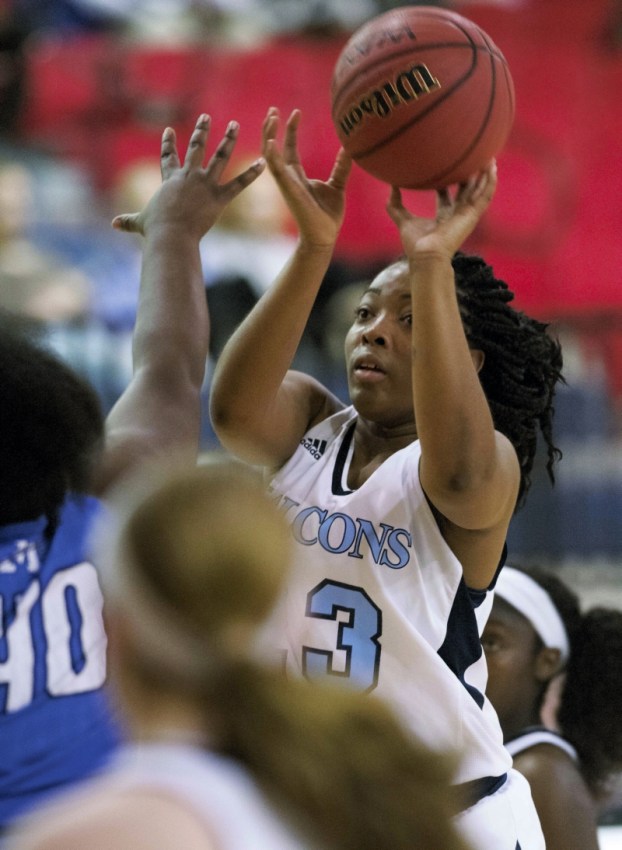 “That really was a great game,” Mooresville coach Andy Sparks said. “About as much as fun as a game can be when you don’t win it.”

Third-place games are played by teams that had championship dreams crushed in discouraging semifinals the day before, but neither team showed any sign of fatigue or any sign of not caring. Third-seeded West Rowan (8-3) managed to win mostly because Alexander, a junior forward, scored 10 of her points at crunch time.

“We couldn’t get first place, so we wanted third place,” said Alexander, a first team all-county player as a sophomore . “We didn’t want to leave here with another loss, so we were determined to finish strong.”

West Rowan connected on eight 3-pointers, one more than the fourth-seeded Blue Devils (7-5). Taylor Poole and Mary Sobataka hit three 3-pointers each for the Falcons. Shyann Vaughters and Miyanah Pruitt added one apiece.

Logan Good made three long ones for Mooresville  and scored 20 points.

“The thing that we can do is shoot,” Sparks said. “We didn’t show that at all in the semifinals (a 58-29 loss to Salisbury), but we really can shoot. We were a  lot better today than we were in the semifinals, and I think West played better, today too.”

West held a slim edge late in the second quarter, but  Mooresville snatched away that lead and the momentum when Good nailed a buzzer-beating 3-pointer. The Blue Devils were up 27-25 at the break.

“We weren’t doing  the job on the glass, in the first half and foul trouble had something to do with that,” West coach Ashley Poole said. “Fouls have been the story for us in quite a few games, but we still hung in there.”

The first 11 minutes of the second half were back-and-forth. When Mooresville freshman Imara Harrell, a softball player who represented Rowan Little League in the 14U World Series, made a layup with 4:30 left to play, it was 55-all.

With the Falcons down 59-58 with 3:12 remaining, Sobataka rose and buried a confident 3-pointer to put West up two, but Mooresville came right back. When Taylor Cullen got a layup off a West turnover, the Blue Devils led 63-61, and the clock was ticking under two minutes.

West had been firing quickly and from all over the court on offense, but with the game on the line, the Falcons  slowed down, looked for  Alexander — and she responded. Her lead-changing, three-point play with 1:43 remaining was the biggest moment of the afternoon and put the Falcons ahead for good at 64-63.

“We talked over and over about sitting on No. 23’s (Alexander’s)  left hand and we even called timeouts to remind our girls that she’s left-handed,” Sparks said. “But she still beat us to her left.”

Abigail Wilson, who provides most of West’s size, had fouled out, so it was mostly up to Alexander if the Falcons were going to get another defensive rebound. Mooresville missed three times on a huge possession, and Alexander grabbed the third miss with 1:15 left.

West turned it over, but then Alexander boarded another Mooresville miss. Alexander got to the left side again and she’s automatic when she gets there. She put in her final bucket for a 66-63 lead.

“It kind of looked like she was going in slow-motion,” Poole said with a smile. “But she finished.”

Mooresville wasn’t finished. Down three, the Blue Devils had the last two shots. They got them up in the final seconds, including a good-looking 3-pointer from the right corner by Good that bounded off the rim as time expired. Sobataka contested the shot.

“We knew they had good shooters and we had to get a hand in their faces,” Sobataka said. “When that ball  bounced out to her in the corner, I defended the shot the best that I could, but I knew I had to defend her without fouling.”

For West, the exciting win helped relieve some of the pain from Thursday’s  loss to Carson. For Mooresville, seeing some shots fall boosted confidence.

“When your team’s not making any shots you can look like a pretty stupid coach,” Sparks said. “But when you’re making shots, you can look pretty smart.”