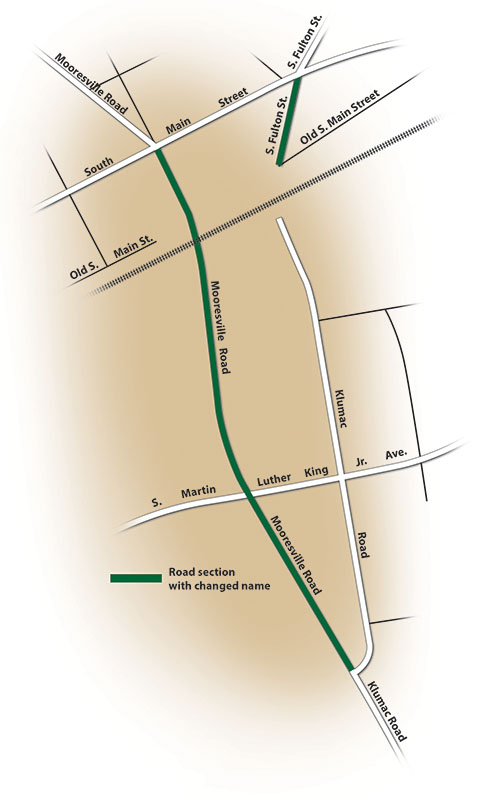 SALISBURY — Those who live and work near the Klumac Road extension may have noticed a few changes in addition to new pavement.

The extension and railroad underpass, an N.C. Department of Transportation project that began in 2013, forms a four-way intersection with Mooresville Road and South Main Street and continues south on the west side of Johnson Concrete eventually forming a four-way intersection with Martin Luther King Jr. Avenue and merging with the old section of Klumac Road. During construction, the Klumac Road railroad crossing was closed. The extension and underpass opened Oct. 31.

But it wasn’t the only thing to get a makeover. Area residents can now expect new street names, courtesy of a decision by the Salisbury City Council at its Dec. 6 meeting.

Brindle added that there is no one addressed on that leg of road.

“So it would make zero impact and would actually make more sense after the crossing at the railroad tracks,” Levi Coldiron, GIS coordinator for the City of Salisbury said at the meeting.

While the project has been called the Klumac Road extension, the new segment of pavement will not bear that name, Brindle said. Instead, Mooresville Road now hops South Main Street and South Martin Luther King Jr. Avenue. It doesn’t change until it intersects with the original Klumac Road — according to Brindle, everything south of that is then Klumac Road.

The City Council debated whether to change the name of rest of Klumac Road, entirely, but Mayor Karen Alexander argued for a choice that would have the least impact on local property owners. At the meeting, she cited a letter from a long-standing Klumac Road business that was concerned about a potential change.

According to Brindle, there are 19 property owners off the original Klumac Road who would have been affected by a road name change.

The new street name configuration is the result of a compromise posed by Coldiron.

“So it would essentially be Klumac Road as it’s always been in our community for more than 40 years,” Alexander said.

Currently, there are no properties addressed off the new Mooresville Road extension. Mayor Alexander said at the meeting that the compromise had been greenlit by the police and fire chiefs.

This change was originally noted as a bullet item in a Dec. 7 article about the City Council meeting.

SALISBURY— The winter issue of Salisbury the Magazine has reached subscribers, and the cover story features Sloan and Samantha Williams,... read more