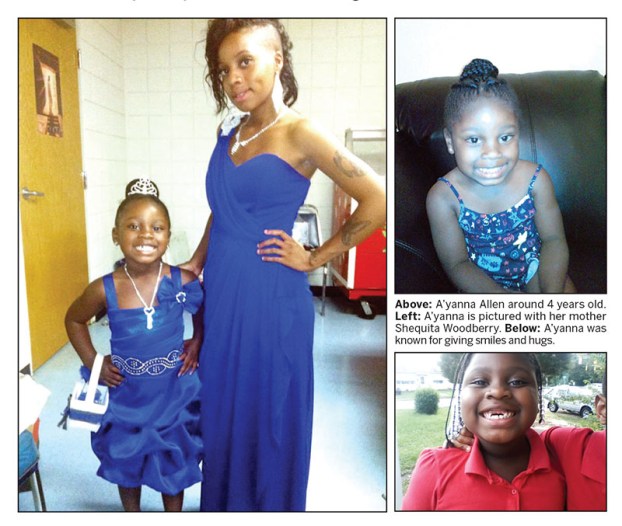 A’yanna Allen: Newsmaker of the Year 2016

SALISBURY — School is still out and many children haven’t grown tired of riding the bicycle they received for Christmas. Others continue to braid the hair of their new favorite baby doll — the one with the pink polka dot dress. Some children are outdoors enjoying the warm days that fill the rest of the holiday break.

The second-grader was shot and killed Dec. 4 while she slept in the bedroom she shared with her paternal grandmother, Shirley Robinson. The 56-year-old Robinson was shot in the leg. The Harrel Street home where Robinson has lived for years was littered with bullets.

Her death, fresh on the minds of not just family, but people who didn’t know the little girl, has been a tragic reminder of how violence can rock an entire community. Therefore, 7-year-old A’yanna Allen has been named the Salisbury Post Newsmaker of the Year.

The senseless killing of the Koontz Elementary School student has gripped Rowan County and left many more questions than answers. The murder has residents wondering why no one has been held accountable for her death.

A $20,000 reward remains on the table, yet no one has come forward with information that has led to an arrest. Police continue to investigate.

The Sunday shooting occurred around 4 a.m. just three hours after someone shot Sharod R. Mathis, 22, in the parking lot of Firewater Restaurant and Lounge. He was taken to the hospital and later died.

Police have since said the incidents at Firewater and Harrel Street are connected, but have not provided specific details. The only arrest in either incident remains that of Savannah Maria Queen, 21, for felony obstruction of justice.

Arrest warrants say that authorities asked Queen on multiple occasions about the firearm in the Firewater shooting and she denied knowledge of it. The warrants say she removed a firearm from the scene the morning Mathis was shot. She has since been released from the Rowan County Detention Center.

Hugs — it’s the one thing that everyone recalls about A’yanna. She loved to give them to anyone and everyone. She was remembered at her Dec. 11 funeral for making up games for her classmates to play or doing something funny to make them laugh and giggle.

Woodberry said her daughter was already faced with a challenge early in life because of the shooting death of her father, Antonio “Shug” Allen. Allen, 27, was killed Christmas Day in 2009 when A’yanna was just six months old.

“As she got older, the joy she had and the smile on her face showed me nothing could break her spirit. She didn’t let anything deter or discourage her,” Woodberry said.

She looks at her daughter’s picture every day and smiles. Woodberry can just picture A’yanna walking through the house dancing in the style of the popular song “JuJu on That Beat.”

“That was her favorite song,” she said.

A’yanna had the biggest heart and the kindest spirit, Woodberry said.

The young mother said she will be thankful when Salisbury Police, “get to the bottom of this.”

The shooting prompted the Rowan County Sheriff’s Office and the Salisbury Police Department to enter into a partnership to help fight crime in the city.

She’s not been satisfied with what A’yanna’s paternal family has told her, Woodberry said.

“Only A’yanna and God can tell us what really happened inside that house. I know God has my back,” Woodberry said.

Woodberry said she has felt A’yanna’s presence even a few days after the Dec. 11 funeral.

She said that’s all A’yanna did was tickle him.

“Nothing was supposed to stop my baby, but who knew a bullet would stand between her and success,” Woodberry said.

She said A’yanna was a warrior, a fighter, a champion.

“I just pray that God and the Salisbury Police Department continue to do their work,” she said.

A call to action

“A’yanna’s death appears to have been a wake-up call to the community in that a child who was so innocent was touched by violence,” said Salisbury Police Chief Jerry Stokes.

He added that “it’s no longer a violent crime problem for members of the community who we see as on the fringes, those labeled gang members or criminals. It came home to everyone because of her innocence and having no connection to what precipitated the act that took her life.”

Stokes said there was a call to action at the NAACP’s annual dinner recently.

“I think that should be true for the entire community. We need to seek ways to resolve our gun and violent crime problem so no other person or their family, whether we consider them innocent as we do A’yanna or not, is touched by tragedy,” he said.

Stokes said he too is outraged that the person or persons responsible for her death are “so callous that they chose to shoot into a home while a child was in the bed asleep.”

He said he cannot fathom any purpose for acting this way and hopes to see whoever is responsible held accountable to the fullest extent of the law.

“What we should do is seek to move forward and use this tragic incident to, as noted by the NAACP, call us all to action to combat the underlying issues that are bringing this injustice to the community. It should call us to say, ‘enough is enough’ and seek to stop the violence in the community,” Stokes said.

Ask about the children

Alvena “Al” Heggins, one of the people who spoke at the NAACP banquet, said this week that action is needed.

“What does one say about the violent death of an innocent child sleeping in her bed? Her death means not enough of us and our local institutions are doing what needs to be done to protect, preserve and grow our children,”  Heggins said.

Heggins, who has been vocal about improving the relationship between police and the community, is founder of the Human Praxis Institute, a Salisbury-based human relations firm that specializes in strategic planning, racial and equity training and mediation services.

Heggins said she draws on her African ancestry, noting how the Maasai Warriors greeted each other.

The warriors would say, “And how are the children?”

The hoped-for reply was, “The children are well.”

“First, do we ever ask about children other than our own? We should care for and value all the children. Second, even if asked, Salisbury can’t answer — with hearty confidence — that our children are well. We must eradicate the violence being inflicted on our children, families and community,” Heggins said.

She said the only way to start to heal is by understanding that “healing begins with us.”

“As community members, we have to love ourselves and our community enough to say ‘This stops now!’ We have a responsibility to report those among us engaging in violent behavior. Our City Council cannot allow our police officers to be used as tools to escalate violence in communities of color; it’s not fair to our police officers or to those living in fear of law enforcement.”

The City Council and city manager need to support the police chief in creating a plan jointly developed by the community and the police department, she said.

“By taking these steps, we honor A’yanna’s life. Her death does not fade from memory and we replace despair with hope, trust and healing,” Heggins said.

“At a time when so many things divide our community, the death of an innocent child unites us all. Each of us, regardless of our neighborhood, is hurt because senseless violence takes away a child,” Blackwell said.

She added that anytime there is a tragedy, the turning point comes when we change because of it.

“The underlying question must be, ‘What have we learned from this?’ If we shrug and move on, our community will continue to suffer,” she said.

One way the community can heal from such a violent incident and the other acts of violence that have taken place, Blackwell said, is simply “action helps grief.”

“When our community comes together and works together to resolve the issues that divide us, we’ll begin the slow process of healing,” she said.

Anyone with information in the shootings of A’yanna Allen and Sharod Mathis are asked to contact the Salisbury Police at 704-638-5333 or Salisbury-Rowan Crime Stoppers at 1-866-639-5245.

By Rebecca Rider rebecca.rider@salisburypost.com SALISBURY — Those who live and work near the Klumac Road extension may have noticed a... read more