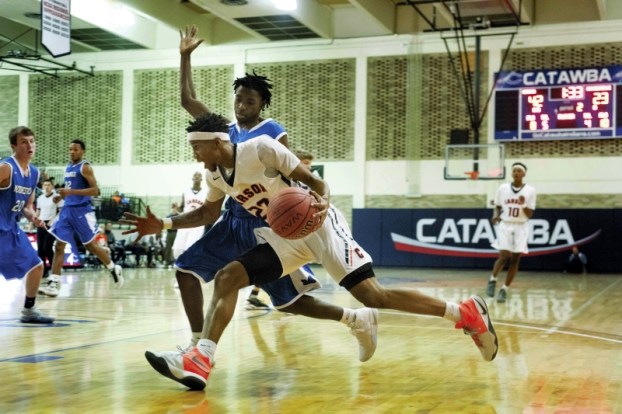 “I was getting up some shots at the Salisbury Y, trying to get my touch back,”  Westbrook said with a sheepish grin. “Then I got into a few pickup games and almost lost track of the time.”

Fortunately for a Carson team that’s playing short-handed without sharpshooting guard Cameron Prugh, Westbrook arrived before a semifinal matchup with Mooresville in the Dale’s Sporting Goods/Sam Moir Christmas Classic. Then Westbrook produced one of the games of his life, scoring 21 points, as the Cougars took an easier-than-expected 84-60 victory over the Blue Devils.

Westbrook was way off-target against East Rowan in the first round, scoring four points and lowering his scoring average to 8.0 points per game. But he raised it a bit on Thursday.

Carson is in the Moir boys championship game for only the second time. The Cougars lost to North Rowan in the 2013 title game.

“It was a good team game,” Westbrook said. “We kept pushing the ball and we kept getting stops. We built a nice lead.”

Carson took control of the game against the sixth-seeded Blue Devils (5-7) with a long stretch of solid play that began late in the first quarter and extended into the second. Westbrook brought the first quarter to an end with a huge, momentum-gathering slam for a 25-16 lead, and the hot-shooting Cougars kept it going from there.

“We played really well during that one nice run in the first half,” Carson coach Brian Perry said. “Then we were able to keep some separation the rest of the way.”

“We had a lot of key errors in the first half and early foul trouble hurt us,” Micklow said.

White had a burst at the start of the second half to push Carson’s lead to 18 points. Mooresville is talented and made some pushes at the Cougars after that, but Carson maintained a secure advantage.

The most pressure the Blue Devils could exert came when it was 71-58, a 13-point deficit, with 3:45 left, but that budding threat was road-blocked by a surprise 3-pointer by Westbrook.

“I didn’t think Westbrook would take that shot, and I kind of held my breath, but he made it,” Perry said. “It was like every time they get within striking distance, we’d kind of swat them away with another 3-pointer. Westbrook made some big ones and Cole made some big ones.”

The Westbrook 3-pointer that made it 74-58 dimmed Mooresville’s hopes considerably, and the driving “and-one” basket by Williams that followed was the back-breaker.

Carson avenged a one-point loss to the Blue Devils in last year’s first round.

Mooresville, 5-3 in its three seasons in the Moir, plays in today’s third-place game at 4:30 p.m., against Salisbury.