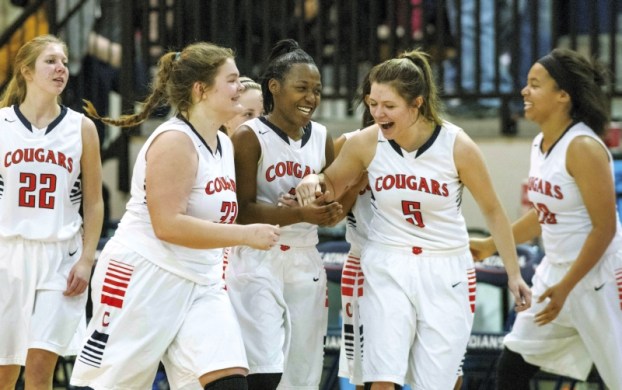 SALISBURY — West Rowan’s youngsters  did everything right for 28 minutes, but Carson’s veterans owned the last four and escaped with a 57-53 thriller in Thursday girls semifinal action in the Dale’s Sporting Goods/Sam Moir Christmas Classic.

“We were absolutely terrible for three quarters, couldn’t stop them and couldn’t buy a basket,” winning coach Brooke Misenheimer said. “But as disappointed as I was with our first three quarters, that’s how proud I was of my team in the fourth quarter.”

Second-seeded Carson had beaten the third-seeded Falcons (7-3) in a South Piedmont Conference game, 62-58, on Dec. 6, but West Rowan, which starts two freshmen and plays a third one a lot, has  more growth potential than an experienced Carson squad. West had taken four straight victories, including a good road win at Cox Mill, so this matchup figured to be a toss-up.

Early on, the only things getting tossed were the Cougars. West freshman Abigail Wilson owned the paint, and West was getting unexpected points from everywhere. Even with the Falcons’ top scorers, Egypt Alexander and Mary Sobataka, silent, West built a lead. Freshman Taylor Poole, Miyanah Pruitt and Shyann Vaughters drilled 3-pointers. The Falcons surged on top, 16-9.

West’s defense was getting it done also, stopping penetration from Gabriel  and forcing her to settle for 3-point attempts, while keeping McKenzie Gadson, Carson’s other consistent source of points, off the glass. Cindy Connolly, another West freshman, made a 3-pointer, and at halftime, it was West 27, Carson 20.

West showed no signs of weakening in the third quarter, and now Alexander was coming to life with lefty layups. When Poole flipped in a shot in the lane, the Falcons led by 11. Kailie Ketchie made shots that kept Carson afloat, but  West was still up 42-33 as the quarter closed.

A Taylor Wiggins 3-pointer pulled Carson within six early in the final quarter, but when Carson missed four straight free throws, it appeared the window for a comeback had closed. Wilson nailed two free throws with 4:19 remaining, the Falcons led 48-38, and it was desperation time for the Cougars.

“As bad as we’d played, it would’ve been easy to get frustrated, to just throw in the towel,” Misenheimer said. “But we didn’t. We kept plugging away.”

The turning point was a soaring three-point play by Gadson, who finally saw a lane to the glass for  a stick-back and made it count with four minutes left. That was the spark. That play cut a 10-point deficit to seven.

“We didn’t play as a team for three quarters,” Gadson said. “But that changed in the fourth quarter. We started playing together and fighting together.”

Two quick buckets followed — Gabriel-to-Gadson for a layup — and then Gabriel on a drive. Carson’s defensive intensity was picking up. West’s lead was down to 48-45 with 2:45 remaining.

“One point at a time we came back,” said Gabriel, who was playing with four fouls.

After Gadson took a charge, Alexander was whistled for her fifth foul  battling on the boards. That game-changing call led to a technical foul on West’s bench, and things started to unravel for the Falcons.

Carson had possession after the technical, down 48-46, and  senior Destiny Jackson came through with the biggest shot of her injury-plagued career. Jackson’s 3-pointer from the right corner, after a moment’s hesitation, ripped through the cords for Carson’s first lead of the day. It came with 2:10 remaining. Gabriel said she had  confidence in Jackson’s stroke.

“Olivia passed me the ball, and I had to ask myself if I should really take a shot that big,” Jackson said. “I’m glad that I took it.”

When West missed two free throws with 1:25 left, Gadson (10 points, 12 rebounds) ripped down the board, and Carson was able to employ its delay game. It’s not easy to handle Gabriel in chase situations, and her free throws and another West technical  — this one whistled on Vaughters, who had been scrapping for a rebound — moved the Cougars in front by five points.

Sobataka sank a long 3-pointer  from the left side with 5.3 seconds left to cut Carson’s lead to 55-53, but the Cougars were able to get the ball in Gabriel’s hands one final time, and she calmly made the free throws that put the Cougars in the championship game for the fourth time since 2010. Carson has never won the title.

“We didn’t do anything right for a long time,” Misenheimer said. “But it’s a 32-minute game. At the end, we made the big shots and we made the critical free throws.”

By Mike London mike.london@salisburypost.com SALISBURY — South Rowan’s girls demolished North Rowan, 63-25, in a running-clock game on Thursday, but there was... read more