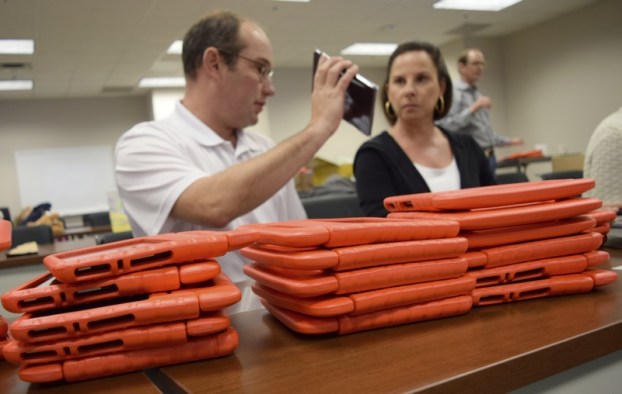 Jason Walser, left, talks with Missie Alcorn about preparing e-readers for the rollout of the Appleseed Project, a literacy initiative that she and husband Greg have launched for local children. Volunteers started modifying 600 devices Wednesday to distribute in January. Rebecca Rider/Salisbury Post

Appleseed set to grow: program prepares to roll out e-readers to 600 preschoolers Andrew Chambers loads software onto Appleseed e-readers Wednesday. It takes about 15 minutes to load each device with software that will turn them from a regular tablet to an e-reader for children aged 0 to 4. Each device has a personalized profile of the child who will receive it. Rebecca Rider/Salisbury Post Erik Lipscomb, Appleseed’s project manager, loads devices with software on Wednesday. The non-profit uses a Kindle Fire tablet as a base, but installs its own software and controls which limit use to pre-loaded litearcy tools and books for children. Games, videos and web-browsing are disabled on the devices, making them useless to adults, Lipscomb has said in a previous interview. Rebecca Rider/Salisbury Post

“The next month’s going to pretty much drive the next year,” founder Greg Alcorn said.

While the organization may be turning 1 year old, it’s only had the e-readers — modified Kindle Fire tablets — deployed at test locations for six months. But this week, Alcorn and his team are scaling it up — from 60 e-readers to nearly 600.

On Wednesday, a small and dedicated group of volunteers met on the top floor of the Wallace Educational Forum. While the school system was out for winter break and its offices vacated, Alcorn and his team had use of a training room to unpack, check and load 600 e-readers.

“We could not have done it where we’re HQ’d on South Main,” said Alcorn, who also serves on the State Board of Education and is CEO of Global Contact Services. He and Missie, his wife, are funding Appleseed’s launch.

For the past six months, at-risk children at two Head Start programs in Rowan County have been able to use the readers — which have been gutted and loaded with reading software, e-books and controls that make the device useless for anything except, well, reading.

The readers were given to families for free — provided they agreed to report back on usage and to let Appleseed collect data. And while that data is still being collected, Alcorn said he believed Appleseed received enough anecdotal evidence to scale up the project.

Starting in January, every child in one of Rowan County’s eight Head Start programs will receive an e-reader. Alcorn estimates that number comes out to about 465 children. The remainder of the e-readers will be given to Head Start teachers for use during classes and to Salisbury Pediatrics, which has been a supporter of Appleseed.

Jalica Stewart, center director of the Wiley Lash Head Start in Salisbury, has been working with the e-readers since June and said she and her teachers have already seen improvement. While the students receive instruction at Head Start for six hours each day, to really improve reading skills they also need to be practicing at home.

“A lot of them were not receiving that educational experience at home,” she said.

That’s where the readers come in.

The devices are equipped a wide array of age-appropriate books, apps that allow children to learn their letters, nursery rhymes and programs that will read aloud books while the student follows along.

At Wiley Lash, teachers have seen students who used to fidget during read-alouds sit still and pay attention. It’s helping them get used to the motion of turning a page, and Stewart said the program has seen an increase in letter recognition among children. While they may not have known their letters before, now they can trace them in the air — thanks to a similar program on the reader.

The goal is for students to be on grade level when they begin school. Studies have shown that at-risk children often fall behind their peers when it comes to vocabulary upon entering kindergarten — a gap that keeps growing through the years. Alcorn and Appleseed hope to close that gap.

Alcorn predicts it will take all week to prepare the devices, which come equipped with a profile for each child, a tempered glass screen protector and a durable, child-safe bumper case.

In a year, Alcorn hopes to have concrete data proving Appleseed’s success, as well as a source of funding. If all goes well, the plan is to distribute e-readers countywide to children who meet an at-risk profile — an estimated 6,000 students.

“We’re trying to prove that it’s scalable,” Alcorn said, “We don’t want to do anything without significance.”

O Christmas tree, wherever shall we ditch you?

By Amanda Raymond amanda.raymond@salisburypost.com SALISBURY – As the holidays wind down, some may be wondering what to do with old... read more