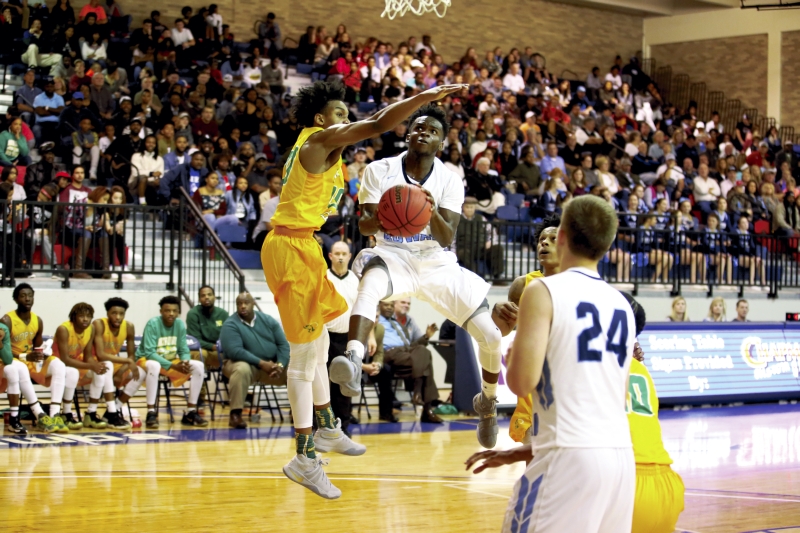 SALISBURY — West Rowan has shoehorned itself into the Dale’s Sporting Goods/Sam Moir Christmas Classic semifinals — even if it had to beat defending champion North Rowan twice to get there.

The fourth-seeded Falcons coughed up all of an 11-point halftime lead before rallying for a 58-47 first-round victory Wednesday night at Goodman Gym.

“Anytime it’s the green against the blue, it’s going to be like this,” coach Mike Gurley said after West (6-3) earned a second-round date with top-seed Salisbury tonight. “When they made that comeback, I told my guys, ‘Hey, North is good. Don’t be surprised by this. Let’s just play.'”

West responded with a 25-6 finishing kick over the last 10 minutes, while North (4-5) went scoreless after Dayjuwon Cooke’s turn-around jumper with 3:31 remaining drew the Cavs to within 49-47.

“We have to learn to execute down the stretch,” coach Andrew Mitchell said after North squandered a 41-33, third-quarter lead. “We had the lead and then started playing crazy. It happened really quick, in like a minute or so. You just can’t get comfortable against West Rowan.”

West initially took charge of the game in the second period, when it razzled and dazzled its way to a 30-19 halftime edge. The first-half highlight reel included a last-minute layup by 6-foot-8 junior Caleb Mauldin, who muscled inside for his 1,000th career point.

“We love having a big man like Caleb,” teammate Paris Hillie said. “As a point guard, if I ever feel we can’t get it done, we can always feed the ball to him. He gets it done.”

He had to after North used a 22-3 run to start the third quarter and raced to an eight-point lead. Cooke’s hang-10 jam got the party started before teammate Henderson Lentz found his stroke and nailed a 3-pointer from the left corner, trimming the Cavs’ deficit to one point.

“We came out (in the second half) and moved the basketball, making four or five passes on each possession,” Mitchell said. “That allowed people to get in their sweet spots and make shots.”

Hillie thought West must have left all of its first-half intensity in the locker room. “We laxed up, almost like we wanted to see what they could do,” he indicated. “We were just watching them.”

It was Hillie who triggered West’s second coming. The 5-9 senior stopped the bleeding — and a 14-0 North flurry — when he quietly made a layup with 2:10 remaining in the third quarter. A minute later, he beamed in a 3-ball from the right side. And when teammate Jayson Delgado stuck a 3-pointer with less than a minute on the clock, the Falcons had tied the score at 41-41.

“We just had to keep it loose,” Gurley said. “A tournament like this can get you tight fast. When someone like North hits you in the jaw like that, and you’re staggering a little bit, the lights get a little brighter and the crowd gets a little louder. That layup by Hillie relaxed us and allowed us to get our focus back.”

It all came into view in the fourth, when West took the lead for keeps on a Tyrese Lawrence layup with five minutes to play. Austin Love’s put-back made it 53-47 with less than three minutes to go. Perhaps the final straw for North came when high-scorer Joe Scott (17 points) was called for an offensive foul with 2:28 remaining.

“Whatever they did, it worked for them,” Mitchell said afterward. “For us, it’s what we didn’t do — execute down the stretch.”

Hillie said the key was adjusting to North’s adjustments. “We were in the back of the tunnel and couldn’t see the end,” he smiled. “Then we started chipping away and everyone could see the light. And then we started playing first-half basketball.”

And played it right until the end.