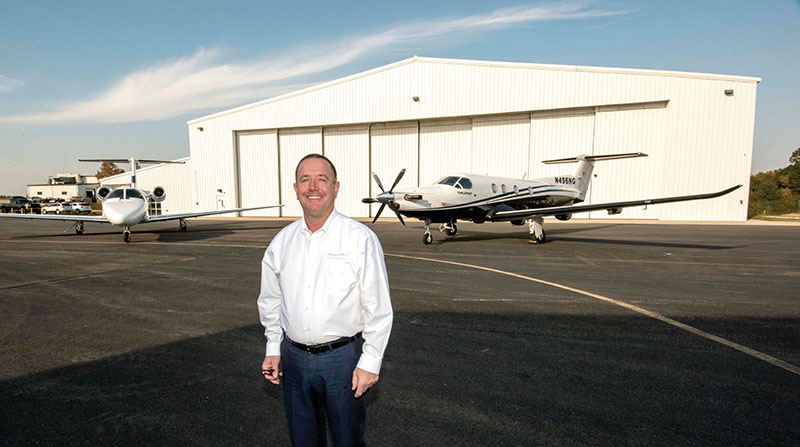 SALISBURY – Steve Setzer was not planning on moving his business, Strategic Moves Aircraft Management, to Salisbury.

It took encouragement from the Rowan County Board of Commissioners and the Thad Howell, Rowan County airport manager, to convince Setzer to move and become one of the county’s many businesses gained in 2016.

This year was a busy one for the business scene in the county. Some businesses closed their doors, others opened them and others still expanded and renovated their operations.

Overall, business leaders in the community agree that the year was a positive one for businesses in the county.

“I think that things are always positive in the business community,” Elaine Spalding, president of the Rowan County Chamber of Commerce, said.

She said there were significant business announcements made in the past year, including the expansion of Integro Technologies and Go Burrito establishing its headquarters in Salisbury and offering franchising opportunities.

The newly formed Minority Business Council has showcased successful minority-owned businesses in the county, and other businesses involved with the chamber have been doing well, Spalding said.

Robert Van Geons, executive director of RowanWorks, said the county has made good progress over the last year.

“I think by every measure, Rowan County has continued to make steady progress forward,” he said.

According to Van Geons, 9,000 more people are employed than numbers from 2008. Industrial vacancies are at an “all-time low.” And the past year has seen the development of new spec buildings and business expansions.

With businesses like Aldo Products and Bonded Logistics moving into the county and Boral Composites announcing expansions, Van Geons said there is a good mixture of growth and new businesses.

“A diverse economy is a good economy,” he said.

Van Geons is most proud of the partnership between Rowan-Cabarrus Community College, the Rowan-Salisbury School System and other community partners to bring job fairs and the NC Manufacturing Institute to the county, helping community members find long-term employment.

In Salisbury’s downtown area, there were important announcements, and new businesses moved into the area in 2016. Paula Bohland, executive director of Downtown Salisbury, Inc., said some businesses are still recovering from the economic downturn of 2008, but the downtown is generally doing well.

One of the biggest announcements of the year was Historic Preservation Partners Holdings, LLC, signing a purchase agreement for the Empire Hotel on South Main Street. The Shuckin Shack Oyster Bar helped bring the Washington Building in the 10 block of North Main back to life, with office space and apartment buildings on the second and third floors.

Other downtown highlights include high occupancy on North Main Street and steps taken to make a downtown park a reality.

Bohland said the energy and reputation of downtown has improved over the years. With projects like what is happening with the Empire Hotel and the Amtrak planning to add more routes and stops in Salisbury, Bohland was optimistic about the coming year.

“I feel very, very hopeful for downtown,” she said.

She said developing and encouraging downtown living will also help the area thrive in the new year and years to come.

Other businesses were more short-lived, including the Jerky Station, which moved to Boone in March, and Maracas’ Cuban Café.

Ryan’s Buffet caused a stir when it abruptly closed in August and the controversy around Auto House selling mislabeled vehicles ended with the business closing its doors late in the year.

Other businesses that closed were Magic Mart and Spring Robin Custom Framing and Needlework, while Bellissima moved from its downtown location to Winston-Salem.

A substantial loss of jobs came when the Daimler Trucks North America facility in Cleveland laid off more than 900 employees in January and 550 people in February, and a significant business icon was lost this year with the passing of Food Lion co-founder Ralph Ketner.

Salisbury also lost WSTP 1490 AM, which ended its broadcast after more than 76 years.

On the positive side, many new restaurants and shops opened and expanded over the past year.

New breweries and developments for the Washington Building and Empire Hotel were important for downtown Salisbury, but smaller businesses popped up in the last year as well, including City Tavern, The Brown Eyed Suzy, Winsome Hanger, Stately Homes and Timeless Wigs and Marvelous Things.

Other vape shops, pool halls, restaurants, grocery stores and health care facilities opened in Salisbury and the county over the year.

And more businesses are on the way for Rowan County. The Smoke Pit, a highly-anticipated barbecue restaurant in downtown Salisbury, has been teasing barbecue-lovers with pictures of their food for months on Facebook, but has still yet to open.

The former location of Pancho Villas restaurant is in the process of developing spaces for two new restaurants, one of which may be Buffalo Wild Wings, and a retail business.

Though highly controversial, The Abbey, a wedding venue, was approved to be developed on Sacred Heart Catholic Church’s former location on Fulton Street.

Van Geons said the investment in economic development by the county’s leadership is sure to increase the rate of economic growth in the future.

Spalding agreed, saying an economic development-minded group of county and municipal elected officials and proximity to Interstate 85 has helped bring new businesses to the area. She also said the county’s new brand is sure to help draw in even more businesses.