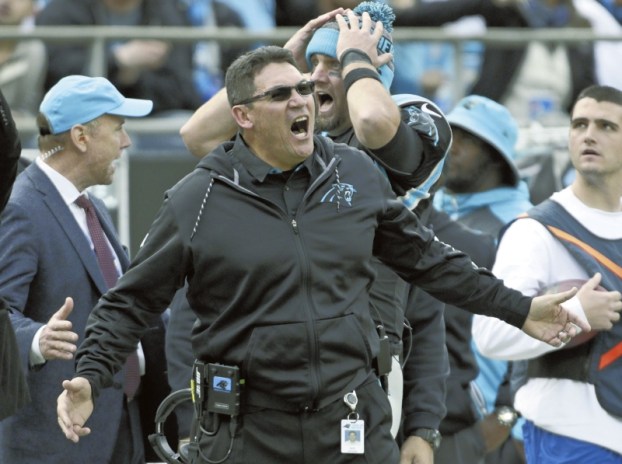 FILE - In a Saturday, Dec. 24, 2016 file photo, Carolina Panthers head coach Ron Rivera reacts to a call in the second half of an NFL football game against the Atlanta Falcons in Charlotte, N.C. The Panthers, despite being No. 1 in the preseason Associated Press Pro 32 rankings, never made it back to the Super Bowl. In fact, they didn’t even make it back to the playoffs, ending a three-year run as NFC South champions. (AP Photo/Bob Leverone, File)

CHARLOTTE (AP) — The Carolina Panthers’ future seemed bright even after a 24-10 loss to the Denver Broncos in Super Bowl 50 last February.

They were returning MVP quarterback Cam Newton , a vaunted defense led by middle linebacker Luke Kuechly, and their entire coaching staff from a team that started the 2015 season 14-0 and finished 17-2. Oh, and top wide receiver Kelvin Benjamin was coming back from a torn ACL, too.

What could possibly go wrong?

Despite being No. 1 in the preseason Associated Press Pro 32 rankings, Carolina never came close to making it back to the Super Bowl. In fact, the Panthers didn’t even make it back to the playoffs, ending a three-year run as NFC South champions.

“It is tough because you want to be part of the conversation. You really do,” Rivera said. “And we’d been part of it for three years. It is a tough pill to swallow, personally.”

Carolina’s defense struggled early on. Once the defense figured things out, the offense — the same one that led the league in scoring a year ago — fell into a deep funk and never recovered.

Newton’s MVP curtain call has been a fiasco.

One year after throwing 35 touchdowns and 10 interceptions, Newton has been limited to 18 TD passes and has 11 picks entering the season finale at Tampa Bay on Sunday. He’s completed a career-low 53.5 percent of his passes.

Teams have begun to figure out how to defend Newton, taking a blueprint from the Broncos in the Super Bowl by bringing pressure from all angles to disrupt and yet still contain the elusive Newton. Rivera suggested for the first time Monday that the pressure and the hits Newton received early in the season might have affected his accuracy.

Newton suggested last week that the team’s three straight trips to the playoffs may have taken its toll.

“We had a long run,” Newton said. “It’s time for guys to take a sabbatical so to speak and just get away from it.”

There will be many areas to address in the offseason, but Rivera believes the Panthers will be back in the postseason conversation soon.

“I believe this is a blip, I really do,” Rivera said. “This is one of those things — and I’ve said it to the team and I’ve said it before — if you don’t learn from this, then you’ve wasted it.”

Some things that went wrong with the Panthers season:

CONCUSSIONS GALORE: Injuries played a role in Carolina’s demise, particularly concussions. Starting left tackle Michael Oher never played after Week 3 because of concussion symptoms. Middle linebacker Luke Kuechly will have missed six games with a concussion, and even Newton sat out a game. In all, nine Carolina players were placed in the NFL’s concussion protocol and missed games this season.

NORMAN’S IMPACT: Rookie cornerbacks James Bradberry and Daryl Worley have improved vastly as the season has gone on, but the team was a mess early in the secondary after rescinding the franchise tag offer to 2015 All-Pro Josh Norman. With Bradberry and Worley battling injuries and going through typical rookie growing pains, the Panthers struggled in pass defense. Atlanta’s Matt Ryan torched Carolina for 503 yards and four touchdowns in Week 4, and New Orleans’ Drew Brees threw for 465 yards and four TDs two weeks later. Because of those big games, Carolina’s pass defense still ranks last in the league, allowing 274 yards per game through the air.

TAKEAWAY-GIVEAWAY: The Panthers weren’t nearly as opportunistic as last year, when they were plus-19 in the takeaway-giveaway category, by far the best in the NFL. Carolina’s defense forced 39 turnovers, leading to short fields for Newton and the offense. That didn’t happen this year, as Carolina has turned it over 26 times and taken it away 25.

OFFENSIVE LINE WOES: Rivera will tell you the most valuable non-skill position player on the roster is center. Ryan Kalil, the team’s co-captain and leader on the offensive line, an All-Pro last season, suffered a shoulder injury midway through 2016 and was placed on IR. Along with Oher’s injury, that left the Panthers scrambling for spare parts. By the end of the season the Panthers were on their fourth center. Newton has been sacked 33 times in 14 starts, and Carolina’s vaunted running game that totaled at least 100 yards in every game last season has dropped to 12th in the league.

LOSING LEADERS: Along with Norman, the Panthers also parted ways with some key 30-something veterans in the offseason: cornerback Charles Tillman, defensive end Jared Allen, safety Roman Harper and wide receiver Jerricho Cotchery. All four were starters last year and brought a wealth of experience to the team, along with leadership. It’s hard to know if that void in leadership contributed to the Panthers surrendering fourth-quarter leads and losing five games by three points or less.